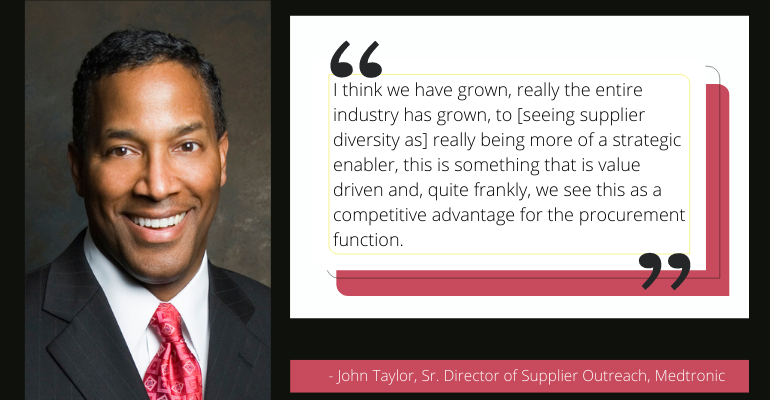 Medtronic spent 35% of its U.S. supply budget with small and diverse suppliers in 2021. Here's why that matters.

Not so long ago, diversity initiatives in many industries were handled as an afterthought or a box-checking exercise. Today, corporations of all sizes are becoming much more focused on diversity, equity, and inclusion as a core business strategy, and those efforts are translating into opportunity for minority and women-owned suppliers. In the medical device industry, Abbott and Medtronic are high on the list of top companies for supplier diversity.

DiversityInc ranks Abbott as the top company for supplier diversity, with Medtronic coming in at No. 5. Those rankings feed into DiversityInc's overall Top 50, where Abbott ranks No. 3 and Medtronic ranks at No. 10.

"I truly believe that supplier diversity has really evolved from the ‘check the box’ or – what's the phrase that was so prevalent in the 80s and 90s? It's the right thing to do," John Taylor, senior director of supplier outreach at Medtronic, told MD+DI. "But I think we have grown, really the entire industry has grown, to it really being more of a strategic enabler, this is something that is value driven and, quite frankly, we see this as a competitive advantage for the procurement function."

Medtronic recently reported that in 2021, the company spent $2.4 billion with U.S. small and diverse suppliers – which is 35% of Medtronic’s overall U.S. supplier spend. With that investment, the company supported nearly 28,000 jobs, and stimulated $4.3 billion in economic production activity.

"When I started in the supplier diversity industry greater than 20 years ago, it was all about the qualitative information," Taylor said. "Over the last several years, and especially at Medtronic, we’ve moved more to the quantitative piece. So, we have goals and objectives regarding not only the spend, but how many suppliers are we including in our RFPs? That goal right now is 75%."

That goal was originally set at 25%, he said, and the company has gradually bumped it to 75%.

By making supplier diversity a part of the objective from the beginning, companies like Abbott and Medtronic are putting themselves at a competitive advantage in the medical device industry.

"When we talk with our customers, yes it's important to have great pricing – and we do – but they also look at us and they're asking us what we are doing in this space," Taylor said. "And that becomes another lever that they use to determine whether or not they want to work with us."

One of Medtronic's suppliers that falls into the supplier diversity category is a Minneapolis, MN-based energy consulting firm that just rebranded itself from JIT Services to Sagiliti. Sagiliti helps companies reduce their utility costs and also helps them improve their sustainability metrics. Sagiliti CEO and Chairman Ravi Norman told MD+DI that Medtronic is one of about 15 multinational corporations on Sagiliti's client roster.

As a minority-owened business, corporations that work with Sagiliti are able to count that as part of their tier one diversity metrics, but Norman said Sagiliti then makes sure to create a multiplier effect.

"That comes from ... not just the their one spin, but the things that ultimately will impact everything from board representation, subcontracting, hiring, and I would even extend that to how many of our employees end up on nonprofit boards and putting volunteer hours into the community," Norman said. "So that multiplier effect from the dollars that come from the supplier diversity procurement endeavor is also very critically important."

Norman defines community as when people intentionally behave like they belong together, and he says that to create thriving communities, everyone needs to be able to participate in that process. 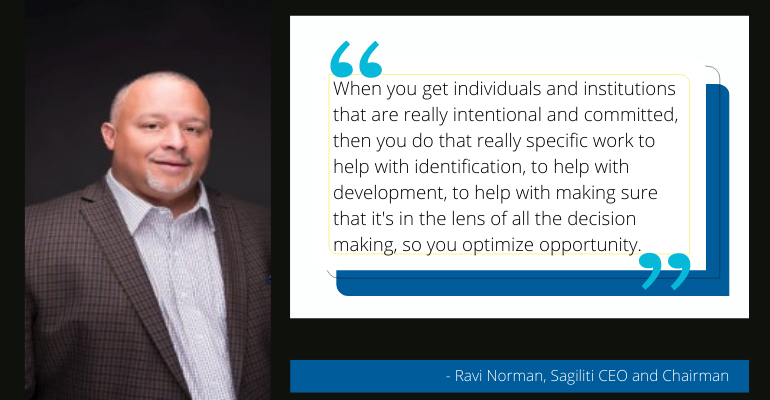 “There’s a saying that the best social service program in the world is a job, and the reason is because economics is so important," he said. "And I would actually say the best job is to be able to give the job, and the only way you can give the job is if you actually own that particular business or asset where the dollars and capital are flowing through. So the reality is, if we really want to create the mobilization opportunities, then they have to come through business ownership."

That's why supplier diversity programs that recognize companies for intentionally including minority-owned and women-owned businesses in the bidding process is so important.

"That, I would say, is one of the big differences I see from Medtronic maybe than some others is that intentionality," Norman said. "When you get individuals and institutions that are really intentional and committed, then you do that really specific work to help with identification, to help with development, to help with making sure that it's in the lens of all the decision making so you optimize opportunity. And I would say that is what's happening at Medtronic."

Norman said Sagiliti has been doing business with Medtronic since 2007.

"They were the first ones, I think, to to get us nominated for the Class IV Supplier of the Year, they were the ones that included us in their integrated performance report in 2020, they were the ones that nominated us for Corporate Plus designation when we could have been nominated by some others a long time before then ... they were the ones that invited us to their supplier conferences where they would only invite the elite suppliers ... they've invited me personally to be named to their Medtronic supplier advisory board so we're able to be part of setting policy and having exposure to the C-Suite and the executive level," he said. "I mean those are the type of intentionality things, in addition to carving out and finding the business opportunities, it's all helping us be marketed to others in the ecosystem."

Medtronic Is an Example of Why Diversity Matters
Sep 06, 2018