Sterilization Validation of an Isolator System 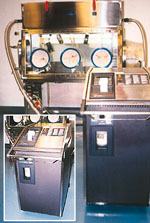 Isolation technology has been developing rapidly in recent years. Implemented in the pharmaceutical industry to raise the sterility assurance levels of aseptically manufactured products, the technology is also finding a niche in the medical device industry. Isolators can be custom designed and built to segregate a specific process, allowing aseptic manipulation of products without human intervention. Isolators meet predetermined performance criteria, including a sterility assurance level (SAL) of 10–3 to 10–6, depending on the application.

One method used to sterilize an isolator is vapor phase hydrogen peroxide. There are four phases in the sterilization process. The process begins with dehumidification of the air in the isolator chamber. In the second phase, conditioning, hydrogen peroxide (H2O2) from a generator is vaporized and injected into the isolator at a high flow rate. The isolator is usually at atmospheric pressure, but may be operated under a vacuum. The dispersion efficiency and vapor uniformity of the H2O2 are critical to efficient sterilization, which is the next phase of the process. When sterilization is complete, an aeration process removes all traces of H2O2 from the isolator.

The installation qualification phase of the validation program consists of an engineering evaluation of all equipment. It should include detailed documentation of the isolator system, complete with dimensions, internal configuration, and all materials used in construction. Comparable documentation of the H2O2 generator should be done separately. In both cases, the description should include a diagram of the unit layout, with interface and transfer systems clearly indicated and their dimensions given. The following items should be included in the documentation:

For the system to be fully validated, both the isolator and generator systems must operate as intended, which is the purpose of the operational qualification. During this phase of the validation process, all sensors, indicators, and other critical components are tested to ensure that they are operational and properly calibrated. In systems where more than one isolator is used, each isolator should be checked independently. Data should be collected on all critical operational parameters that affect operation. During operational qualification, users should:

Operational considerations for the H2O2 generator should include an evaluation of each phase of the sterilization cycle—dehumidification, conditioning, sterilization, and aeration—and establish the reliability of the following systems:

The actual operation of the isolator system is initiated in the performance qualification phase, during which several initial steps should be performed to ensure success. To begin with, a determination must be made of the appropriate cycle parameters given the isolator configuration, room temperature, and loading. Isolator systems need not be installed in a controlled environment, but because most isolators are influenced by their environment, they should be located in a room maintained at constant temperature and relative humidity. Access to the system should be limited to trained operators.

Because the half-life of the H2O2 gas decreases as the mass of the material in the load increases, operators need to determine the maximum fixed-load requirements for their specific system before validating the isolator. Fixed-load configurations will vary depending on isolator size and specific functional requirements. In a sterility test system, for example, the isolator would contain sterility test supplies appropriate for the number of tests to be performed each day. Operators should fill each isolator with the identified items while ensuring that the loading does not interfere with gas distribution. Items should be placed on stainless-steel shelving and separated to allow the maximum diffusion of H2O2. The most effective sterilization occurs on the surfaces of unwrapped items, such as glass and metal, but surfaces of wrapped items can be sterilized when packaged in Tyvek. Paper or plastic bags should be avoided.

After the load configuration is determined, temperature mapping should be performed to determine heat distribution. This is conducted during the dehumidification phase (when the isolator air is circulated through a drier). Thermocouples are placed throughout the isolator and among the items. Heat-distribution analysis identifies any cold spots within the isolator, enabling operators to calculate the maximum safe concentration of H2O2 that can be used without causing condensation. H2O2 concentration is dependent upon the temperature of both the room and the isolator. A dehumidification setting of 20% should be established. In some climates, achieving set points lower than 20% can add considerable time to the total sterilization cycle.

During temperature mapping, chemical indicators (CIs) should be placed adjacent to thermocouples to evaluate gas distribution. The color change from white to gray-violet, which indicates increasing H2O2 concentration, is gradual but should be complete within 25 minutes (Figure 1). CIs should be placed under the gloves, in folds of half-suits, within the load, and in the corners. Uniform gas distribution can be enhanced using fans mounted within the isolator.

Figure 2. Vapor phase hydrogen peroxide (VPHP) and water concentration (milligrams per liter) versus time in minutes, with fans on (top) and off (bottom). Scale for VPHP measurements is on the left vertical axis of each graph; the water measurements are on the right vertical axes.

Most generator manufacturers supply standard tables to aid in determining the proper H2O2 concentration. These tables indicate the maximum allowable concentrations for isolators of various sizes and take into account temperature, relative humidity, load mass, and flow rate. Using the tables, operators can select the proper cycle parameters for the dehumidification, conditioning, and sterilization phases.

In sterilization, the time in minutes required to reduce a microbial population by 90% is referred to as the D-value. Approximate D-values for different cycle parameters are available to isolator operators to help in the selection of appropriate injection rates and exposure times of H2O2. The D-value in most isolators falls between 2 and 5 minutes (Figure 3).

Once the proper cycle parameters have been determined, initial fractional H2O2 sterilization cycles can be run using biological indicators (BIs). The sterilization of all internal surfaces of the isolator, in addition to the external surfaces of the items placed inside, are validated as for any sterilization method, using resistant BIs. Bacillus stearothermophilus has been identified as the most resistant organism to H2O2 vapor sterilization. To validate to a SAL of 10–6, BIs with a spore population of 106 are used. It is possible that the carrier material for the BIs could absorb the H2O2; to prevent this from occurring, the spores should be inoculated onto stainless-steel coupons and packaged in Tyvek pouches. Also, the population of the indicators should be verified before validation.

At this point, operators are ready to determine the appropriate half cycle for H2O2 sterilization. One of two approaches can be used to accomplish this: users can perform sequential fractional cycles, increasing the gas-exposure time for each cycle, which is commonly practiced in EtO validation; alternatively, users can test exposed BIs in duplicate at intervals during a single gas exposure cycle. In the first approach, where all cycle parameters remain constant and only the gas-exposure time changes, the sterility of the BIs is tested after exposure to each fractional cycle; the gas-exposure time that yields a total kill of all the BIs is deemed the appropriate half cycle. In the second approach, users place media tubes and pairs of BIs in the isolator's worst-case location. At the start of gas inject and every 2 minutes thereafter, the BIs are placed in the media tubes. Meanwhile, controls are also exposed to assess the effect of the gas on the growth of the BIs. The time which produces total kill of all BIs is then selected as the half cycle gas-exposure time.

Once the half cycle gas-exposure time has been determined, three consecutive cycles should be run using BIs and thermocouples. Sterility testing should yield all negatives (no surviving BIs) to successfully validate the selected cycle parameters. The appropriate BI growth controls should all be negative and media growth promotion tests should be positive.

After acceptable sterility levels are achieved, a full cycle should be run to determine the time required to completely aerate the isolator. The goal during aeration is to reduce H2O2 gas to an acceptable level, typically 1.0 ppm or less. When injection of the gas ceases, the generator's catalytic converter breaks down the H2O2 gas into water vapor and oxygen. The aeration time depends on the isolator volume, the mass of adsorptive material, and the rate of outgassing from the materials. Creating higher air-exchange rates by using the generator fan can optimize aeration rates. Aeration efficiency can be routinely monitored in the sterilant return lines using a semiquantitative Drager gas detection tube capable of detecting H2O2 gas between 0.1 and 21 ppm.

Several times during the validation process, regeneration cycles may be required to remove humidity from the drying agent. This phase takes approximately 18 hours and should be performed overnight so as not to interfere with the scheduled cycle runs. The lower the drier capacity, the longer the dehumidification phase will be.

Several additional tests must be performed to demonstrate that the gas does not penetrate product containers, supplies, environmental samples, etc. Wrapping items in metal foil or placing them in a sealed container will prevent contact with the sterilizing agent, but note that wrapped items must be previously sterilized by other means since the H2O2 gas cannot reach the product. Both sterility test media and environmental control media must pass growth-promotion testing. It is essential to demonstrate that exposing the test articles to H2O2 sterilization does not interfere with the ability of the sterility test to detect low levels of organisms.

The maintenance of isolator sterility over time should be established and continually monitored. Monitoring should involve a schedule of routine sampling. For example, sampling could occur on the first day after isolator sterilization, on each subsequent day of use, and on the last day of operation. Surfaces can be sampled using premoistened swabs and with settling plates placed within the isolator during operation. It is always advisable to check the fingers of gloves and all transfer ports. Periodic inspection of gaskets, ports, and gloves to detect imperfections are also an important part of maintenance. Worst-case situation tests, including loss of power to the isolator or the transfer of additional supplies, also should be performed during routine sampling tests. And finally, since the primary route of contamination within the isolator is through the addition of supplies, special precautions must always be taken to ensure that only sterile items are added to the isolator.

Nieskes, Rick. "Validation of a Hydrogen Peroxide Gas Decontamination System for Isolators." The Booth Validator 2, no. 5 (1995).

Anne F. Booth is the principal consultant in her own firm, Booth Scientific Inc., a company that provides GMP and sterilization consultation for medical device manufacturers. She holds a master's degree from the University of Michigan and is an active participant in numerous industry organizations.