Research efforts are under way to use novel materials that can emulate the simplicity and function of human muscles.

At the University of New Mexico Artificial Muscle Research Institute (AMRI; Albuquerque), there is a full-scale plastic skeleton named Mr. Boney, who moves in a manner much like that of any human. Created by researchers at the university, Mr. Boney is powered by artificial muscles actuated by a chemical fluid that is pumped by a microprocessor-controlled heart. The AMRI Web site offers video clips of Mr. Boney riding a bicycle, a whimsical display of current efforts to apply advanced materials technology to the challenge of creating synthetic muscles. 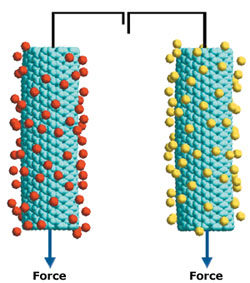 The application of an electrical charge to single-walled carbon nanotubes produces a direct conversion of electrical energy to mechanical energy through a material response.

In addition to exposing polymer gels to specific solutions to cause them to flex and contract, passing an electric current through a material can induce a similar effect. In simplest terms, the action is caused by electrical attraction and repulsion. Until recently, polymer-based materials were the foundation of most artificial muscle research. Most projects were focused on maximizing the polymer material's response in terms of reaction speed and strength.

Much of the current research involving synthetic muscle technology is attempting to increase the degree to which the material responds to electrical or chemical stimulation. Qi-Ming Zhang, PhD, associate professor of electrical engineering at the Pennsylvania State University Materials Research Laboratory (University Park, PA), has conducted research to compare the use of piezoelectric and electrostrictive materials in a number of applications, including artificial muscles.

Zhang's research work has focused on poly(vinylidene fluoride-trifluoroethylene) copolymer, which was developed originally for thin-film blood-storage bags. Zhang notes that, although the material displays quite limited piezoelectric properties, its electrostrictive characteristics have been found to be pronounced.

In further studies, Zhang found that the material could be altered to increase movement in response to applied voltage. He found that bombarding the material with electrons altered its molecular conformation and created new chemical bonds. The electron bombardment inserts defects into the material, making it more compliant and flexible, according to Zhang. The process also increases the material's dielectric constant. He notes that most existing electrostrictive materials are brittle ceramics that break with excessive movement. The altered polymer material is capable of movement that is 40 times greater than some of the best known materials and is simpler and less expensive to manufacture.

Research at Rensselaer Polytechnic Institute (Troy, NY) has resulted in a method capable of reducing the time required for a polymer material to respond to the application of electric fields. The technique is a significant advance in the development of artificial muscle. The response time of polymeric gels and conducting polymers to electric fields has been quite limited until recently. Polymer-based "muscles" required at least three seconds and often longer to respond to electric impulses. Polymer "fingers" capable of lifting an egg, for example, required up to 20 minutes to perform the task.

By infusing polymer gel with electrorheological fluid (ERF), which stiffens to a solid in response to an electric field, Sonja Krause, PhD, professor of physical chemistry at Rensselaer, and Katherine Bohon, PhD, found that the polymer was capable of responding in 100 milliseconds. This approaches the time in which human muscles react to signals from the brain. The ERF contains cross-linked polyethylene oxide particles suspended in silicone oil. "We decided to mix an ERF with an elastic polymer to take advantage of the ERF's rapid response and the mechanical strength of the polymer," Bohon explained. After testing several combinations, the researchers mixed 40% commercial ERF with 60% poly(dimethyl siloxane). Flexible electrodes were placed in the composite gel. When subjected to a 1-Hz ac electric field of 3000 V/cm, the material began to compress with a response time well within the range of human muscle. Bohon explained that the method is based on the rapid response of "millions of tiny polymer particles in combination with the elasticity of a gel."

Although the system responds rapidly, its strength remains limited. An additional challenge is to develop ERFs that will respond to lower voltages than the initial version. More recently, Krause and Bohon created an electromechanical actuator using a commercially available ERF and cross-linked poly(dimethyl siloxane) surrounded by flexible polymeric electrodes. When a low-frequency ac field was applied, electrode movement was double the applied frequency, and the actuator was found to be capable of moving objects weighing 1 g.

AS FAST AS HUMAN MUSCLE AND TWICE AS STRONG

The challenge of making artificial muscle with strength equal to that of a human's is being addressed by Mo Shahinpoor, PhD, an engineering professor at the University of New Mexico and head of AMRI. Shahinpoor has succeeded in developing artificial fibers said to be twice as strong as human muscles.

The fibers are each made up of several thousand individual strands and are created from polyacrylonitrile, which deforms in response to pH changes. According to Shahinpoor, the fibers are heated to 4500°F to form cross-links and boiled in sodium hydroxide to make them elastic, a process that binds the fiber within a gelatinous mass. The mass is then encapsulated in latex and bathed in water. The ionic-polymer fibers, encased within the latex shield, are bathed in a chemical solution and contract or expand in response to changes in the solution's pH.

Adding sodium hydroxide or another base causes the fibers to stretch to as much as twice their original length. Acid results in the fibers contracting nearly as fast as human muscles and with twice the strength, according to Shahinpoor. Use of computer-controlled pumps that regulate the flow of acid and base into the muscle make it possible to regulate and program the muscle's activity. The invention has been used to move a plastic skeleton's limbs, says Shahinpoor, who sees "tremendous possibilities" for the artificial muscle.

Shahinpoor believes that such artificial muscles can be "packaged into virtually any shape or size," and that muscle for use in human applications could become a reality within five to 10 years. Patents have already been filed on the technology, which could eventually have a number of medical uses. Among the potential applications are actuators for prosthetic limbs that could offer a smoother and more natural movement, artificial sphincters for treatment of incontinence, and a method for encasing the heart with synthetic muscle in lieu of transplant procedures.

One of the most recent advances in the development of synthetic muscle is based on use of a relatively new material, carbon nanotubes. The carbon nanotube is described as an extended buckminsterfullerene molecule, or "buckyball," the spherical molecule constructed solely from 60 carbon atoms that was synthesized in 1985 by Richard Smalley, PhD, and Sir Harold Kroto, PhD, who were 1996 Nobel laureates in chemistry for the discovery of fullerenes. Discovered in 1991 by Sumio Iijima, PhD, nanotubes are composed entirely of carbon atoms and, because of their molecule structure, provide exceptional strength.

The research currently involves the use of a simple nanotube production technique that produces a nanotube "paper," based on processes developed by Smalley. Described as macroscopic actuators composed of billions of individual nanoscale actuators, these sheets function as a nanotube array in a fashion similar to natural muscle. According to the researchers, "Predictions based on measurements suggest that actuators using optimized nanotube sheets may eventually provide higher work densities per cycle than any previously known technology."

Describing nanotubes as being "actually seamless cylinders of graphite," Baughman says "the development of carbon nanotube muscles is in its earliest stages, but our recent demonstrations show us that this technology could be game changing for a host of key applications." He explains that, "In general, with any type of actuator, there are trade-offs between rate, modulus, and actuator response."

Baughman emphasizes that there are distinct performance advantages displayed by the use of carbon nanotubes. "With polymer-gel actuators, there are generally very-large volume and dimensional changes, but they are slow. They achieve high strokes, but low modulus." He adds that, "The nanotube actuators provide high work density per cycle."

While demonstrating a remarkable work capacity per cycle, the nanotube-based muscle requires far less electrical stimulation to function. "In terms of required application of power, the energy needed for the nanotube actuator is a full order of magnitude lower than that of polymer gel," says Baughman. He adds that, although most thin-film actuators require about 30 V to function, the nanotube material being developed requires approximately 1 V for actuation and about 4 V at most.

According to Baughman, there is a broad range of potential applications for the carbon nanotube material. Although a number of questions remain to be resolved, including biocompatibility issues, medical applications could eventually include improved actuators for prosthetic limbs and use in powering artificial hearts. He emphasizes, however, that the project is in its "very early stages." The nanotube actuators under study are the first prototypes and will require extensive testing before any of the potential advantages that the technology may provide for practical applications can be assessed.

The human muscle is a phenomenal example of engineering. The movement of blood within the body triggers the contraction of muscles to generate energy. As simple as this physical system may be, it has yet to be fully duplicated by artificial means. With the introduction of new materials—polymers that are more supple and responsive, or carbon nanotubes that offer tremendous performance yet require little energy—duplicating the function of muscles is likely to be achieved.

The technologies offer great promise for meeting a variety of medical challenges. Some researchers predict that powered prosthetic limbs will be made to move more naturally and with smaller energy requirements. Others suggest that layers of synthetic muscle tissue wrapped around a patient's heart may one day support the existing muscles sufficiently to serve either as a bridge to transplant or to obviate the need for a replacement organ.

Back to the MDDI main page