The Australian government has issued a warning about cobalt-chromium femoral heads manufactured before 2011. Is a U.S. recall announcement next? 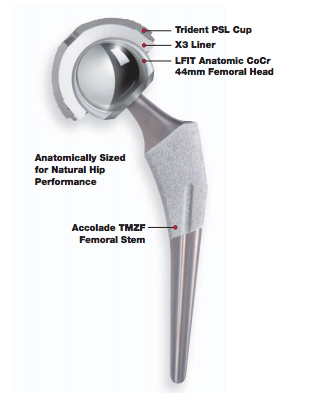 The Australian government has issued a hazard alert about possible adverse events associated with a Stryker hip replacement part.

Some U.S. law firms have written posts online regarding the Australian warning about Stryker Orthopaedics' LFIT Anatomic CoCr V40 femoral heads, which is used in a metal-on-polyethylene hip implant system. A lawyer from one of the firms claimed that he had a letter written by Stryker to a U.S. surgeon and containing multiple pages listing affected lots, but declined to share it for fear of releasing the surgeon-recipient's name.

A recall of the femoral heads "known to be used on both Accolade TMZF and Accolade 2 stems as well as Meridian and Citation stems," is "imminent,"  predicted physician/lawyer Shezad Malik, writing for theDallas-Fort Worth Legal Examiner. Malik did not return a call seeking further comment.

FDA has not recently issued any alerts or disseminated any company recalls regarding the devices in the U.S., according to an agency spokeswoman. Stryker did not respond to inquiries about the product.

However, FDA's MAUDE database lists more than 100 adverse events associated with Stryker's LFIT Anatomic CoCr V40 femoral heads from January 2011 through September 2016, several of which listed wear or corrosion of the cobalt-chromium head and trunnionosis as reasons for revision surgery. Trunnionosis is an adverse reaction to metal debris in the body.

The reports of stem fracture and disassociation of the femoral head from the stem may be due to such corrosion, writes attorney Cal Warriner of  the Florida law firm Searcy Denney Scarola Barnhart & Shipley.

"When the connection between these two pieces becomes corroded within the body, the potential for a catastrophic dissociation increases significantly," writes Warriner.

The Australian Department of Health Therapeutic Goods Administration statement cited some LFIT Anatomic CoCr V40 femoral heads manufactured before 2011 as "having a higher than expected incidence of taper lock failures." The taper lock is the part of the implant that connects the femoral head to the femoral neck.

The effects of such failures could include loss of mobility, pain, inflammation, adverse local tissue reaction, dislocation, joint instability, broken bones around the components, leg-length discrepancy, and the need for revision surgery, the agency said. The issue has been identified in four products, "while three other products with similar specifications have also been included in the hazard alert as an additional precaution," its statement added.

Stryker recalled nearly 5,600 LFIT V40 COCR implants in 2008 for potential increased risk of stem neck fracture in instances when the V40 + 16mm offset femoral head is mated with certain Accolade TMZF femoral stems in patients classified as overweight or obese, according to the MAUDE database.

Stryker is already paying more than $1.4 billion to settle thousands of patient lawsuits related to its Rejuvenate and ABGII artificial hips, which it recalled in 2012. The company warned surgeons at the time that those devices could harm tissue around the hip and cause other health problems.