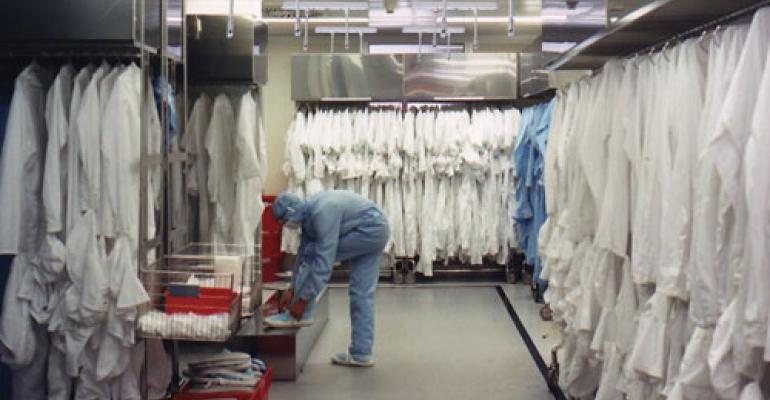 Operating personnel enter gown-up rooms to prepare for entry into the final cleanroom environment where the medical devices are processed. Without any static mitigating techniques, the operators and their clothing are statically charged, causing substantial particle attraction. If these particles are not eliminated at this point, they remain statically attached to the operating personnel, are carried into the cleanroom, and can wind up eventually on the products being manufactured, causing yield losses and/or rework.

To achieve the lowest possible particle counts in a cleanroom, it is critical to remove as many particles as possible in the gown-up room. Simple air showers or blowers have proven not to be very effective in this regard, as the particle attraction forces are typically stronger than the blow-off operation (with regular air). When ionization is used to eliminate the static attraction root causes, particles are loosened and can be eliminated before entering the cleanroom (see Figure 1).

Similar static attraction issues can, of course, exist inside the cleanroom as well. When plastics or other insulative devices are contacted, rubbed, or handled, they generate tremendous static charges. When these products are charged, they attract drastically more particles to their surface than their noncharged counterparts.

What is Ionization and How Does it Help?

Air ionization is the most effective method of eliminating static charges on nonconductive materials and isolated conductors. Air ionizers generate large quantities of positive and negative ions in the surrounding atmosphere, which carry charge into the air. As ions flow through the air, they are attracted to oppositely charged particles and surfaces.

Neutralization of electrostatically charged surfaces can be rapidly achieved through the process.

Air ionization may be performed using electrical ionizers, which generate ions in a process known as corona discharge. Electrical ionizers generate air ions through this process by intensifying an electric field around a sharp point until it overcomes the dielectric strength of the surrounding air. Negative corona occurs when electrons are flowing from the electrode into the surrounding air. Positive corona occurs as a result of the flow of electrons from the air molecules into the electrode.

Insulative materials such as plastics, glass, rubber, and ceramic will not dissipate their charge when grounded. Only bringing air ions close to their surface via ionization equipment removes the charge, which resides on the surface of the insulator.

Ionization equipment employed in a gown-up room loosens the particles on personnel by eliminating the attraction force, and a majority of the previously adhered particles will literally fall off the person and their clothes due to gravity—even in the absence of any additional airflow. Incorporating additional ionized air flows (e.g., ionizing air showers, ionizing blowers) is effective at eliminating even more of the unwanted particles from entering the cleanroom.

Many different types of ionizers exist in the marketplace. As with most technologies, some types are better than others for certain applications. To remove particles from people and their clothing in gown-up room applications, consider room system ionization equipment, overhead ionizing blowers, and vacuum systems to collect particles.

Room System Ionization Equipment. A common and quite effective technique for preventing particles from entering the cleanroom is to outfit the gown-up room with a complete room ionization system. In this approach, ionizing pods attached to the ceiling in a grid formation generate the ionization. All areas in the gown-up room are covered with ions, removing static charges on all objects, people, and particles. There is no additional air flow associated with such ceiling pod systems. Waves of positive and negative ions are generated and can travel long distances in this arrangement. (A typical ceiling configuration for room ionization systems is shown in Figure 2.)

The ionization pods should be located so as to bathe personnel for the maximum amount of time during the gown-up process. Hand-washing sinks and the benches where footwear is put on are areas where personnel spend more time in a stationary position, so it is a good idea to place pods above these stations.

Vacuum Systems to Collect Particles. Once particles have been eliminated from personnel via the ionization techniques mentioned, it is best to remove them entirely from the gown-up room, so they cannot relocate on personnel at a later point in time. Underneath the overhead ionizing blowers described, an industry standard blue tacky floor mat can be used to catch and retain the particles that have fallen off the personnel. A much more effective—although costlier—approach is to implement a floor-mounted vacuum vent that personnel stand on beneath the ionizing blower.

Most manufacturers use a double-bag packaging technique to keep incoming product clean. In principle, this is the correct approach. However, care must be taken to avoid static attraction issues. Widely across the industry, no precautions are taken (unfortunately).

First, the double-bagged product typically comes from a warehouse area into a transfer room for staging. There are typically enormous amounts of particles on the outside of the outer bag due to it being highly charged in the warehouse, attracting particles continuously while charged. The outer bag is then removed and discarded. Without ionization in place here, the inner bag is also highly charged and attracts particles found in the transfer room as well as from the outside bag that is removed.

Inside the cleanroom, the single bag is opened and the product inside is then exposed. Charge redistribution takes place, and particles on the outside of the bag can rush inside the bag and end up all over the product (and also throughout the cleanroom).

To avoid these incoming issues, ionization should be used in the transfer room to bathe and blow off the outer bag before its removal. Ionization can also be used to bathe the inner bag as soon as it is exposed, so it does not attract particles while it sits in the transfer room. Room ionization, overhead ionizing blowers, and ionizing guns (or a combination of all of three) can all be used to effectively remove particles from the bags. The bottom line for particle control is to ensure the static charges are always removed during the bag removal processes and to keep the inner bag free of charge during the entire length of time it sits in the transfer room.

In the final stage of manufacturing, finished product is sealed in its packaging and then placed into its inner bag in the cleanroom. Many facilities then move the single-bagged product out of the cleanroom and into the transfer area, where it is covered with the outer bag. Because the inner bag is typically charged, particles in the transfer area are attracted to the outside of the inner bag before the outer bag is applied.

The attraction of particles to charged product is also a worry in the cleanroom. Ionizing the gown-up and transfer rooms is only a piece of the puzzle. It is necessary to ionize the cleanroom for full elimination of static-related contamination, which is historically the biggest root cause of particle contamination in the medical plastics industry.1

Implementing ionization solutions in medical device manufacturers’ gown-up rooms and transfer rooms is a significant first step toward reducing particle contamination. From these two low-cost implementations, particle counts are reduced in the cleanrooms and yield improvements result. Implementing total ionization coverage throughout all areas in the facility provides the maximum benefit for particle contamination reduction. By implementing these steps, the facility can acquire in-house data on the immediate effectiveness of ionization, enabling good future decisions for the implementation of additional ionization for the cleanroom and other areas.

Roger J. Peirce is manager of technical services for Simco-Ion Technology Group, an ITW company. Previously, he provided electrostatic discharge/electrostatic attraction (ESD/ESA) consulting services to the semiconductor, medical device, and electronics manufacturing industries for ESD Technical Services, a consulting company he founded in 1986. Peirce co-founded Voyager Technologies in 1983 to design innovative ESD test equipment and began his 13-year career at Bell Labs in Murray Hill, NJ, in 1970. He holds 10 U.S. patents and has authored and published more than 20 technical papers on ESD/ESA.