Study Results: SABIC Shows How a Sterilizable Resin Can Be Used in Medical Devices

An experiment shows that a healthcare-grade polyetherimide resin can be used with low-temperature hydrogen peroxide-based sterilization methods.

Healthcare facilities, providers, and OEMs currently use several different processes to sterilize thermoplastic materials in medical devices, surgical instruments, and medical packaging. Whether they use gamma radiation, ethylene oxide, steam autoclave, or a hydrogen peroxide process to sterilize a plastic medical device depends on many factors. The primary factor to determine sterilization is the frequency at which a device is to be used and subsequently sterilized. Further considerations are the efficacy of the method and the corresponding cost, cycle time, and ease of use. Users must also consider the devices material of construction, its compatibility with the process, and whether the device contains sensitive electronic or optical components that cannot be exposed to high temperatures or moisture without damage.

The use of hydrogen peroxide plasma and vapor sterilization has placed a new set of durability demands on thermoplastic materials and retention of mechanical and appearance properties. The demands are stringent. Healthcare products such as sterilization trays are expected to have a use life of at least 250–300 sterilization cycles, which represents a single service year. In addition, improvements in the hydrogen peroxide sterilization technology have extended its use to a wider range of medical instruments to include medical devices with lumens and hinges.

The PEI resin blend was specifically developed for healthcare applications. It features hydrolytic stability and can withstand 2500 steam autoclave cycles at 134°C. It contains 50-ppm morpholine but retains transparency and ductility. The resin has been the subject of several technical papers discussing its development, the details of resin morphology, and its mechanical properties.3 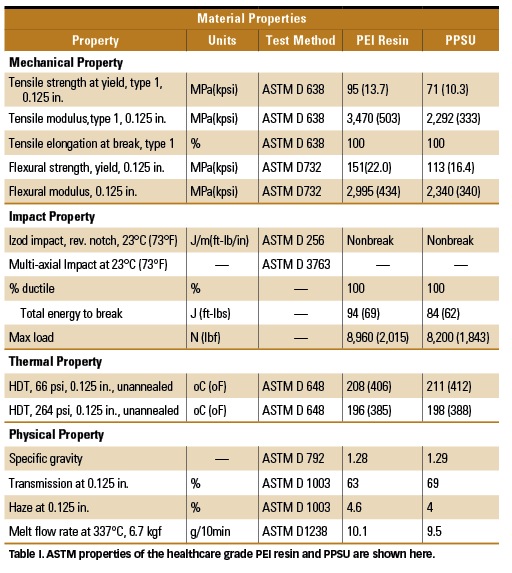 Resin grinds of the natural healthcare-grade PEI resin and a grade used for injection molding of a competitive polyphenylsulfone (PPSU) were individually formulated and blended with colorants to produce white, gray, or blue resin and dried at 120°C for eight hours prior to compounding. The resin blends were compounded using a 2.5-in, 40:1 vacuum-vented single-screw extruder with barrel temperatures from 325° to 360°C at the feed throat and die head respectively. The resin blend was processed at 160 rpm and 90 A using a mild mixing screw. The extrudate was water-cooled and chopped into pellets for further processing by injection molding. 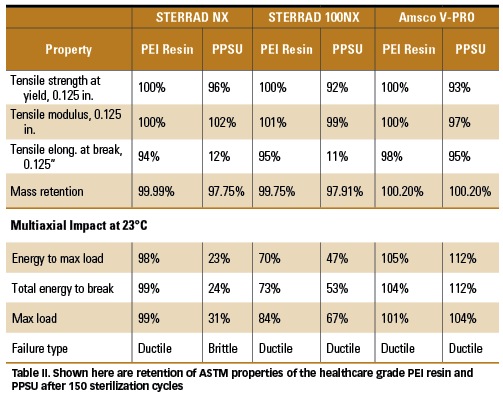 A 180-tn injection-molding machine with a 5.25-oz barrel was used to mold ASTM samples for tensile, flexural, HDT, Izod, and high-speed multiaxial impact testing. The healthcare-grade PEI and PPSU were molded at 375°C after drying for 8 hours at 150°C. An oil-thermolator was used to heat the cavity and core sides of the mold to a surface temperature of 150°C. Screw rotation ranged from 60 rpm to 80 rpm with 0.3 MPa back pressure without screw decompression after screw recovery. A typical cycle time of 32–35 sec resulted and was dependent on the specimen molded. In this work, samples were all 3.2 mm (1/8 in.) thick. 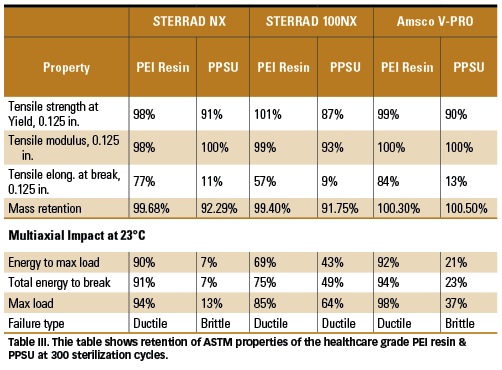 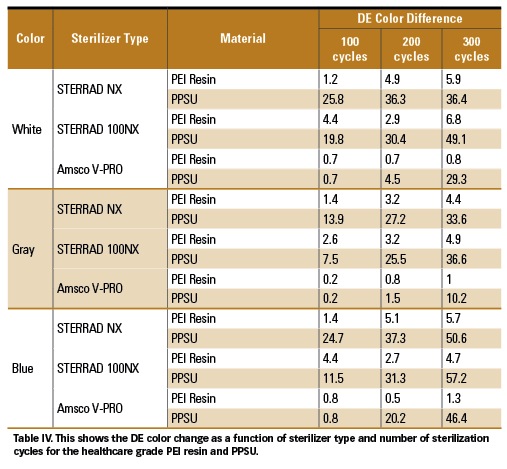 Material test samples were removed from the sterilizers and evaluated in increments of 50, up to 300 sterilization cycles. Type I tensile bars and 102-mm diameter, 3.2-mm thick molded disks were tested according to ASTM standards. In addition, white, blue, and gray chips of each material were color matched using L, a, and b color indices within a DE of <0.4 of a color standard. Pigment loading of the healthcare-grade PEI resin and PPSU were adjusted to match a color standard, so they appeared as the same color. The color chips were placed in the chamber and removed and measured with a MacBeth CE7000 spectrophotometer using a 10° observation angle under illumination at a 65° angle to measure color indices and report DE to evaluate color retention with respect to a standard and number of sterilization cycles.

Mechanical properties of the healthcare-grade PEI resin and PPSU after 150 and 300 sterilization cycles in STERRAD NX, STERRAD 100NX peroxide plasma, and Amsco V-PRO peroxide vapor sterilizers are reported in Tables II and III. A significant difference in performance levels between the materials resulted. Tensile yield strength retention, as compared with initial values prior to exposure of the healthcare-grade PEI resin after 150 cycles was 100% compared with PPSU, which ranged from 92–96% based on sterilizer type. As the number of sterilization cycles increased to 300, tensile strength retention of PPSU continued to decrease, ranging from 87–91%, with STERRAD 100NX plasma resulting in the largest reduction. In contrast, the healthcare-grade PEI resin remained robust, with tensile strength retention ranging from 98–101%.

In a similar fashion, tensile modulus was unaffected after 150 cycles at 100–101% retention for the healthcare-grade PEI resin with a reduction to 98% after 300 cycles. However, PPSU tensile modulus was reduced by 7% after 300 cycles in a 100NX sterilizer. Tensile elongation at break, a mechanical property that can be sensitive to different sterilization methods and an indicator of ductility, was significantly reduced in PPSU with retention of only 11% and 12% after 150 cycles in a NX and 100NX sterilizers, respectively. Amsco V-PRO required an additional 150 cycles to reduce elongation retention from 95% to 13%. Test results for the healthcare-grade PEI resin are in sharp contrast to PPSU with 94% and 98% retention after 150 cycles with a reduction to 57% and 77% in a plasma system while maintaining 84% in a vapor sterilizer after 300 cycles. The results were consistent with PPSU becoming brittle, whereas the healthcare-grade PEI resin remained ductile.

The change in mass (weight), as shown in Tables II and III, was made to assess the materials compatibility with hydrogen peroxide sterilizers as a function of sterilization cycles. The healthcare-grade PEI resin maintained its mass throughout the 300 plasma sterilization cycles with less than 0.6% change for a 99.4% retention with no effects on surface appearance. Etchings on the surface made prior to sterilization remained with no change in appearance. However, there was a dramatic change in PPSU, which resulted in a mass loss of 2.25% and 2.09% after 150 cycles and 7.71% and 8.25% after 300 cycles in NX and 100NX peroxide plasma sterilizers respectively. In addition, surface roughness of PPSU increased and the usually transparent natural color changed to a translucent, near opaque, red-brown color as shown in Figure 1 (p. 66) after exposure to the plasma and vapor sterilizers. All surface etchings were not visible in the PPSU samples and were removed during the plasma sterilization process. The vapor hydrogen peroxide sterilizer did not result in any loss of mass for either material.

Multiaxial, high-speed impact properties of the healthcare-grade PEI resin and PPSU after hydrogen peroxide sterilization was consistent with tensile and mass retention properties reported for each material. The total energy to break the healthcare-grade PEI resin was excellent, with retention exceeding 91%, 73%, and 94% after 300 sterilization cycles for NX, 100NX, and V-PRO sterilizers respectively. As presented in Table I, the resulting failures were ductile. In comparison, PPSU samples were brittle, causing the fracture to result in several pieces after 150 cycles in an NX plasma sterilizer with energy to break retention of 24%. This decreased further to 7% after 300 cycles. In contrast, PPSU’s exposure to a 100NX sterilizer reduced total energy to 53% after 150 cycles and 49% after 300 cycles. The samples remained ductile, which was in contrast to results obtained with an NX sterilizer. The largest effect on multiaxial impact results was with a V-PRO vapor sterilizer, which reduced the retention of total impact energy from 112% to 23%, and failure type from ductile to brittle as the number of cycles increased from 150 to 300. The healthcare-grade PEI resin may be capable of performing more than 300 peroxide sterilization cycles.

Color retention was measured poststerilization to determine stability of each material. As presented in Table IV (p. 72), the DE color difference was tabulated as a function of material, color, sterilizer type, and number of sterilization cycles. The greater the DE value, from 0, the larger a change in color indices L, a, and b as compared with a standard. The measured change indicates the  extent of color shift after sterilization. The healthcare-grade PEI resin demonstrated color stability with consistent results obtained after 300 cycles in an NX and 100NX peroxide plasma sterilizer with results within 1 DE unit for a specific color and ranging from 4.4 to 6.8 DE for all colors evaluated. PPSU was much less stable, with a very large DE color change ranging from 33.6 to 57.2 DE (approximately a 10 × difference in performance levels between materials). The striking difference in appearance is visually presented in Figure 2 (p. 70) and Figure 3. Overall, the healthcare-grade PEI resin demonstrated color stability to the V-PRO peroxide vapor sterilizer after 300 cycles with the DE ranging from 0.8 to 1.3, while PPSU’s color change ranged from 10.2 to 46.4. The difference in performance is presented in Figure 4. The healthcare-grade PEI resin had significantly better color stability than PPSU for the white, gray, and blue samples, which represent most healthcare colors.

Color stability of natural transparent healthcare-grade PEI resin and PPSU were evaluated in a similar fashion as the opaque colors. The natural healthcare-grade PEI resin color change was small after 150 and 300 cycles in all three peroxide sterilizers, with a DE of 0.8 and 2.1 for NX plasma sterilizer, 2.6 and 2.6 in the 100NX, and V-PRO vapor sterilizer of 1.1 and 1.5 respectively. Color stability of the base resin was very good, which contributed to the overall stability after colorants were added to produce opaque colors. Color stability of natural PPSU was poor, with large changes in DE after 150 and 300 sterilization cycles. PPSU’s DE after NX sterilization was 47.7 and 61.2. The 100NX color change was 16.6 DE and 34.4 DE while the V-PRO sterilization DE color change after 150 and 300 cycles was 1.8 and 38.3. In general, the color-change difference between the natural resins was greater than 10 ×.

The healthcare-grade PEI resin has demonstrated its utility in STERRAD NX, STERRAD 100NX, and Amsco V-PRO as a material that is robust and compatible with low-temperature hydrogen peroxide plasma and vapor sterilization processes. Evaluation in STERRAD NX, STERRAD 100NX plasma, and Amsco V-PRO vapor systems of at least 300 sterilization cycles demonstrated the material’s ability to retain mechanical properties, color, and appearance after repetitive sterilization. The resin may be capable at a greater number of cycles. The healthcare-grade PEI resin significantly outperformed PPSU, a competitive material.

The healthcare-grade PEI resin provides flexibility for healthcare product designers and OEMs to use several sterilization methods such as steam sterilization at 134°C, gamma irradiation, and ethylene oxide, as well as peroxide plasma and vapor sterilization. The material is biocompatibile per ISO 10993 or USP Class VI and has EUFC approval.

Mark Sanner is a chief scientist at SABIC’s Innovative Plastics business in Mt. Vernon, IN. For the past 10 years, he has served as a product developer in high-performance plastics, first with GE Plastics and now with SABIC. He has developed and commercialized more than 15 grades for the ULTEMTM product line. He received a PhD in chemical engineering from the University of Idaho.

Robert Gallucci is a chief scientist with SABIC’s Innovative Plastics business. His received a PhD from Princeton University and his undergraduate degree is from the City College of New York. He has developed many new commercial thermoplastic products and holds more than 100 U.S. patents. In addition, Gallucci has written three book chapters and 39 refered papers.

Scott Davis has worked in materials engineering, testing, and polymer processing for the past 25 years. He did his undergraduate work at the University of Vermont and earned an MSc in mechanical engineering from University of Illinois, Urbana-Champaign.