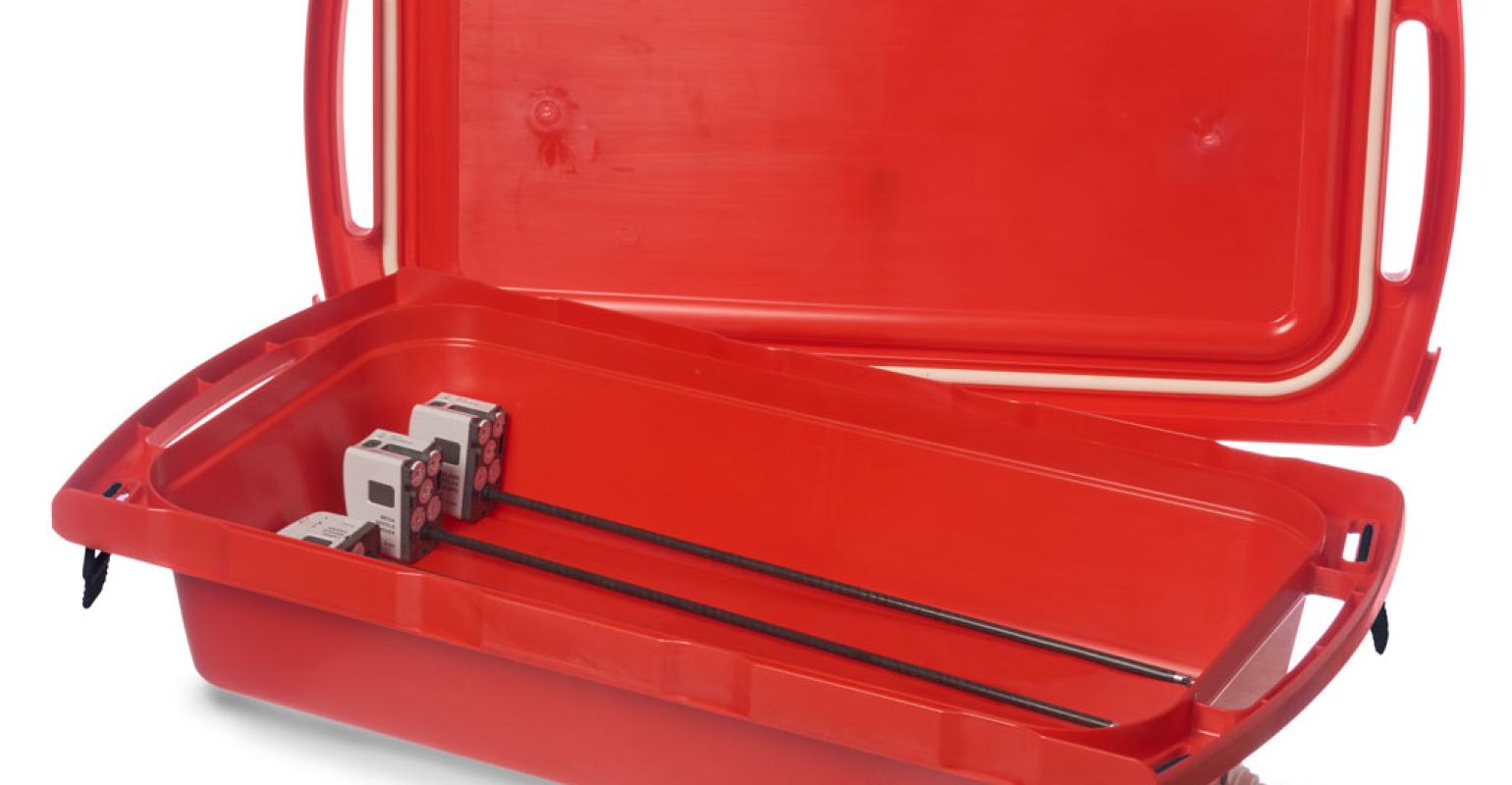 The InstruSafe XL Transport Container for soaking and transporting long surgical instruments. Images courtesy of Summit Medical, an Innovia Medical Co.
The growth of laparoscopic procedures and robotic-assisted surgeries drove the need for a larger container that could facilitate a new soaking step in reprocessing.

Requirements for reprocessing certain reusable surgical instruments have changed. Some manufacturers are now instructing reprocessors to soak certain instruments in a pre-enzymatic cleaner. The implementation of this soaking step is further complicated by the growing popularity of laparoscopic procedures and robotic-assisted surgeries, which typically involve use of very long instruments. “It’s difficult for facilities to comply with the instructions for use because there really haven’t been containers large enough for such long devices,” Kevin McIntosh, president of Summit Medical, told MD+DI. Before such long devices became commonplace, reprocessors typically used a sink basin or purchased something from a hardware store.” But even the latter wasn’t really ideal, he explained, because “these generic containers might have chemicals in the plastic that could leach out.”

To help users meet these new soaking requirements for long instruments, Summit Medical, an Innovia Medical Co., has developed the new InstruSafe XL Transport Container designed to accommodate da Vinci SP, XiScopes, EndoWrist, and other long laparoscopic surgical instruments. The XL Transport Container is the newest addition to the InstruSafe Instrument Protection family. The new container had its public debut during the AORN Global Surgical Conference & Expo in April and then demonstrated at the IAHCSMM Annual Conference.

McIntosh is thrilled to “be able to add something new to address a problem looming for some years,” he said. “It is also another way to provide protection [for staff] from soiled instruments.”

The InstruSafe XL Transport Container features an inner gasket, a splash-proof lid, and four silicone latches to reduce spills along with a drain to accommodate soiled liquid removal. “Fluids cannot escape during transport” to the reprocessing area, said McIntosh. “We wanted to protect the instruments, but we also felt it was important to protect users from the biological tissue on the instruments. That drove the need for the container to be well sealed.”

Summit selected a material that was compatible with sanitation processes and temperatures and provided impact resistance, McIntosh explained. The company identified a copolymer that could handle the repeated cycles, and “extensive” drop tests and shipping tests were conducted, he said. The system was also tested “to some extent” according to ISO 10993, he added.

To ensure that the new container design would meet user needs, company representatives worked with “key accounts to observe how large instruments were being processed,” he said. “Design requirements came from users.” The XL container also features similar organizing and nesting mechanisms used throughout the InstruSafe Instrument Protection family.

The driving need for the InstruSafe XL Transport Container was its larger size of 30 in. in length. But now that an IntruSafe design has been developed specifically for accommodating instruments for robotic surgery, the company anticipates future models for smaller instruments.

For its range of InstruSafe Instrument Protection Trays (an example of which is shown below), Summit has 510(k) clearance for seven different sterilization modalities. “Companies can partner with us to put their devices in our 510(k) cleared trays,” he said. The company can also develop custom-designed containers. 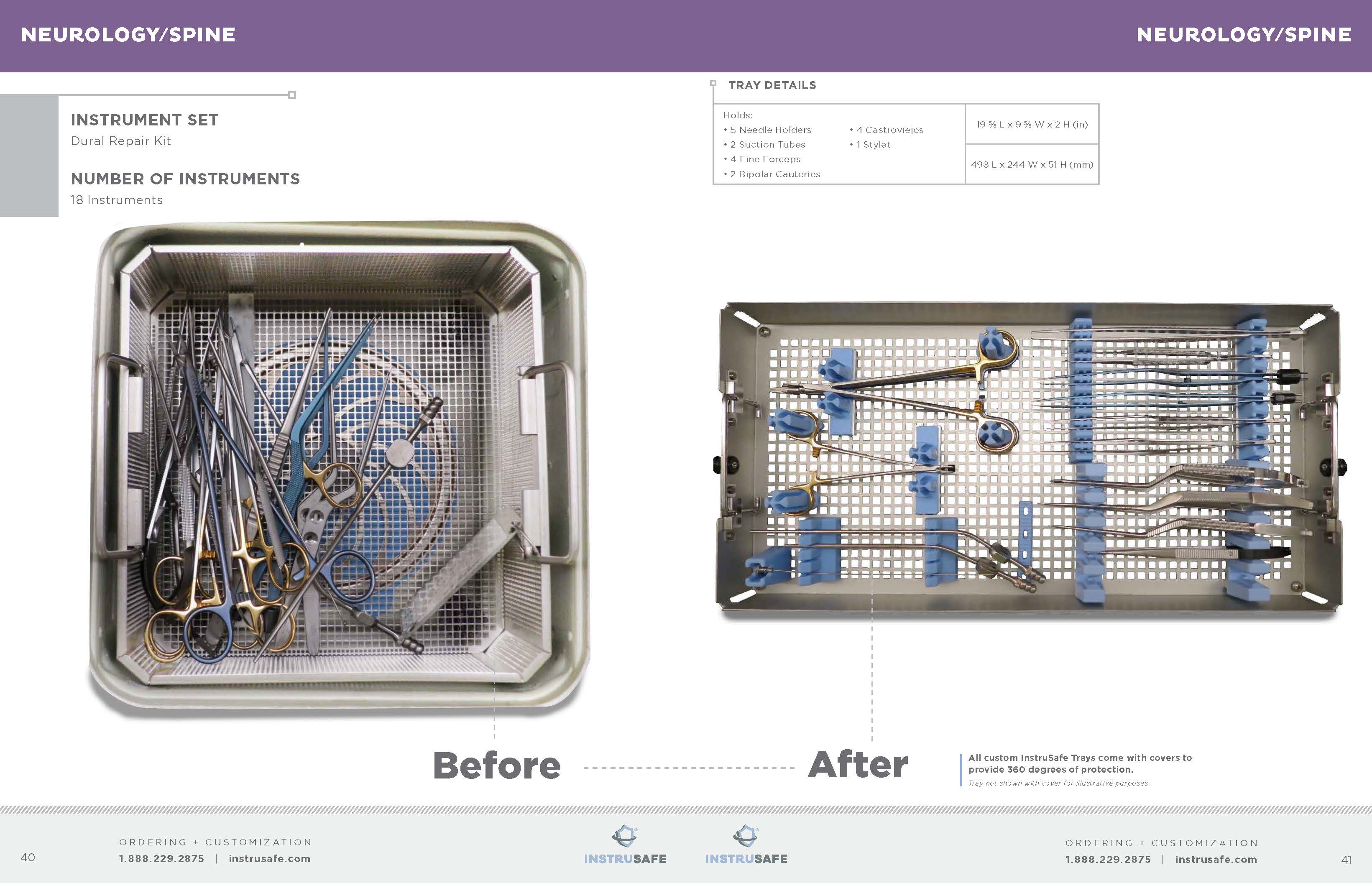