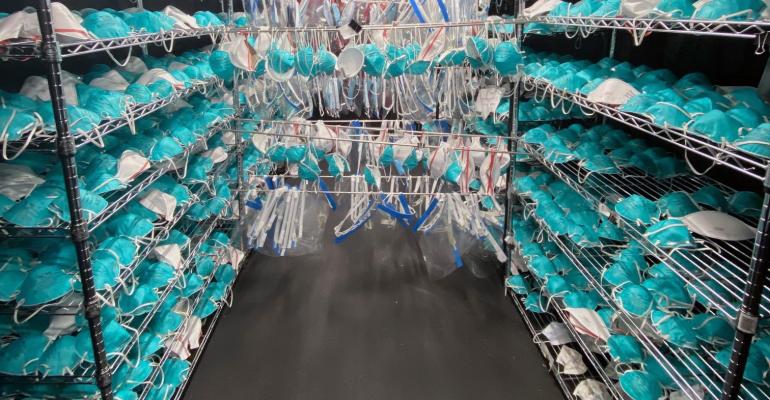 FDA has granted Emergency Use Authorization (EUA) to Battelle's CCDS Critical Care Decontamination System for processing up to 80,000 respirator masks per system each day.

CCDS employs concentrated, vapor-phase hydrogen peroxide (VPHP) for decontamination. The system has been validated to decontaminate masks of SARS-CoV-2, the company reported.

The masks are placed on shelves inside a container, and a portable, external VPHP system is hooked up to the outside of container. The system was first envisioned by Battelle as part of a study commissioned by FDA in 2015. That study involved determining the feasibility of N95 respirator mask decontamination in the event of a personal protective equipment (PPE) shortage in a pandemic. The FDA study showed that VPHP decontamination using the same system parameters and critical end points as the current system resulted in 6-log reduction of G. stearothermophilus while not degrading the filter performance of N95 respirators for multiple decontamination cycles, Battelle reported in a news release.

"We have proven that VPHP is effective at decontaminating N95 respirator masks up to 20 times at large scale," said Matt Vaughan, president of contract research at Battelle. The masks are exposed to the validated concentration level for 2.5 hours to decontaminate biological contaminates, including SARS-CoV-2, the company reported.

Battelle is currently examining whether other supplies such as surgical masks and ventilator components can be decontaminated using this process.

The CCDS is operating at Battelle's West Jefferson, OH. Battelle has been working with OhioHealth, headquartered in Columbus, to develop logistical and operational aspects of the system. Battelle will also process respirator masks for other major systems. "We will work with each healthcare system to ensure that the process is followed," Vaughan told MD+DI.

When asked whether the FDA EUA would lead to FDA 510(k) clearance or approval, Vaughan said "the system is operating under an Emergency Use Authorization, which is intended to cover a severe shortage of PPE under a pandemic. When supply chains for new PPA return to normal, we expect that Battelle CCDS will no longer be needed."

However, there could be learnings from using the VPHP system that could translate to other uses of VPHP for other medical devices, even outside of a pandemic. "We are doing other experiments in parallel with the decontamination work we're doing on N95 masks," Vaughan said.

"We're grateful for the support of our state and federal officials and other business partners," stated Vaughan in the press release. "All parts of Battelle are working extended hours and weekends to ramp up manufacturing and operation of the Critical Care Decontamination System. Our partnership with Central Ohio healthcare systems has been crucial to working out critical details."

Added Lou Von Thaer, president and CEO of Battelle: "I want to thank the FDA team for their professionalism and help in authorizing the use of our technology at this critical moment for our nation. Everybody who has worked on this project shares the same goal of protecting first responders and healthcare workers who are at the front lines of the pandemic."