The company says it would have recalled them earlier if it had known of the danger. 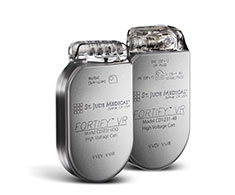 After learning of battery problems with thousands of its implantable cardioverter defibrillators, St. Jude Medical continued to sell outdated versions of the devices for 17 months, according to a report in the Star Tribune of Minneapolis.

The company recently recalled the devices, whose batteries can run out within 24 hours of the low-battery alert, according to a company statement. Two deaths have been reported. St. Jude called the early battery depletion a "rare occurrence" (0.21%) with the ICD and CRT-D devices, which were manufactured before May 23, 2015.

The actual number of devices with premature battery depletion is unknown, according to FDA and St. Jude Medical, but a total of 349,852 affected devices remain actively implanted worldwide, includingan estimated 199,642 in the U.S., according to FDA.

When FDA approved St. Jude's design change, it appeared that the firm did not need to initiate a recall, FDA spokeswoman Deborah Kotz said in an email.

"Available data available regarding the rate of overall adverse events indicated the risk to patients was low and was considered consistent with overall rates observed with other makes and models of implantable defibrillators," Kotz said. "Manufacturers are not required to initiate a device recall for changes to medical devices that are not in violation of the Federal, Food, Drug and Cosmetic Act (FD&C Act)."

Lithium batteries provide charges to the devices' capacitors, which deliver the high-voltage shocks that bring a patient's heart to normal rhythms. The chemical reaction that occurs results in the formation of lithium particles that can deposit in a location that causes a short circuit,that could lead to premature battery depletion over the course of a day to a few weeks, the company explained.

The design change was made to the insulation inside the battery, adding an internal barrier to address the risk that a lithium deposit could cause a short, it added.

St. Jude executives told the Star Tribune that they worked to address the battery issue as quickly as possible with the information they had. The company began working on the issue after it was first revealed in a December 2014 journal article, according to the newspaper.

St. Jude also acknowledged that it continued to ship old devices for 17 months after changing the design to lower the risk of rapid battery depletion, the report says.

"We have a device that at that time is performing well, and we are making it even better," St. Jude chief medical officer Mark Carlson, MD, told the newspaper in describing the company's reasoning behind its May 2015 decision not to alert the public to the design change. "If we had known, or the [St. Jude] Medical Advisory Board had known in 2015 what we know in 2016, I'm sure that their advice and our actions would have been very different."

ICDs and CRT-Ds are both implanted under the skin in the upper chest area with leads that go into the heart. Patients need an ICD or CRT-D if their heart beat is too slow (bradycardia), too fast (tachycardia), or needs coordination to treat heart failure.