Philips and Salesforce Have a Plan to Transform Cloud-based Healthcare 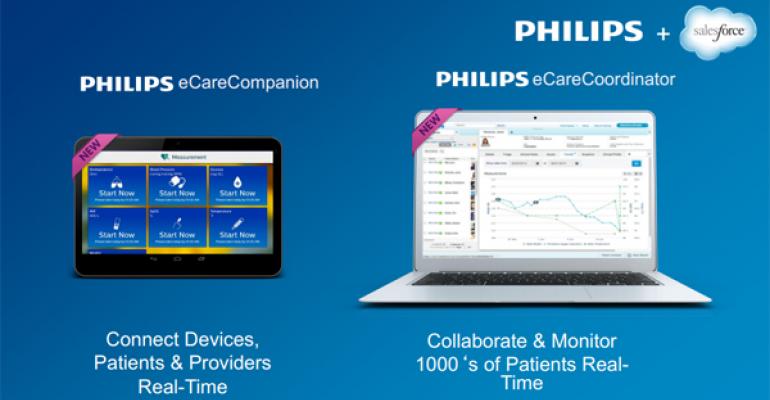 Philips and salesforce are aiming to create the definitive cloud-based healthcare platform.

Healthcare technology company Philips has announced a partnership with saleforce.com, a leading provider of custom relationship management (CRM) software that both companies say will leverage cloud technology to transform communication between patients and care providers.

Based on saleforce's Salesforce1 Platform for connecting apps and consumer devices, the companies have developed a new, open cloud-based platform for medial device and data interoperability. The hope is to integrate apps and devices that run the entire healthcare gamut from diagnostic devices to self care and treatment devices, including wearables and fitness-related apps and devices. Imagine Apple's HealthKit or Google Fit, but targeted directly at medical technology and patient care.
“There were 190 million patients monitored by Philips in 2013,” Royal Philips CEO Fran van Houten said in a webcast announcing the partnership.” We monitor over 1 million patients on an ongoing realtime basis...We think, in the future, patient relationship management will be at the center of delivering healthcare.”
“You really don't have to go any father than seeing what happened at the Google I/O conference with the next genration of sensors and all kinds of wearable technology to understand how w're going to see an even more connected future,” Marc Benioff Charman and CEO of saleforce.com said. Benioff stressed that this move is about creating true interoperability and to get medical devices and wearables out of their respective silos. “It's more than wearables, or senors, it's more than social networks, it's building a new cloud platform,” he said. “And we can see the necessity of that platform when we see incredibly new technology like what we saw from Apple with their HealthKit announcement."
Jeoren Tas, CEO of Philips Healthcare Information Services, was on-hand to discuss two products, eCareCoordinator and eCareCompanion, that have already been developed through the Philips/salesforce partnership. EcareCompanion consists of a tablet and app that patients will have at home. It will consistently engage them by having them take surveys about their health, asking them to check their vitals, and checking in on medication compliance.
Whenever a patient's vitals are taken with a connected device or if they miss a medical dosage, a real-time alert is sent to eCareCoordinator, where live team members can see a patient's stats, interact with the patient, and even consult other team members on a course of action. “We've implement a smart algorithm that allows the patient with the highest acuity to come up first,” Tas said. Tas said that both these products are in the final stages of compliance testing and coming to U.S market later this summer.
The day will soon approach when the majority, if not all, of your medical devices, particularly in the home care setting and for chronic conditions, will be connected. While industry anticipates FDA guidance on interoperability this deal between Philips and salesforce looks like a strong push toward integrating your healthcare into the Internet of Things and making it a part of your personal data ecosystem.
Philips and salesforce have already opened up the API for their new platform for developers. Time will tell whether this will be the truly open integrated system that patient-consumers are demanding. In today's battle of brands – most recently seen with new developments from Apple and Google–there is an understanding among companies that the platform that can attract the most talented and exciting developers will also be the one that attracts the most consumers. Google announced some big hardware partnerships and Apple has gone as far as to create a whole new programming language, Swift, to attract developers.
An alliance between Philips, a dominate healthcare technology company and salesforce, a dominate cloud-based technology company should turn developer heads in the medtech space. Both companies say however that they've garnered a strong degree of interest not only from healthcare providers and patients themselves (as evidenced by Philips's strong presence in the patient monitoring space) but also from insurance providers. van Houten stated that moving toward a more efficient, cloud-based model of healthcare delivery “ does mean that some money flows will shift” but added that “we believe we know from insurance companies that they are very keen and interested to shift toward these new care delivery methods.”
-Chris Wiltz, Associate Editor, MD+DI
[email protected]
TAGS: News
0 comments
Hide comments
Related