The lowly IV bag has a tremendous value for patients admitted to hospitals and are widely used to deliver medications and replenish lost fluids. IV therapy, however, can be billed at a exceptionally high rate in hospitals across the United States, despite its simplicity. A recent piece by The New York Times points out that patients can be billed "100 to 200 times the manufacturer's price [to produce them], not counting separate charges for 'IV administration.'" In some bills, the paper costs, IV therapy charges can results in bills in which patients pay nearly 1,000 times the cost of producing the bags. According to data from the United States government, the price of IV bags has fluctuated over the past decade from $1 down to 44 cents. "People are shocked when they hear that a bag of saline solution costs far less than their cup of coffee in the morning," notes Deborah Spak, a spokesperson for pharmaceutical giant Baxter International. Baxter is one of three companies that manufactures almost all IV solutions in the U.S.

The article belongs to a series on the high cost of healthcare in the United States. A recent installment was titled "In Need of a New Hip, but Priced Out of the U.S." That article drew criticism from Biomet's CEO.
AdvaMed, the industry lobby group, has repeatedly argued that medical devices themselves may not be the cause of rising healthcare costs. According to a study by AdvaMed national medical device prices and spending on them haven't increased over the past 20 years. On average, diagnostic and device prices increased at 1% annually. This compares to an average U.S. inflation rate of 2.8%.
"A significant driver of changed medical practice has been the development of new medical devices," notes the report. "In view of the conventional wisdom about the role of medical technology in driving up costs, it is surprising that the cost of medical devices during this period has risen little as a share of total national health expenditures and, since 1992, has remained essentially constant as a percent of national health expenditures."

By contrast, The New York Times' argument centered around the inflation of the costs of medical devices and pharmaceuticals as they are billed to patients. The paper also points to other ways costs can be inflated, including the lack of transparency resulting from confidential deals between distributors, group purchasing organizations (GPOs), insurance companies, Medicare, and manufacturers. Because of these secretive deals, the actual price of a medical device can be obscured to the point where few people can say what a single component actually costs. Both patients and taxpayers face inflated bottom lines with little recourse.

Before a product is sold, the real cost of a medical device disappears into the realm of confidential rebates, byzantine contracts and fees that obscure real prices. In other industries, some of these costs could be considered illegal kickbacks. Hospitals themselves don't negotiate prices. Instead, many healthcare facilities rely on giant distributors and group-purchasing organizations.


In a paper titled "Aspirin, Angioplasty, and Proton Beam Therapy: The Economics of Smarter Health Care Spending," Harvard researchers stake a different argument than AdvaMed does, arguing that medical technologies contribute towards almost half of annual cost increases.

While medical costs are clearly spiraling upwards for U.S. patients, the core reason behind that trend is hard to nail down.

4 Reasons Obamacare is Good For Medtech (#3)

4 Reasons Obamacare is Good For Medtech (#2)

With all the bad-blood regarding the medical device tax, it may be hard to imagine that there are actually aspects of the Affordable Care Act (aka Obamacare) that actually bode well for medical technology firms.

Here is a slideshow of four areas of opportunity for medtech firms under Obamacare. They are based on expert opinion from Patrick Hurd, attorney at LeClairRyan; Frederick Brown, healthcare practice managing director for Ducker Worldwide; and a report from Danielle Antalffy, research analyst at healthcare investment bank Leerink Swann.

Few materials have captured researchers' imagination as much as spider silk, which is incredibly strong and has other novel properties such as high heat conductivity. Last year, researchers announced progress in using the material in photonic chips.

To test the new technique, researchers created murine blood vessels. Using a technique known as electrospinning, researchers believe that the new technology could overcome some of the challenges associated with traditional scaffolding-based methods.

"Like a spider weaves its web we are able to draw out this continuous fiber of polymer and cells and weave a web. We could make one as thick as a mattress and the cells will be embedded right through it," notes Dr. Suwan Jayasinge, a researcher who worked on the project.

To create the blood vessels, researchers cultured a specialized broth of cardiovascular mouse cells. This broth also contained a polymer to help act as a scaffold. Through the use of a 10,000 volt electric needle, researchers pulled a fiber out of the broth.

Electrospinning works by cross-stitching fibers onto a specialized rotating cylinder. This rotating cylinder is partially submerged in an aqueous solution with nutrients. This allows the "spun" fibers to stay alive. For the study, researchers were able to produce blood vessels with three distinct layers.

Which States Will Lose the Most Jobs Due to the Medical Device Tax?

One estimate says the device tax could cost the U.S. medtech industry more than 45,000 jobs and $3.7 billion in wages. But which states will be hardest hit?

The medical device industry has complained that the 2.3% tax on medical device sales, which took effect as part of the Affordable Care Act this past January, will kill jobs. But how bad could the damage be, and which states will suffer the most?

Check out our infographic below for some estimates. 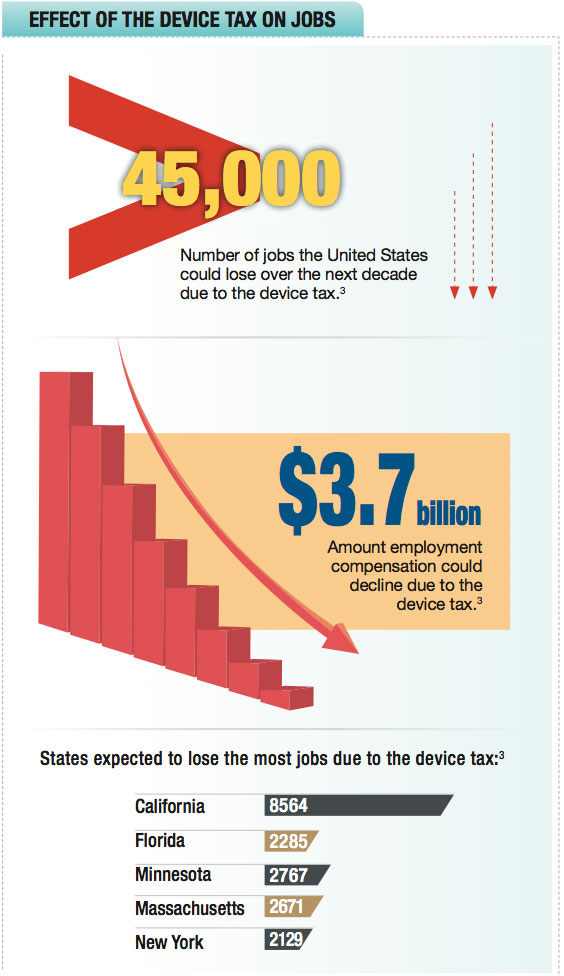 Dallas, Texas-based MicroTransponder, a medical device firm is gearing up for three clinical trials to test a new form of neurostimulation treatment for stroke and tinnitus.

Earlier this summer, MicroTransponder raised $3.4 million led by investment from Green Park & Golf Ventures, with participation from the University of Texas Horizon Fund and angel investors.

MicroTransponder’s VNS paired neurostimulation therapy has the potential to fundamentally change the standard of care for neurological disease,” said Dr. Clay Heighten, a founding partner of Green Park & Golf Ventures, in a news release. “The MicroTransponder team is adept at translating neuroscience research into clinical therapies and we look forward to their efforts to improve the lives of millions of patients living with neurological disorders.”

The money will be used to conduct three clinical trials, two aimed at stroke patients, and one at tinnitus patients, said Jordan Curnes MicroTransponder's president and COO, in an email.

The company has developed the Vivistim System designed to return upper-limb functionality for patients who have suffered a stroke, while the Serenity System is aimed toward tinnitus patients who experience the so-called constant ringing in the ears although there is no external cause for the sound.

Both the therapies are based on vagus nerve stimulation technology paired with other therapies, explained Curnes. For stroke patients, the implanted device delivers short bursts of electrical stimulation to the vagus nerve along with physical therapy for the upper limbs, that are part of standard rehabilitative therapy.

For tinnitus patients, along with the neurostimulation, patients wear a headset where they hear a specific tone that is above or below the tone they hear because of tinnitus.

The paired therapy helps to rewire the motor cortex for stroke patients and the auditory cortex for tinnitus patients, Curnes said. If this paired approach works, it will be a big benefit for patients because currently there is no standard treatment for tinnitus, he noted. In fact, the National Institute on Deafness and other Communication Disorders states that there is no cure and treatments can vary from hearing aids, to wearable sound generators and acoustic neural stimulation and anti-depression drugs.

For stroke patients, MicroTransponder's paired VNS treatment can bring back a level of upper-limb mobility, treating which over time can be very expensive. In fact it is estimated to be at an average of $150,000 per surviving stroke patient, Curnes pointed out.

The goal is to obtain CE Mark for both the devices in 2014 and then seek additional money to fund a clinical trial for a PMA submission in the U.S.

Vagus nerve stimulation is being used for multiple conditions including obesity and epilepsy.

5 CAD Models of Skeletons, Ranging in Cost from Free to $5000

Interested in CAD models of the human skeleton for your device development applications? There are a range of models. Here are five, which span a variety of price points.

2. The TF3DM website also has a free skeleton model that has basic organ anatomy. This model also offers a variety of textures.

3. This example of a free CAD model of the skeleton, available for download on www.3dmodel777.com features an impressive amount of detail.

4. This model was created to serve as a design and engineering reference. The detailed model is poseable and is can be imported in various CAD applications.

5. If accuracy and anatomical correctness are high priorities, CAD Human has developed a model that is ready for posing in Solidworks. With a price tag of $4999, it includes all separate skull bones and shows pivot joints throughout the body.

Covidien has launched a new center in Korea to facilitate technological development. The center, which will receive a total of US$21 million of funding over a three year period, will be the first such research and development facility in Korea. "It is our responsibility and honor to help advance physician capabilities and uncover opportunities for locally tailored solutions to increase access to the best patient care," explained Brian D. King, Covidien's president of emerging markets in a statement. The 6000 sq-m facility will feature a lab with 11 operating stations, an intensive care unit (ICU) lab, and a human patient simulator. In addition, the facility will have an auditorium for 112 people that features a 3-D/high-definition display technology. Covidien recently has signed memoranda of understanding with the Korean Surgical Society and the Korean Society for Thoracic & Cardiovascular Surgery and the company stresses that it will collaborate with those societies in training efforts and in new product development. The company's president of emerging markets, Brian King, has noted that South Korea represents an important component of the firm's international strategy. Last year, the company launched a $45 million R&D facility in Shanghai, China.

Wireless and mobile technologies are reshaping the world of health and wellness.

But the convergence of these techologies with micro electronics and advances in bioengineering and nanotechnology have the potential to further disrupt healthcare. For instance, researchers in Switzerland, say they have developed the world's smallest implant that has the ability to provide advance warning of a heart attack.

That device, named IronIC Systems, is one of eight new technologies charting a new course for medicine and wellness. See the infographic, created by MeMD.com below for the other seven.