7 Apps That Can Really Save Hospitals Money: Vocera Care Experience

Orthopedics startup ConforMIS has priced its initial public offering and expects to garner at least $135 million when it goes public Wednesday.

The device uses the company's proprietary iFit Image to Implant technology to develop patients implant - in other words, the implant is developed using CT scans of the patient's knees and legs.

This provides surgeons an alternative to choosing implants from a few different sizes made by other orthopedics companies like Zimmer and Stryker. An off-the-shelf implant means that patients may have sizing and fit issues that may impede quick recovery.

An abstract presented at the 2015 ICJR Arthroplasty Conference that retrospectively studied patients who were treated with an iTotal customized implant from ConforMIS and traditional TKR found that patients undergoing iTotal had much lower blood transfusion rates among other benefits.

Perhaps most significantly, patients who underwent the iTotal procedure had faster recovery times and patient satisfaction was also much higher. From the hospital perspective, the study found that there were lower adverse events for procedures related to the ConforMIS knee and costs borne by the hospital were not higher than those incurred if a TKR were performed.

Materials That Don’t Crack Under Disinfection

The focus on preventing hospital-acquired infections has led to another problem: surfaces that are wearing out from repeated cleaning. One company has created a new plastic material that can stand up to harsh disinfectants. 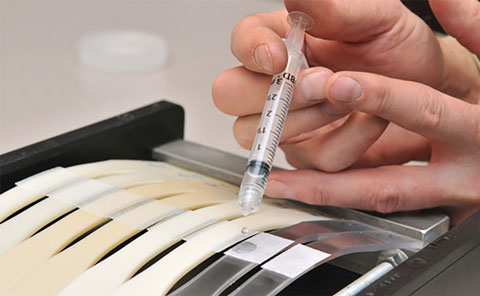 RTP tested materials for chemical resistance by putting tensile bars of the materials under strain, applying chemicals every 24 hours, and allowing the bars to dry and oxidize over 96 hours.

Hospital-acquired infections (HAIs) are a big problem for healthcare, with a CDC survey finding that about 1 in 25 hospital patients get a HAI. Clinics and hospitals have reacted to those fear-inducing statistics with thorough cleaning, strong disinfectants, and routine sterilization practices.

That means that medical devices are getting cleaned more frequently, especially in cases with older, immune-deficient patients, says Josh Blackmore, global healthcare manager at RTP Company, speaking with MD+DI at the MD&M East Conference in New York City on June 10. Unfortunately, Blackmore says, the chemicals in cleaning solutions are tough on molded-in plastic parts, causing cracking, then catastrophic breaks in the material.

This is a problem for all molded plastics. RTP clients from locales as far apart as Germany, Southeast Asia, and Pennsylvania all separately noted they wanted a plastic that could withstand repeated exposure to harsh chemicals.

So, approximately four years ago, RTP began working on a solution to the disinfectant problem, says Margaret Cox, senior marketing communications specialist at RTP. Cox says that RTP screened dozens of plastics from major suppliers before beginning to craft new alloys. The breakthrough came about two years ago, she says. Now, the company is gearing up to launch the RTP 2000 HC series, a new polyester alloy with higher resistance to hospital disinfectants.

There is "nothing like it on the market," says Blackmore. Beyond chemical resistance, the material has the same shrink as Polycarbonate/Acrylonitrile Butadiene Styrene (PC/ABS), and offers a visually-appealing finish, he says. Having the same shrinkage as PC/ABS, the industry standard, is important, because manufacturers will not need to change their molds in order to use the new material.

Blackmore also points out that though Polycarbonate/Polybutylene Terephthalate (PC/PBT) is often mentioned when it comes to chemical resistance, PC/PBT has a different shrink than PC/ABS, so is not easily substituted into the same molds.

The new material has been tested against numerous chemical cleaners with ingredients including alcohols, aldehydes, alkyl amines, chlorine-releasing compounds, peroxides, and quaternary compounds. RTP devised a test that mimics the stresses and chemical exposure that the material might undergo with repeated cleaning. Tensile bars of different materials, including RTP 2000, were strained (bent) to 1.0%, then a gauze patch in the center of each bar was soaked with different types of chemical every 24 hours. In between applications, the bar was allowed to dry out and oxidize. This test was triplicated and conducted for 96 hours.

According to data provided by RTP, the industry standard PC/ABS material failed tensile strength and elongation tests for all but two of the 11 common cleaners used. RTP 2000, meanwhile, passed the test with all 11 cleaners. Obviously, Blackmore won't reveal what makes the new alloy so special, but admits that unique additives were used to help improve the material's properties.

The RTP 2000 material is able to stand up to repeated hard surface disinfection and is intended for use in what Blackmore calls "non-critical" medical settings—that is, products that don't come in contact with bodily fluids. These are products like hand-held diagnostics, drug/infusion pumps, enteral feeding pumps, and mobile diagnostics, like x-ray, ultrasound, and MRI equipment.

The RTP 2000 HC series is available in flame retardant and non-flame retardant versions, as well as additional options like UV resistance, electromagnetic shielding, and color choice, according to a release about the new material.

7 Apps That Can Really Save Hospitals Money: HealthySteps

7 Apps That Can Really Save Hospitals Money: ReadySetGo

7 Apps That Can Really Save Hospitals Money

By helping to reduce readmissions, these mobile apps could keep money in providers' pockets.

Sherree Geyer is a freelance contributor to MD+DI. Reach her at sherreeg@cox.net.

[image courtesy of CARE AT HAND]