Articles from 2010 In February

Steris is unsure what to make of the agency communication. A company representative said that Steris had called FDA, but had not yet received an answer, according to MedCity News.

FDA has previously issued a warning letter to Steris about the sterile processing system. You can read more about it in February's Washington Wrap-Up. 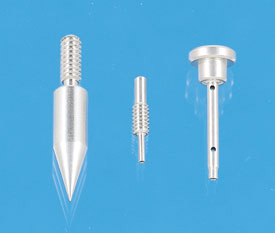 IncisionTech (Staunton, VA) has completed its move to a new facility in Cranston, RI. With a staff of more than 110 employees, the production facility will house the company's needle technologies manufacturing operations. The site replaces the old Lincoln, RI, Popper building, expanding the company's needle manufacturing space by 60% and doubling its capacity. In conjunction with the move, the company has also introduced its Adrenaline rapid prototyping response service. IncisionTech's new facility includes a dedicated machining center with 11 state-of-the-art Swiss screw machines. Its machining capabilities include tolerances to 10 µm, modular tooling configurations, thread whirling, hob milling, helical and cylindrical turning, and live tooling. It can process brass, stainless steel, titanium, PEEK, ceramic, and other materials.

The research study will involve 200 high-risk Mayo Clinic patients over age 60 who receive care in Rochester, MN. Study participants will measure their vital signs such as blood pressure, pulse, and weight, and respond to questions specific to their diseases on a daily basis, with all data reviewed by the clinical care team working with their primary care provider. Intel's technology, which enables videoconferencing, allows the care team to assess the patient for signs and symptoms that would suggest early medical intervention.

Extensive research on various nanomaterials during the past several years has revealed that many materials behave differently on the nanoscale than on the "macroscale." Researchers from Johns Hopkins University (Baltimore, MD) are the latest to make headway in this area, finding that activity on the atomic level can impact a material's mechanical properties when a certain stress is applied. This discovery could have implications for the development of microdevices. 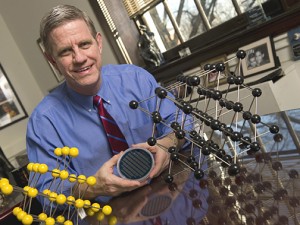 Lead author Kevin Hemker, seated between models representing how atoms are packed within an individual grain in a material, holds a silicon wafer onto which nanocrystalline aluminum thin film specimens have been deposited. Photo: Will Kirk/Homewoodphoto.jhu.edu

A grain boundary is the interface between two 3-D crystallite clusters of atoms (grains) with differing geometries. Because they were assumed to be static, grain boundaries have always been credited with helping to resist material deformation and contributing to a material's strength. During experiments on nanocrystalline aluminum thin films, however, the researchers concluded that this long-held science belief wasn't entirely true in the case of nanomaterials. Upon applying force in the form of shear stress, the scientists observed growth of the grains, which they say can only be caused by boundary migration. Consequently, the researchers have deduced that some nanomaterials could offer better plasticity, less brittleness, higher reliability, and longer life than originally thought. They could also provide less strength, however. This breakthrough in nanomaterials research could impact the development of microdevices, MEMS-based products, and integrated circuits from some thin films and other nanomaterials. More information on this research can be found in the researchers' paper in the journal Science.

A team of scientists at JILA, a joint institute of University of Colorado at Boulder (CU) and the National Institute of Standards and Technology (Gaithersburg, MD), are making progress in the development of an ultrafast tabletop x-ray laser. Once realized, the laser could greatly enhance image resolution and eventually allow for superior diagnostic tools. "Our goal is to create a laser beam that contains a broad range of x-ray wavelengths all at once that can be focused both in time and space," says CU physics professor Margaret Murnane. "If we have this source of coherent light that spans a huge region of the electromagnetic spectrum, we would be able to make the highest-resolution light-based tabletop microscope in existence that could capture images in 3-D and tell us exactly what we are looking at. We're very close." By employing a femtosecond laser and combining hundreds or thousands of visible photons, the group can generate coherent laser-like x-ray beams, which requires less power than conventional x-ray lasers. Likening their technology to a coherent version of the x-ray tube, the researchers "pluck part of the quantum wave function of an electron from an atom using a very intense laser pulse. The electron is then accelerated and slammed back into the ion, releasing its energy as an x-ray photon. Since the laser field controls the motion of the electron, the x-rays emitted can retain the coherence properties of a laser," according to the press release. If they can extend these beams into the hard x-ray region of the electromagnetic spectrum, the scientists believe that a host of opportunities for medical imaging will be presented. Offering dramatically enhanced resolution quality, which the group predicts could be 1000x better than that of current technologies, would potentially open the door to better patient care. For example, higher resolution could enable imaging of tiny tumors and abnormalities that are too small to be detected using current systems, according to the team.

Until recently, 60% of Zarlink Semiconductor's sales were devoted to communication chips. But no longer. According to a Reuters Canada article, Zarlink (Ottawa, ON, Canada) is moving further into the medical device market, investing in ultra-low-power, high-frequency radio chips. Medical devices that already incorporate the company's transmitter chips include Given Imaging's Pillcam and St. Jude Medical's pacemakers. In addition, Zarlink and its customers are developing drug pump systems for the treatment of diabetes and deep brain stimulation devices for treating a range of illnesses, such as Parkinson's disease, tremors, depression, and epilepsy. The firm is reportedly spending about 30% of its R&D budget on chips for medical devices, a market that Zarlink CEO Kirk Mandy expects to grow as the population ages. "We have a revenue run rate in the $30 plus million a year range today," he told Reuters. "I can see that business growing to around $100 million over the next three, four years." The market for low-power radios in the medical industry is growing, Mandy adds, and will become a multibillion market over the next five years. Read more about Zarlink and its work, including its contribution to an in-body microgenerator able to harvest energy from a human heartbeat to power implants.

George Lewis, creator of the ultrasound, is preparing for the product's first clinical trial. The study will observe whether the device can reduce joint pain in patients with osteoarthritis of the knee. Its success will be based upon both reduced joint pain and increased mobility in patients.

Lewis is also collaborating with an MBA student from Cornell, Bryant Guffey, to form ZetrOZ Inc. in efforts to bring the device to commercialization. In the future, Lewis and Guffey hope to use the device for muscle healing and drug delivery. Another possibility is for the treatment of glioblastoma, a form of brain cancer. In this case, the ultrasound would be used to disperse the drug to kill any remaining cancer following tumor removal.

In a statement, industry group AdvaMed says, "While the basic structure of the 510(k) process works very well and has evolved over time to better meet the needs of American patients, we recognize that there is no process that cannot be improved."

According to Reuters, FDA will accept public comments for the next month before making its task force's recommendations public in June. 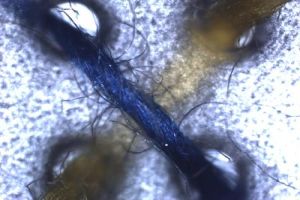 Household sewing supplies could be the key to the development of a novel diagnostic device. As explained in a recent issue of the journal Applied Materials & Interfaces, scientists from Monash University (Victoria, Australia) employed conventional cotton thread and sewing needles to fabricate low-cost, lab-on-a-chip devices. Electronic threads have been the subject of various studies; however, the researchers believe that this is the first time that cotton threads have been used to engineer microfluidic products. To do so, the team sewed cotton thread onto another material, such as polymer films or paper, thereby creating 3-D passageways. Acting as a microfluidic channel, the thread allows for the transport of liquid via capillary wicking and without the need for an external pump. It also enables the development of channels that are more complicated than those in lateral flow systems, according to the researchers. "Threads allow complex continuous 3-D microfluidic channels to be built without the need of patterned barriers to define the liquid wicking passageways," according to the paper. "High-density thread circuitries can be built in a relatively small space that is suitable for miniaturization. Fabrication of such 3-D microfluidic structures with threads requires only some basic tools such as a sewing needle or a household sewing machine, and is therefore less reliant on sophisticated equipment required for patterned paper devices."

Serica will remain in Massachusetts, where it was founded in 1998 based on technology originating at Tufts University near Boston. Serica had raised less than $24 million from individual investors and venture capitalists Prism VenturWorks, Morningside Technology Ventures and Ivy Capital Partners.