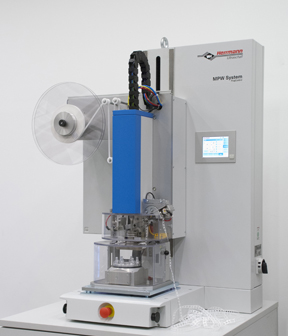 An ultrasonic punching and weld-sealing machine has been designed to save medical device manufacturers material and steps in the production of plastic components with integrated filter membranes. Supplied as a manual workstation or integrated into an automation line, the HiQ MPW modular system can punch and weld at the same time. In a single step, the unit transports the membrane by conveyor, punches the membrane contour, and welds the membrane onto the part in a weld cycle time of less than 2 seconds. Downstream optical quality control is not needed because the system has its own vacuum monitor to check whether the membrane is correctly punched and positioned. The machine control features gentle conveyor transport with a splice check to minimize other sources of error and thus production downtime.

Indian Stent Makers Give Boston Sci, Medtronic, and Abbott a Run for Their Money

A company provides filter vents made with proprietary Tetratex expanded-PTFE membranes for a variety of medical device applications, such as devices requiring acoustic and protective vents, drainage bags, IV-administration sets, ostomy bags, urine bags, and device packaging. The vents are hydrophobic, toxicity-tested to USP Class VI standards, clean and nonshedding, chemically inert, and thermally stable. They feature high particulate and bacterial removal rates and high rates of airflow, and are designed to minimize extractables. Oleophobic and acoustically transparent materials are optionally available. Equipped with design and filtration-material expertise, the manufacturer offers custom systems that are easily integrated into the customer’s device or application.

Silver conductive ink for pad-printing high-definition fine-line traces in hard-to-print areas of electronic medical devices is offered to give design engineers flexibility in creating circuits. AG-1074 ink is designed to print well in recessed areas of hard-plastic device substrates and on raised surfaces, by contrast with screen printing and other conventional printing processes that cannot access contoured surfaces. Solvents can be adjusted for compatibility with specific substrates or medical-grade silicone pads, and the ink enables design engineers to incorporate electronic circuit traces into molded parts more easily.

The 2013 Consumer Electronics Show wraps up today, but this year showed no shortage of new products and innovations in medical technology – especially in the areas of mobile/digital health and safety. If there's one trend to take from the news coming from this year's CES it's that healthcare is expanding out of the hospitals and doctor's offices and into the rest of our lives.

In addition to a Digital Health Summit focused on the latest trends in digital technology affecting healthcare, CES 2013 saw a good number of new medical device products being unveiled. Some are aiming to carve out a niche in already crowded markets (i.e. wearable sensors and monitors) while others are looking to take on new challenges.
Here's a roundup of some of the products that could be on everyone's mind (and our bodies) in 2013:

- Chris Wiltz is the Associate Editor of MD+DI

Medical Device Manufacturers of the Year, 2012

Medtech Innovation Doesn’t Have to Be Expensive

Innovation has more to do with recognizing “what the real need is” rather than deploying new sets of technologies. “Even when you are designing with your existing technology you can actually subtly shift the way you design in order to address the need better,” he says.

Most device companies do traditional market research, Chang says. For instance, ”they do time-and-motion studies, talk to key opinion leaders to see what their thoughts are,” he explains. But there are a lot of different ways you can get at new ideas that don’t involve those traditional methods. “Key opinion leaders (KOLs) aren’t always the best people to talk with because generally they are the most practiced and the most capable; the issues that your average practitioner has, they don’t necessarily have,” Chang explains. “You are not actually solving the needs of the population you are going to sell to if you are only deriving your product specs from the KOLs.”

Device companies also should make sure they thoroughly consider the “human need” of the end user, Chang advises. “The way most medical device companies go about determining specs is actually pretty rigid and defined by regulatory constraints. Some device companies don’t [allow] a lot of time to focus on the human need, which is not always captured in the specs.”

Chang acknowledges the substantial differences in product development in the medical device space and the broader technology industry. “The consumer space, which includes products like the iPhone, is all about making the consumer happy. In healthcare, the most important thing might be saving the patient’s life,” he says. “That being said, when you design a product well, it makes it easier for the physician not to make a mistake, which is a big deal.”

Another barrier to innovation in the medical device environment is the lure of the consumer space for startups. “Because there are so many hurdles: regulatory, the difficulties of running trials, and so forth, it really raises the hurdles for entrepreneurs,” Chang says. “If I am an entrepreneur and I want to do something really creative, I could move over to the consumer space, where there are low hurdles and the chances for success are high, and I’ll know I’ll spend less time spinning through all of the challenges of patent and regulatory kind of stuff,”

Chang muses that a consortium of people might be able to get together to come up with a set of tools that makes it as easy to innovate in the healthcare space as it is in the consumer space. “How do we get the broader ecosystem to lower those barriers so it is equally enticing to save a life as it is to make a cool iPhone app?” Chang asks. “Healthcare is where a lot of money is going to be spent in the next ten years and I think it is not a matter of if but when someone figures out how to develop those platforms. You look at companies like Qualcomm Life, Alere Connect, those are some of the people who are thinking about building platforms with which you can at least do digital innovation in healthcare,” he says. “I think we have to figure how we can extend that notion much more broadly across the entire healthcare space including devices, services, protocols, and things like that so the risk profile is a lot lower.”

Join Heather Thompson, Mary Logan, and Ken Maddock in a frank and illuminating discussion of the key device-related problems that hospitals are facing today. What can device makers do to alleviate the new burdens hospitals face, such as cybersecurity, alarm management, and the bandwidth issues created by BYOD (bring your own device).

Topics: Heather, Mary, and Ken discuss the top device-related challenges for hospitals in 2013, as reported in a study conducted by the AAMI.

Stryker, a medical device manufacturer based in Kalamazoo, Michigan, announced that it will place a higher emphasis on markets outside the United States. At the JP Morgan Healthcare Conference, Stryker CEO and president Kevin Logo detailed the new plans for the company. According to information released at the San Francisco conference, Stryker will overhaul its European and emerging-markets business. It has made several significant changes in its management and structure oversees. According to Lobos, it could take several quarters for changes to be reflected in the company's finances. However, he stated that the European market was a "key plank" in Stryker's global market initiative. Emerging markets currently represent six percent of Stryker's sales. In emerging markets where the company has an existing footprint, Stryker has seen 20 percent growth. However, the company feels that there are many existing emerging-markets where a larger footprint would enhance sales. In ending remarks, Lobo stated, "Globalization's an enormous opportunity for Stryker, we clearly have room to grow outside the U.S." He continued, "The U.S. is still representative of 65% of our total sales. That is a ratio that hasn't changed in about 10 years." References http://www.stryker.com/en-us/corporate/pressnews/index.htm

It is fitting, in more ways than one, to compare the firm’s technology to GPS systems. In addition to helping diabetics navigate changes in their blood glucose levels, the company’s Gen 4 Platinum also reflects the trend of consumerization in the medical device space. The Gen 4 Platinum itself looks more like an iPod than a GPS system. The company recently announced a partnership with Tandem Diabetes Care, which also has a product, the t:slim insulin pump, that bears a resemblance to an Apple product.

Much of Gregg’s talk focused on the Gen 4, which debuted in October 2012 after having been approved by FDA in six months. “That is unheard of in this regulatory environment,” he said.

The device is 20% more accurate overall than its predecessor, the 7 Plus (for a look inside that device, see: “Inside the Dexcom Seven Plus Continuous Glucose Monitoring System”), which will help diabetics better navigate the “delicate balance between hypoglycemia and hyperglycemia,” Gregg explained. “Hyperglycemia contributes to the microvascular complications associated with diabetes: cardiovascular disease, increase in blindness, kidney failure, and nerve degeneration,” he said. “On an acute basis, hypoglycemia is even more dangerous [leading to] cognitive impairment, loss of consciousness, and potential death.”

In general, CGM can also help reduce the costs of treating diabetes, which, in the United States, exceeds $170 billion annually. “On average, a hospitalization for hypoglycemia costs $17,000,” adding that “CGM can reduce hypoglycemia by 50%.”

At present, only a handful of firms have CGM products on the market. In the United States, Medtronic and DexCom are the only players. Dexcom has working to expand its operations outside of the United States. “Today, 90% of our revenue is derived from the U.S. market,” Gregg acknowledged. “We now operate in 22 countries. As we expand beyond our shores, we will expand that to an additional 11 countries.”

The company plans on introducing a variety of new products in 2013 and 2014. “In late 2014 to 2015, we’ll introduce smartphone technology that we are currently working on,” Gregg said.

“Mobile health is at our doorstep,” he said. “And we are leading activities with FDA looking at Class III medical devices, the risk and mitigations of those risks in order to achieve wireless capability.”

The company is also involved in the artificial pancreas project, which integrates a continuous glucose sensor and insulin pump, and an algorithm, which serves as a brain for the device.