Why NuVasive's Pulse Delay Is Actually a Good Thing 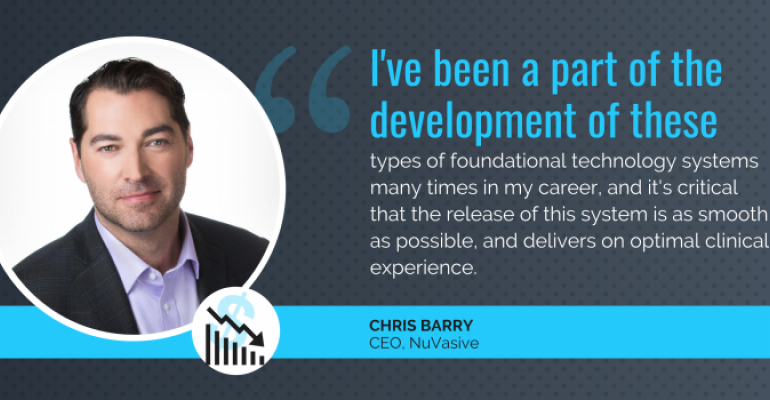 NuVasive's stock price dropped after the company announced that development of its Pulse surgical automation platform will continue through 2020.
The company has pushed back the commercial launch of its robotics navigation feature of Pulse, citing the need to further refine the technology.

Spine surgeons will have to wait a little longer than previously expected to get their hands on NuVasive's Pulse surgical automation platform, which FDA cleared last July. The San Diego, CA-based company has decided to spend most of 2020 further refining the platform based on beta testing insights. Commercial launch is now expected in 2021.

Pulse is single platform designed to combine neuromonitoring, surgical planning, rod bending, radiation reduction, imaging, and navigation in order to address many of the challenges spine surgeons face. The company is also developing a robotics application for Pulse in parallel.

A 6% stock price drop following the announcement suggests NuVasive shareholders were disappointed with the delay, despite the company's strong fourth-quarter earnings that were reported at the same time. But as we've seen from other orthopedics companies, it's often better to treat projects like this as a marathon rather than a sprint.

Take Stryker's Mako Total Knee System, for instance. FDA approved the Triathlon Total Knee System for the Mako robot in August 2015, but the Kalamazoo, MI-based company made the market wait more than a year for the full commercial launch. Stryker wanted to release the product at a measured pace in an effort to maximize its chance of success, and that approach has certainly paid off for the company. Warsaw, IN-based Zimmer Biomet also took a conservative approach with the launch of its Rosa Knee System, and that too has proven wise.

NuVasive has been working through Pulse beta evaluations for the last several quarters, CEO Chris Barry said during the company's fourth-quarter earnings call.

"Through insights learned during the verification and validation testing process, we've made the decision to continue to iterate on the platform's development. We expect this work will continue throughout the year," Barry said. "I've been a part of the development of these types of foundational technology systems many times in my career, and it's critical that the release of the system is as smooth as possible, and delivers on optimal clinical experience."

Barry assured investors that the Pulse platform has been well received by surgeons and hospital administrators so far. But to fully deliver on the promised value proposition of the system, NuVasive has to nail it right out of the gate.

"Let's make absolutely sure. Let's extend the testing as long as we need to. Let's not let the sense of urgency overwhelm us," Barry said. "...We're making sure that we launch the most stable, safe, and effective product into the market, and [to ensure] that we do so, we're just extending this testing for, really, throughout the year 2020."