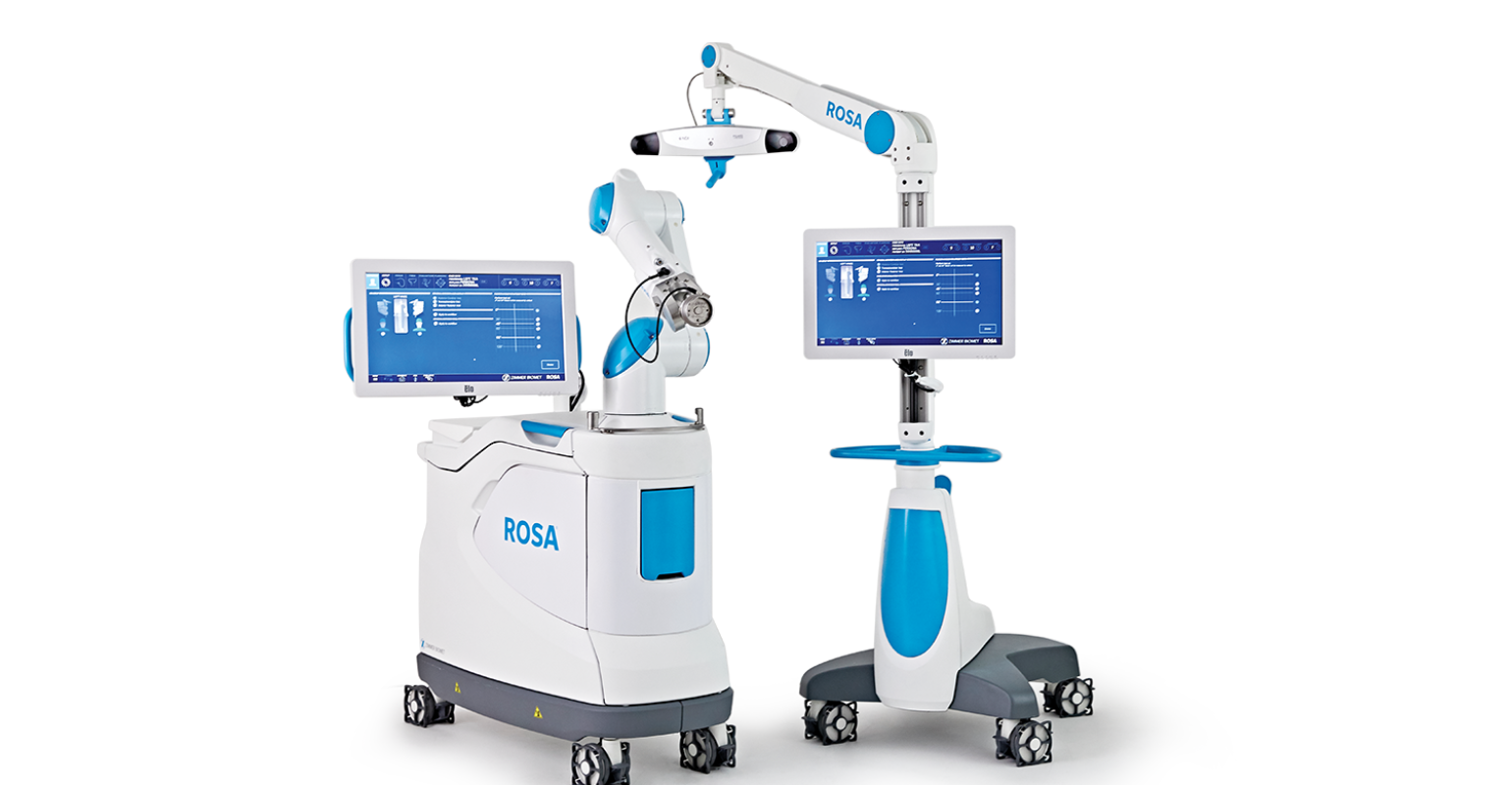 Needham & Co.'s Mike Matson published an analysis Wednesday of the potential impact of the anticipated full launch of Zimmer Biomet's Rosa Knee robotic system.
An industry analyst expects Zimmer Biomet's Rosa Knee robotic system to represent a formidable competitor to Stryker's Mako Knee after the Rosa Knee's full launch later this year. However, both Mako and Rosa have their strengths and weaknesses, and neither is clearly superior, the analyst said.

Surgical robotics is hotter than ever this year, particularly on the orthopedics side, and Zimmer Biomet is about to crank up the heat even more. The Warsaw, IN-based is expected to initiate a full launch of its Rosa Knee robotics system in the back half of the year.

FDA cleared the system for use in robotically-assisted total knee replacement procedures in January, but Zimmer Biomet took a disciplined approach to commercialization.

"We're going to do a limited launch out of the gate," Zimmer Biomet CEO Bryan Hanson said during a Feb. 1 earnings call. "We want to be very disciplined in our approach to launching a new robotic system to make sure that we do it right. We have the right education. We have the right service levels. And we will do that limited launch for, let's call it six months. Post that limited launch is when we move into full launch. And that's when the organization gets unleashed and we utilize that technology in that full launch status."

Needham & Co.'s Mike Matson published an analysis Wednesday of the potential impact of the anticipated full launch. In particular, Matson looked at how Rosa might impact Stryker's Mako robot, which garnered impressive revenue during the fourth quarter of 2018.

Interestingly, Stryker also took a conservative approach to its Mako launch. The Kalamazoo, MI-based company made the market wait more than a year after FDA approval for the full commercial launch of its Mako total knee product. In Stryker's case, the product proved to be well worth the wait.

Zimmer Biomet has lost knee market share on a year-over-year basis in nearly every quarter since the Zimmer-Biomet merger, according to Matson. The full launch of the Rosa Knee is likely to change that story though. The analyst also noted that the company's share loss can be attributed to supply issues and other product gaps, not just the lack of a robotics offering. He also acknowledged that the share loss did slow last year as Zimmer Biomet began to address its supply issues.

"We expect Rosa to represent a formidable competitor to Mako and we expect Rosa to stop, and eventually begin to reverse [Zimmer Biomet's] recent knee market share loss," Matson said in his report.

The analyst projects that the Rosa knee system could add roughly 0.9% to Zimmer Biomet's revenue growth in its first 12 months of commercialization. He also hypothesized that Rosa could cause Stryker's Mako placements to slow somewhat.

"We expect Zimmer Biomet's new knee implant products and its Rosa knee and spine/brain robotic launches, to drive faster revenue growth in 2H19 and 2020 and we reiterate our 'strong buy' rating for the stock."

Breaking it down by calendar year, the analyst estimates that Zimmer Biomet can place 40, 96, and 144 Rosa knee systems in 2019, 2020, and 2021, respectively. The number of 2019 placements would naturally be lower because the system will only be fully available for about six months of the current year. He also estimates there will be about 900 Rosa knee procedures performed this year compared to about 6,000 procedures in 2020 and about 17,000 procedures in 2021.

Stryker's Mako is believed to be responsible for a portion of Zimmer Biomet's knee market share loss, and Stryker has indicated that 40% or more of its Mako placements have been with competitive surgeons, Matson said. Now that Zimmer Biomet is selling Rosa, he said it should significantly reduce customer loss to Stryker.

"And over the long run, we believe that Rosa should begin to drive market share gains for [Zimmer Biomet] as it also sees a portion of its placements with competitive surgeons primarily from [Johnson & Johnson] and [Smith & Nephew] since Stryker offers Mako," he said.

Based on his takeaways from The American Academy of Orthopedic Surgeons (AAOS) meeting in March, Matson said both Mako and Rosa have their strengths and weaknesses and "neither is clearly superior."

"Mako has a bone saw attached to its robotic arm and [Stryker] seems to be focusing most on haptics as a key point of differentiation and the main driver of the improved outcomes it is seeing with Mako," Matson reported. "In contrast, Rosa has a cutting guide attached to its robotic arm and [Zimmer Biomet] points out that Mako’s haptics can become annoying to surgeons by limiting their control and ability to fully complete bone cuts."

Mako requires a CT scan and Stryker is likely to claim this makes it more accurate, Matson noted. In contrast, he said, Rosa uses X-rays or even works on an image-free basis and Zimmer Biomet is likely to claim this saves money and time. The company also claims that surgeons can reach time-neutrality with Rosa within 10 cases and that it only requires 17 registration points versus 92 for Stryker's Mako.

"One of our competitors presented just recently here and talked about the continued strength in robotics," Hanson said during the company's February earnings call. "That's perfect. I love to hear it because we're just about to launch our robotic platform in a market that is surging. And when you think about it and the under-penetration of robotics in general, when you think about the number of surgeons that are doing procedures today with our implants, there's a very good opportunity for us and we couldn't be more excited about the fact that robotics is getting good traction."

Zimmer Biomet's partnership with Apple could also give the company a competitive edge. Zimmer Biomet is working with Apple to study the mymobility app's impact on patient outcomes and overall costs of hip and knee replacement surgeries.