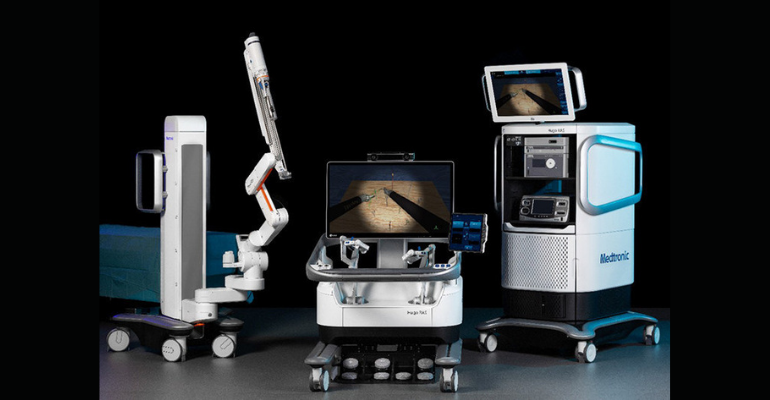 Pros and cons of the Medtronic Hugo robotic-assisted surgery system, from the POV of a leading robotic surgeon, with comparisons to Intuitive Surgical's da Vinci.

Most of the existing 20-some robotic surgery systems on the market today will either be acquired by a large medical device company, or fail.

The competitive landscape of the robotic surgery market has been heating up for a years now, but when the dust settles, the soft-tissue robotics field will end up with between three to five major surgical robotics systems, according to Alex Mottrie, MD, a pioneer in the field of robotic surgery. It's becoming increasingly clear that the top of the robotic surgery food chain will be Intuitive Surgical and Medtronic.

Mottrie, who has performed more than 4,000 robotic surgery procedures since 2001 and was the first surgeon to perform a prostatectomy using the Medtronic Hugo Robotic Assisted Surgery System (Hugo RAS) earlier this year, shared some candid insights on the current robotic surgery landscape during a call hosted by medtech analysts at BTIG.

From a 30,000 foot view, the key differentiator between Medtronic's Hugo and Intuitive Surgical's da Vinci platform seems to come down to procedure type, according to analyst takeaways from the call. Currently, both systems are best suited for urological and gynecological procedures, however Hugo's four independent arms could eventually increase interest in using the system for general surgery and colorectal surgery, as the design allows for better abdominal access, according to Mottrie.

"Mottrie noted that [da Vinci] is best suited for urological and gynecological surgery," wrote Ryan Zimmerman, in his report of the call. "Mottrie does believe multi-quadrant surgery is harder with [da Vinci] and part of why it has taken longer to enter the abdominal market." 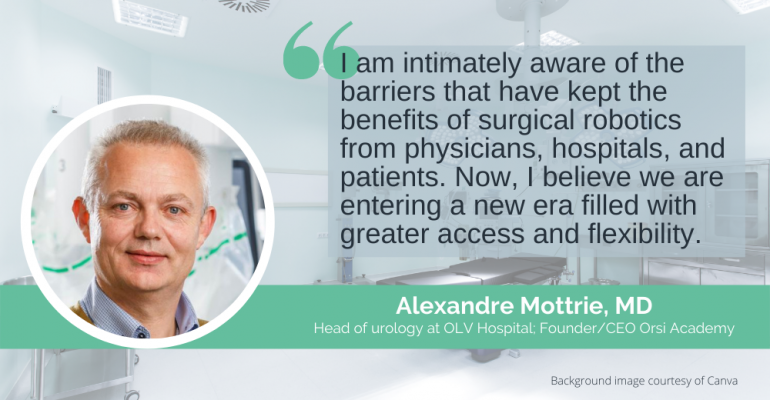 Mottrie founded the Orsi Academy, a multidisciplinary school in Belgium for surgeons on robotic and minimally invasive surgery and consults for hospital systems on robotic surgery. So, it should be noted that the Intuitive Surgical SP robot is not yet available in Europe, but Mottrie said he is actively awaiting its arrival. The da Vinci SP just recently scored regulatory clearance from Japan’s Ministry of Health, Labour and Welfare for use in general surgeries, thoracic surgeries (excluding cardiac procedures and intercostal approaches), urologic surgeries, gynecological surgeries, and trans-oral head and neck surgeries. As for Medtronic, Mottrie says the Dublin, Ireland-based company is primarily focused on the development of Hugo in Europe before it turns its attention to the U.S. market. Today, about a third of his cases are completed using the Hugo system.

Hugo has four independent arms, which Mottrie says allows for greater access to the abdomen in comparison to the da Vinci system. While these arms do allow for improved positioning though, the surgeon says they can be more complex to use. However, he also said that when surgeons are proficiently trained on the system, the increased complexity is less of an issue. There were also some early software issues associated with Hugo's arms, but it's not uncommon to experience a few bugs early on, he added.

"We came away from the call more encouraged about [Medtronic's] Hugo RAS as compared to our previous expectations," Zimmerman wrote. "Feedback prior to our call has been mixed from other physicians, so it was encouraging to hear some positives on Hugo."

Mottrie also pointed out that Medtronic has improved the system as of late, working through some software bugs and microchip issues, and is increasing his usage relative to Intuitive Surgical's da Vinci, Zimmerman reported. Mottrie completes between 350 cases and 400 cases a year (mostly prostate surgeries) as the head of the urology department at the largest hospital in Belgium.

Aside from the increased learning curve associated with its arms, the biggest gripe about Medtronic's Hugo robot seems to be the 3D goggles that are used for the system's large 3D display screen (although the display screen itself is seen as a big plus as it provides good vision throughout the procedure).

Mottrie said some surgeons complain that the 3D goggles are hard to get used to, especially for surgeons with neck problems. As for himself though, he has not had any trouble with the goggles, even after using them to perform three procedures in a single day. The ergonomics of the 3D viewing screen have also been a complaint, according to Mottrie.

Compared to the da Vinci system, the Hugo system also lacks certain instrumentation currently, such as a stapler, vessel sealer, or other energy-based devices. Mottrie said he expects Medtronic to release more instrumentation for the system next year.

The best thing about Medtronic's Hugo robot, especially compared to Intuitive's da Vinci platform, seems to be the open console. According to Mottrie, the open consule design allows for direct contact with the assisting staff and for more oversight of the patient during surgery.

The closed-console design of Intuitive's da Vinci platform has long been considered one of the major barriers to adoption in the field of robotic surgery.

Which robot is the better bargain?

Mottrie said Hugo is 20% to 25% cheaper than the da Vinci system in terms of I&A at his respective facility even as Intuitive Surgical has extended the useful life of its instruments. Mottrie also said Medtronic's robotic system is still meaningfully less expensive than Intuitive's da Vinci.

Surgeon training will be what ultimately makes or breaks the robotic surgery field. Zimmerman reported that Mottrie emphasized that training surgeons to proficiency on robotic systems is key, not only because improved training results in better patient outcomes, but because improved training reduces physician drop-out rates. Physicians can be trained to use multiple robotic surgery platforms, he said, as long as they are proficient in all of them.

The basic skills surgeons need to be trained on a robotic surgery platform are dissection, knot tying, coagulation management, and specific procedure training.

"Similarly, it is likely larger volume centers which will have access to multiple robotic systems," Zimmerman wrote. "The choice of which system to use will be driven by the indication, further emphasizing the need for physicians to be trained on multiple devices."

What's next for robotic surgery?

According to Zimmerman's report based on BTIG's call with Mottrie, the robotic surgery field is expected to advance by leaps and bounds over the next decade. More progress is expected in the next 10 years than we've seen in the entire history of surgical robotics, and that is primarily because of software enhancements.

Future upgrades to Medtronic's Hugo system will probably focus on software, image-guided surgery, and artificial intelligence, Mottrie said. A new generation da Vinci system could also be on the market before too long, which would likely be a catalyst not only for Intuitive, but for the entire field. The emergence of flexible robotics is also expected to drive innovation in the field.