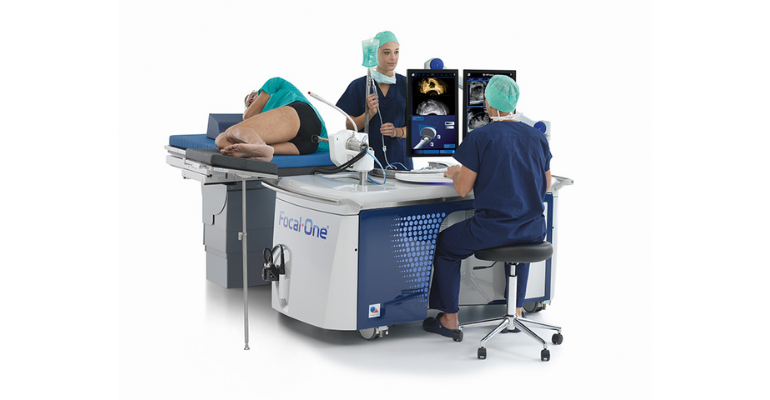 EDAP survived medtech's notorious ‘death valley,’ so what will it take to move the needle in the U.S. market for high intensity focused ultrasound (HIFU)?

In an article published by MD+DI in August 2019, Marc Oczachowski wrote that the grueling path from FDA clearance or approval to reimbursement is like a treacherous walk through Death Valley, and that many companies don’t make it through. Oczachowski is the chairman and CEO of EDAP TMS, a French medtech company that makes a robotic high intensity focused ultrasound (HIFU) system for prostate cancer treatment.

HIFU has changed the game in prostate cancer, leaving the prostate intact and only destroying the cancer, making it possible for men to retain their sex lives and urinary continence, which is often a casualty of surgery and radiation.

Having successfully crossed the notorious "Death Valley" of medtech to get FDA clearance for HIFU and reimbursement for EDAP's minimally invasive procedure, Oczachowski shared some valuable lessons learned from what was ultimately a 14-year journey, starting with the FDA pre-market approval process and later shifting to the more expedient 510(k) clearance pathway, and then "getting through the Death Valley gauntlet to finally win the American Medical Association's approval of a new Category I CPT code for treating prostate cancer, and reimbursement from insurers.

But what happens after that treacherous journey?

EDAP's commercial efforts have included gathering patient testimony about their positive experience with HIFU, building clinical evidence that demonstrates the long-term benefits of HIFU for prostate cancer, and getting urologists around the world to advocate for HIFU as a significant advancement in the treatment of localized prostate cancer.

Yet, EDAP’s share price has lingered primarily in the single digits.

Recently, the company brought in Ryan Rhodes to head up its U.S. subsidiary, EDAP Technomed, to help the business reach its full potential in the U.S. market. Rhodes is a medtech veteran and spent 14 years at Intuitive Surgical, where he played a leading role in the global clinical expansion of robotic surgery across multiple specialties, including urology. 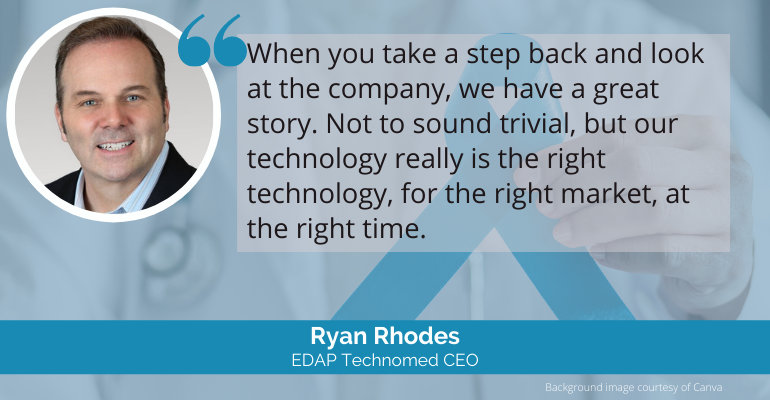 As HIFU has evolved in recent years, EDAP has treated more than 60,000 patients worldwide and has developed a second-generation platform, Focal One.

In terms of market size and opportunity, Rhodes told MD+DI there are about 250,000 newly diagnosed prostate cancer patients in the United States each year, about 35,000 men die every year from the disease, and about 3 million men are living with prostate cancer today.

“And, looking at our company, we’re really just getting started,” he told.

Prostate cancer doesn’t come with a one size fits all treatment, Rhodes said. A large portion of the patient population are what physicians call “active surveillance” patients. There’s also a subset of those men who seek out treatments and often those treatments, such as radiation or radical prostatectomy, are invasive and associated with significant side effects including impotence and incontinence.

HIFU treatment using EDAP's Focal One provides a less invasive alternative to men who want treatment (as opposed to active surveillance) but want to avoid radiation and/or invasive surgery. Men who undergo HIFU for localized prostate cancer still have the option to undergo radiation or radical prostatectomy down the road, if necessary. 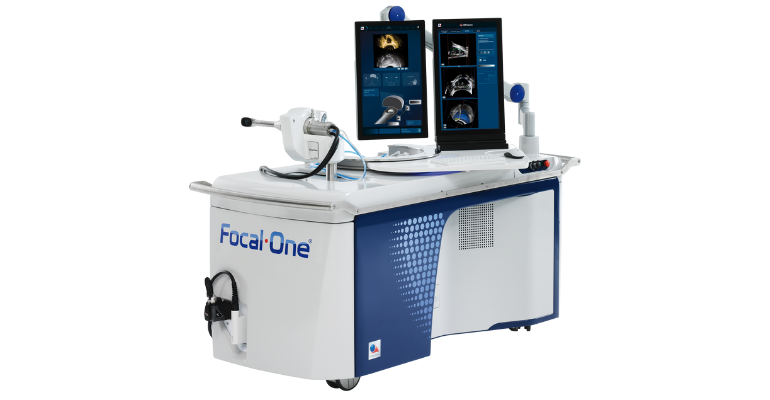 “With our technology there is no incision, no cutting, no blood loss, no radiation. It's a true minimally invasive procedure,” Rhodes said.

While there are other competitors in the HIFU space, Rhodes said the market remains underserved and he believes EDAP’s technology is the best in the category.

“Generally we've been very successful selling our systems into some very notable accounts and we're very proud of some of the hospitals that have acquired our technology," he said.

The John Wayne Cancer Institute in Santa Monica, CA and Maimonides Medical Center in Brooklyn, NY were the first two U.S. hospitals to adopt the Focal One system back in 2019. Since then, EDAP's technology has been picked up by many leading U.S. institutions, including Cleveland Clinic, University of California San Francisco UCSF, Mount Sinai, Mayo Clinic, the University of Miami Health System, Houston Methodist Hospital, and the University of Chicago.

"So we think that there's a strong validation of our technology in the market, and more awareness on both the physician side as well as on the patient side, I think, is important," Rhodes said.

The HIFU market is still in its infancy, and Rhodes said it reminds him of his early days at Intuitive Surgical, when the Irvine, CA-based robotics company was focused on prostate cancer, specifically radical prostatectomy, which was also a very young market at the time.

"And it took a few years to get going, and as we got placements going, and started building programs, and they saw the value of the technology and started marketing it, it really opened up a greater market for others," he said.