Use Error Takes a Hit in New MDR Guidance 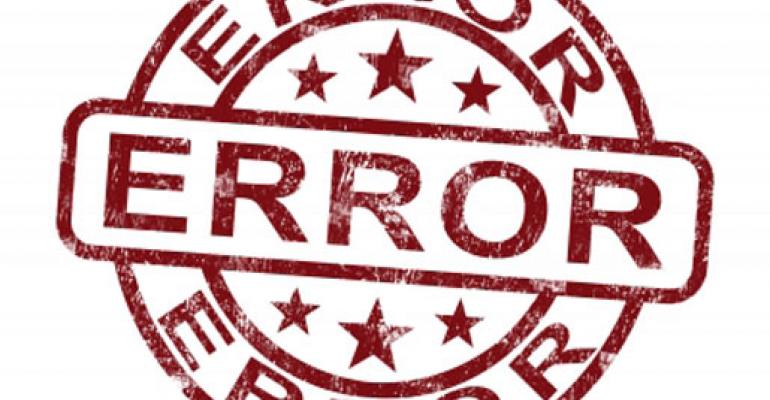 FDA&#39;s final guidance on Medical Device Reporting for Manufacturers eliminates the need to report use errors that don&#39;t result in death or serious injury. An expert explains why this change is a problem.

FDA's final guidance on Medical Device Reporting for Manufacturers eliminates the need to report use errors that don't result in death or serious injury. An expert explains why this change is a problem.

The FDA has released a final guidance on Medical Device Reporting for Manufacturers. This follows the corresponding draft guidance of July 2013 and replaces the guidance of March 1977, which is no longer available on FDA's website. That guidance was ambiguous with regard to the reporting of non-injurious malfunctions caused by user error. Among various revisions from the 2013 draft is the treatment of user error, which the guidance also calls "use error."

To many, these terms are not interchangeable since user error seems to denote clear fault (the user) while use error identifies what happened but leaves the cause open. For instance, the error might have been caused or facilitated by inadequate labeling or bad design. The term "use error" was introduced in MD+DI in 1995 and has since been widely adopted.

FDA notes with regard to use errors that "such errors often reflect problems with device labeling, the user interface, or other aspects of device design." Further, FDA states that it "believes that these events should be reported in the same way as other adverse events which are caused or contributed to by the device." It then goes on to say that such errors related to deaths and serious injuries are to be reported, as has been the case. However, use errors associated with malfunctions that did not result in death or serious injury no longer have to be reported, according to the new guidance.

This is a change from the draft and may reflect feedback from industry participants who did not want to have to report use errors that weren't associated with deaths or serious injuries. It may also be that FDA decided they didn't want to deal with such reports. Unlike the preamble to rules and regulations, which are sometimes cited as agency policy and give a--more or less--detailed analysis of why an agency made the decisions it did, guidance documents are issued without such analysis being publicly reported.

So much for transparency. In contrast, the 1995 MDR Final Rule included 20 pages of notes and comments in the three-column Federal Register format.

While not reportable, malfunction use error information must be maintained in the company's complaint files,  according to the guidance. Unfortunately, such files can become mausoleums for issues that are never looked at again, or perhaps trended but never resolved. Trending often includes the concept that issues that are occurring at a steady and somehow acceptable rate do not have to be further addressed. Here, one might wonder--acceptable to whom? The guidance says nothing specific about addressing non-reportable errors as opposed to simply filing them. In addition, since only external complaints would typically go into the complaint files, if a manufacturer learned of a now non-reportable use error in some other way it is not clear what, if anything, the manufacturer must or should do with that information.

This reduction in reporting is, I think, unfortunate because it cuts off a potentially valuable stream of information that, at least in principle, can be helpful in understanding human factors design and use issues, thereby fostering improved design. Of course, value requires both reporting and analysis. If FDA isn't going to conduct the analysis, then reporting is moot. In particular, non-reporting cuts off information on "close calls," which might be more amenable to open reporting and analysis since there are no injured parties involved. The lack of manufacturer reporting of error-related malfunction is compounded by hospitals (user facilities) not being required to report any malfunctions in the absence of deaths and serious injuries.

Even if not injurious, error-caused malfunctions can be costly if the device has to repaired or discarded as a result of the error, and finding and deploying a substitute device can be disruptive even if there is no immediate measurable harm. As a simple example, suppose user handing of a disposable device resulted in frequent breakage before that device was used on a patient. This would result in simply using another one, which might be handled successfully. The question then is, are the users being too heavy handed, or is the device too fragile? Finding out and resolving the issue would then save the cost of broken unused devices. Moreover, on another occasion the breakage might be partial and undetected until it was put into use and then caused injury.

Another example could be an instruction that says "squeeze as hard as you can." If squeezed with less than adequate pressure, the device might malfunction. Would this be purely the user's fault or might it be a problem with design and labeling? We generally want to be cognizant of errors and determine why they occurred so that they, and similar errors, can perhaps be avoided. Doing so requires data, and that data comes primarily from some form of reporting.

There are other reporting mechanisms available for users. Voluntary MDRs could be reported by hospitals, although in the case of errors this counters a strong don't-tell-anyone mentality. On the other hand, the it-was-the-design's-fault stance could be a popular position that might be best taken before someone blames the user. (Cop shows often describe this as "getting out in front of it.") Similarly, the FDA's MedSun program and other third-party reporting organizations such as ECRI and PSOs could be an outlet for malfunction use error reporting.

In addition, FDA is taking a new look at gathering useful data from hospitals, starting with a December 5 public meeting on "The Role of Hospitals in Modernizing Evidence Generation for Device Evaluation: Harnessing the Digital Revolution for Surveillance." Non-MDR use error could be a focus of this new effort.