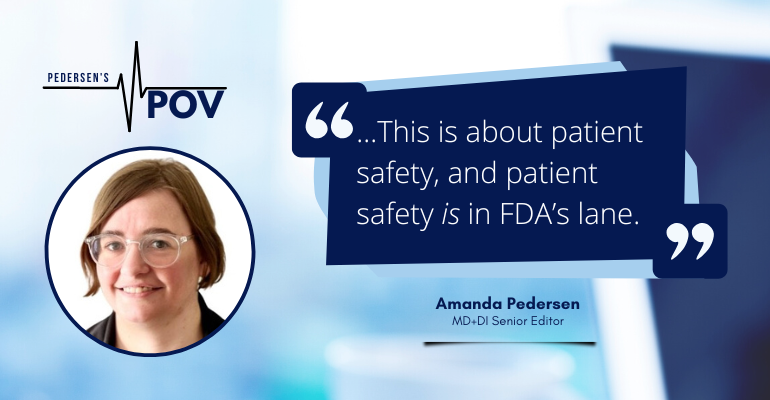 This week in Pedersen's POV, our senior editor takes an unpopular stance on FDA's draft guidance for Lasik eye surgery.

Patients considering Lasik eye surgery need to be better informed of the risks associated with the procedure, according to an FDA draft guidance published earlier this year. Suffice is to say the guidance didn't go over well with eye surgeons and medical device manufacturers.

The 29-page document focuses on the risks associated with Lasik and notes that a few patients have become severely depressed – even suicidal – after experiencing complications from the surgery. People with diabetes and certain other chronic conditions may have a higher risk for poor Lasik outcomes, according to the document. Among the agency’s recommendations is a “decision checklist” describing Lasik surgery, highlighting that the corneal tissue is “vaporized” during the procedure and corneal nerves may never recover from incisions, resulting in dry eyes and, in rare cases, chronic pain.

This decision checklist proposal has many in the industry fired up. They claim that such a checklist is regulatory overreach and would interfere with the doctor-patient discussion.

“The informed consent discussion has always been between the doctor and patient, which we think makes the most sense because the doctor can speak broadly to all of the treatments available,” the Medical Device Manufacturers Association (MDMA) wrote in a statement given to MD+DI. “More importantly, the doctor assimilates the preoperative workup to determine eligibility for a procedure and identifies any specific risks. The doctor engages the patient to understand their unique needs and concerns and is the only one equipped to ensure the patient understands and accepts the risks.”

MDMA submitted comment to FDA stating that imposing these labeling requirements on the manufacturer would cause undue confusion in the informed consent process and that the discussion should be between the physician and patient.

But here’s the thing. Patient decision checklists are not new to the medical device industry.

In 2016, FDA ordered Bayer to require a patient decision checklist be completed for women considering the company’s Essure birth control method. The procedure involved coil-shaped devices inserted into a woman’s fallopian tubes to create a blockage intended to prevent the passage of an egg. Bayer stopped selling Essure in the United States at the end of 2018. Despite thousands of adverse event reports and patient lawsuits, the company insisted that its decision to pull the controversial birth control product from the market had nothing to do with safety or efficacy concerns and everything to do with a decline in U.S. sales of the device. But the timing of the announcement seemed awfully suspicious, given that it came just days before the documentary The Bleeding Edge premiered on Netflix featuring horrific patient stories of Essure-related complications.

In October 2021, FDA restricted the sale of breast implants to healthcare providers and facilities that review a decision checklist with patients. The checklist essentially mandates a discussion between surgeons and patients to ensure patients understand the risks, benefits, and other information about breast implants before getting them.

In a perfect world, every doctor would take the time to thoroughly discuss potential benefits and risks of a procedure with every patient. But doctors are on a clock. They are under pressure to get through as many patient visits in a day as possible. As a result, doctor-patient discussions tend to be rushed, and patients don’t always know the right questions to ask about a procedure they’re considering. If a checklist helps to ensure patients make an educated decision – about Lasik, breast implants, or any other procedure – what’s the harm?

The MDMA and other industry groups did raise some other good points about FDA’s draft guidance on Lasik eye surgery, such as the agency’s reliance on older data. But to suggest that a decision checklist is somehow overstepping doesn’t hold up. At the end of the day, this is about patient safety, and patient safety is in FDA’s lane.

Pedersen's POV publishes every Monday. You may reach her at [email protected] (please put “POV” in the subject line).