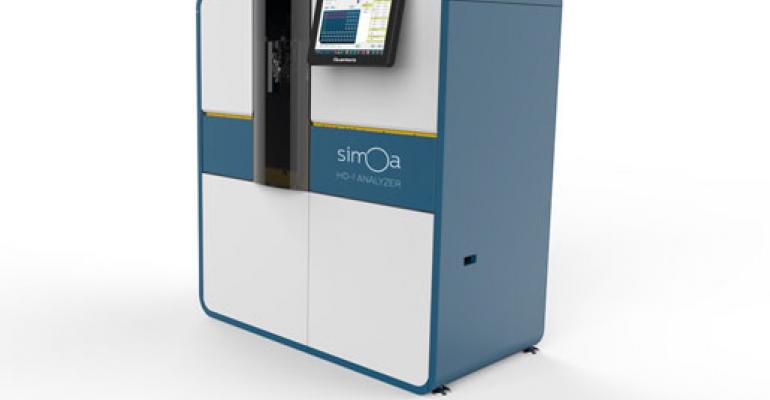 Quanterix is focused on detecting small concentrations of protein biomarkers to enable earlier diagnosis of cancer.

Quanterix is focused on detecting small concentrations of protein biomarkers to enable earlier diagnosis of cancer.

Quanterix's Simoa instrument, which can detect low concentrations of protein in a sample of blood, offers the potential for earlier diagnosis of disease.

When cancer is suspected, a simple blood test can confirm it. Liquid biopsies detect the presence of tumor cells or cancer DNA circulating in the blood. But by that point, a cancer may already be advanced. Kevin Hrusovsky, CEO of diagnostics technology company Quanterix, says a different biomarker can lead to an earlier diagnosis--even before a patient experiences symptoms.

Organs affected by disease or injury release proteins that serve as telltale markers of a health condition. But these proteins are hard to detect in blood, typically occurring in concentrations too low to be measured by modern diagnostic equipment, Hrusovsky explained. Lexington, MA-based Quanterix has developed technology that can detect these small concentrations of proteins in blood. Hrusovsky likens this capability to being able to see a single blade of grass in a field the size of Alaska.

"We can see at a sensitivity that's about 1,000 times more sensitive than technology currently available," he said.

The speed and low cost of polymerase chain reaction (PCR) tests have made DNA the biomarker of choice in cancer diagnostics. Hrusovsky acknowledged the role that tests for circulating tumor cells (CTC) or circulating tumor DNA (ctDNA) play in diagnostic medicine. But he argues that protein is the more biologically relevant biomarker. As an example, he points to gene tests for the BRCA gene, whose presence indicates an increased risk of developing breast or ovarian cancer. About half of women who test positive for the gene don't develop cancer. Proteins are the more relevant measure because they are only produced when certain lifestyle or environmental factors trigger the body to make them, Hrusovsky explained.

Quanterix's instrument, called Simoa, employs tiny magnetic beads that contain an antibody to test for proteins. These beads populate 221,000 tiny wells on a disc the size of a CD. Simoa pours the sample over the wells, and translates the detection of a protein into a digital analysis. The underlying technology was developed by David Walt, the scientific founder of Quanterix and the founder of San Diego gene-sequencing technology company Illumina. Illumina uses the bead-based technology in DNA analysis. Quanterix licensed the technology from Illumina for protein analysis.

There are a number of diagnostic tests for proteins, but usually these assays can't detect proteins until they appear in large concentrations, said Mark Roskey, Quanterix's vice president and general manager of applications and reagents. The challenge for protein-based tests is that there are many diseases where proteins aren't produced in large amounts, or conditions where it takes time for proteins to accumulate.

Neurological conditions present an even higher hurdle. The blood brain barrier keeps cerebrospinal fluid from mixing with blood, making a blood based test for proteins difficult. Hrusovsky said that researchers have discovered that proteins do cross the blood brain barrier, but at very small concentrations. Simoa detects those small concentrations. At about $10 per protein test, Simoa could disrupt the expensive imaging technologies currently used for diagnosing brain conditions, Hrusovsky said.

Research confirming Quanterix's test results have been documented in peer-reviewed, third-party publications. The company aims to reach the diagnostics market as a laboratory developed test, a pathway that relies on such published research rather than a regulatory review by FDA. So far, Quanterix has 20 publications showing that Simoa can measure proteins in blood indicating a concussion; the company has another 15 publications showing the technology can detect a heart attack before the patient experiences chest pain. Additional studies are forthcoming in inflammation and oncology. Hrusovsky said that one of these papers, a breast cancer study, is due to be published in coming months.

Though Quanterix is not yet available for diagnosing patients, the company already has partners and customers. Pharmaceutical companies have purchased more than 100 of the $160,000 Simoas, which they use to help evaluate the neurological drugs they are testing in clinical trials. Quanterix also makes money by selling the reagent and test kits used in Simoa.

A third revenue stream comes from operating as a service provider for organizations that want to run tests for their own research but don't want to own a Simoa. In some of these cases, Quanterix supports research by awarding grants. One recent award went to scientists at the National University of Ireland researching protein biomarkers for breast cancer. Recipients of these "Accelerator Grants" receive Quanterix's test services for free.

Three years ago, Quanterix was focused purely on diagnostic disease and was far from generating any revenue from diagnostic applications. Expansion of Simoa's use now puts Quanterix on track for more than $19 million in 2016 revenue, Hrusovsky said. The pivot has won over investors, who earlier this year infused Quanterix with $46 million in new funding to support the company's growth. Hrusovsky said the company is expanding Simoa's menu of protein tests, which could reach 150 by the end of next year. Quanterix is also developing a bench top version of its refrigerator-sized Simoa.

"We rejuvenated [Quanterix] and sparked a new level of growth that enables us to get more private funding," Hrusovsky said.