Patient Injuries and Physician Complaints Trigger a Recall for Cordis 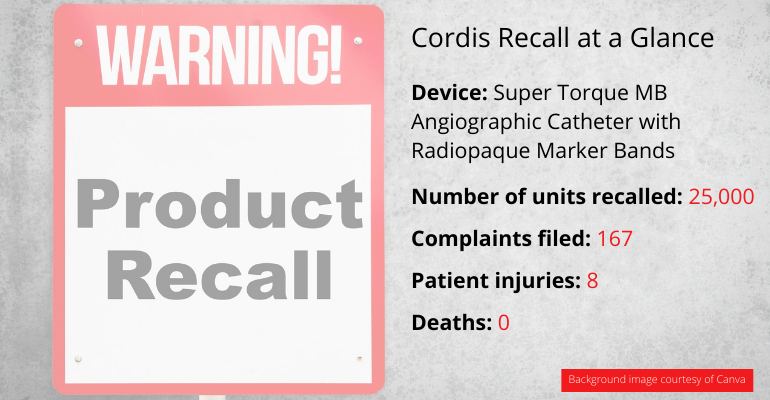 Cordis is recalling thousands of angiographic catheters due to a problem with marker bands.

Correction: An error associated with this story appeared in the Qmed MD+DI Daily Europe newsletter on September 24. We incorrectly stated that a J&J medical device was injuring patients and that J&J was recalling Cordis’s Super Torque MB Angiographic Catheter. In fact, J&J had divested itself of the Cordis business in 2015.

At least eight patients were injured during angiographic procedures with a catheter made by Cordis, a business previously owned by Johnson & Johnson, and then Cardinal Health.

The Cordis Super Torque MB Angiographic Catheter with Radiopaque Marker Bands is used to visualize and measure parts of the vascular system when used with radiopaque (X-ray detectable) contrast media. The problem is that the marker bands can move or dislodge during procedures where the catheter is trapped between another device and the vessel wall. FDA said this can cause serious adverse events including procedure delays, the need for additional procedures, heart attack, or stroke.

In addition to the eight patient injuries, there have been 167 complaints filed about this issue, but so far no deaths have been reported.

Cordis initiated a recall of the device in May, and FDA issued a notice this week, calling it as a class I recall. The recall includes 25,000 devices in the U.S. market that were distributed between Jan. 1, 2019 and July 20, 2021.

This is the second medical device Cordis has recalled this year. In February, Cordis recalled its Precise Pro Rx US Carotid System because of a risk of separation of the atraumatic distal tip of the sheathed delivery system in patients. There were seven complaints, including five reported injuries, at the time FDA issued that recall notice in April. FDA has issued a total of 47 recall notices so far this year.

Both this and the earlier Cordis recall were initiated while the company was still owned by Cardinal Health. Cardinal bought Cordis from J&J in 2015 for nearly $2 billion, but the business became a drag on earnings. Cardinal sold the business to private equity firm Hellman and Friedman for $1 billion in a deal that closed last month, but was first announced in March.