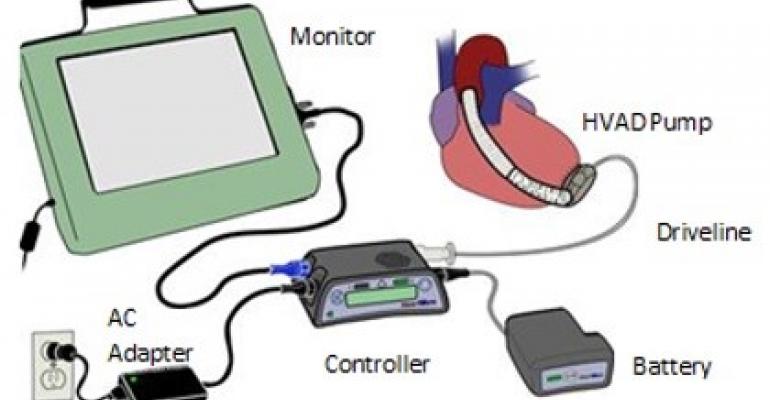 The Class I recall includes 204,017 HeartWare devices, but the likelihood of the problem causing a serious adverse event in a patient is very low.

Medtronic has encountered another problem with the HeartWare ventricular assist device (HVAD) it acquired in 2016. FDA gave the recall a Class I designation, making it the most serious type of recall, however, the patient risk appears to be very low.

The company recently penned a "dear doctor" letter about the potential for an interruption of the electrical connection between the device's power source (battery, AC adapter, or DC adapter) and the HVAD controller. This interruption may cause the device to switch to a secondary power source and/or emit a beeping sound. Medtronic said the interruption is caused by oxidation of connecting surfaces between a power source connector and the controller's power source socket, and typically lasts up to 2 seconds.

FDA said 204,017 HeartWare devices are included in the recall. According to Medtronic, patients are instructed to keep their HVAD connected to two power sources. The per-patient probability of the electrical disconnection issue causing serious adverse events is only 0.003, the company said.

It is possible, however, for such a disconnection to cause the pump to stop, which could exacerbate the patient's heart failure symptoms or trigger related symptoms like mild weakness, dizziness, anxiety, nausea, loss of consciousness, or even death.

Patients with end-stage heart failure and patients who are completely dependent on the HVAD system for their cardiac output are at greatest risk of harm, FDA said.

Medtronic noted in its letter to physicians that it has continued to develop and implement enhancements to the HVAD system to improve power source connectivity and reduce the potential for unintended power source switching. The company said it has identified specific mitigations for current patients and future system enhancements that will be applied during manufacturing, pending FDA and other regulatory agency approvals.

The company faced two significant recalls involving the HVAD just before after it acquired HeartWare in 2016. One involved 8,799 HVAD controllers that were potentially damaged from exposure to moisture through loose power and data connectors. The other involved 350 unimplanted kits sitting in hospital inventory that were susceptible to electrical faults and connection failures from fluid entering the driveline-to-controller connector.

And yet those recalls paled in comparison to HeartWare's major battery recall involving more than 18,000 HVAD batteries sold between 2013 and 2015, also prior to Medtronic buying the company.