Medical Device Recalls Were up in the First Half of 2021 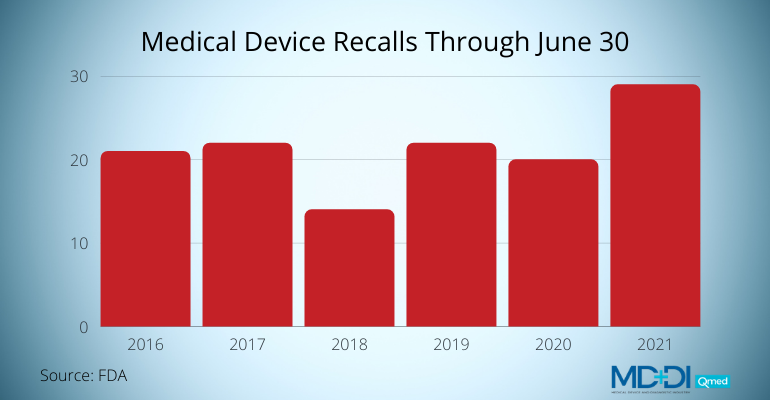 So far this year, FDA has reported on 29 medical device recalls, including Philips' recently announced recall of sleep apnea devices and ventilators. At this point in 2016 through 2020, FDA had reported on 21, 22, 14, 22, and 20, respectively.

To be fair, however, some of the reported recalls this year are related. For example, Medtronic issued three separate recalls related to different aspects of its HeartWare HVAD System before announcing in June that it is pulling the plug on the system permanently.

While the majority of recalls FDA has classified this year have not been associated with any patient injuries or deaths, nearly a dozen of them have. Among the most serious of these are the three recalls related to Medtronic's HeartWare System. One of these recalls, the one involving the HVAD pump implant kits, were linked to two deaths, eight patients who had a life-threatening event but recovered, and 19 serious injuries. A separate recall impacting HeartWare HVAD battery cables, data cables, adapter cables, and controller ports has been associated with 12 deaths and eight injuries. Later, Medtronic recalled the HeartWare HVAD instructions for use and patient manual to update information about the system's carrying case, driveline cover, and controller power-up issues. FDA said one death and 64 injuries had been reported for those issues.

Medtronic's recall of the Valiant Navion Thoracic Stent Graft System was also fairly serious with two injuries and one patient death. That recall is due to stent fractures and endoleak concerns.

Boston Scientific's Emblem S-ICD Subcutaneous Electrode recall also was serious, with 26 serious injuries reported and one death. That recall is due to increased risk of fractures at a specific point (distal to the proximal sense ring). It should be noted that Boston Scientific initiated this recall in December 2020, however it is included in the 2021 data because that is when FDA classified and posted it. There is often a lag between when a company initiates a recall and when the agency posts it. For the sake of consistency in reporting, we use FDA's posted date for tallying recalls in a given period. 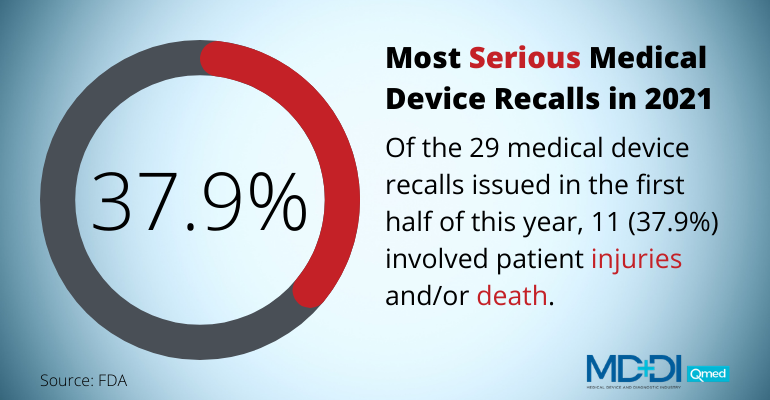