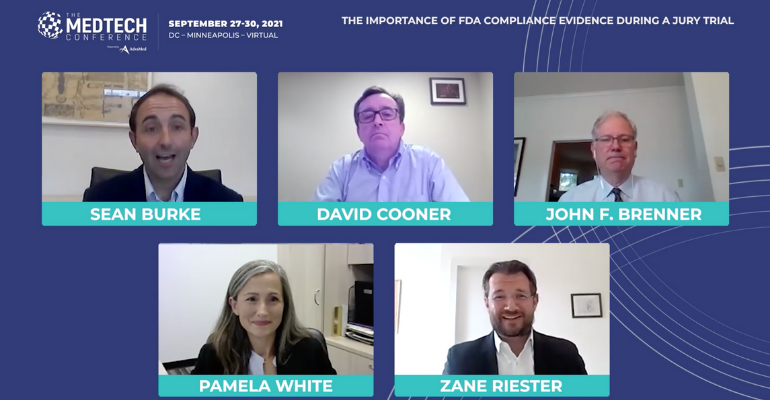 Without being able to present evidence of FDA compliance, medical device companies face an uphill battle in court.

Medical device liability cases have always been an uphill battle for companies to fight, but that battle has become steeper in recent years as more courts across the country have banned FDA compliance evidence from being admitted to a trial. In other words, companies can't really tell the jury their side of the story, so the liability burden has shifted.

"That leaves medical device companies in a very difficult position of having to defend themselves against allegations that they acted unreasonably, without being able to tell their side of the story, and how they brought this product to market through FDA channels," said Sean Burke, attorney and vice chair of the products liability and toxic tort trial division at Duane Morris. "It’s a huge problem."

Burke, whose practice focuses on defending and advising medical device clients against the threat of product liability exposure, moderated a panel discussion on the subject Tuesday during The Virtual MedTech Conference 2021, hosted by AdvaMed.

Why are medical device liability cases such an uphill battle?

When talking about a medical device liability claim, the plaintiff argues that the product was defective either by design, manufacture, or labeling, and that the defect caused the plaintiff injury, Burke said. It used to be that those cases focused on an individual plaintiff and their injuries, but today's medical device liability lawsuits are often consolidated, at least for pre-trial purposes, in groups of 10s, hundreds, or even thousands of cases brought before a single judge, he said.

In recent years, the plaintiffs’ bar has adopted the reptile theory, which Burke said focuses the narrative of the case on the alleged wrongdoing of the company, rather than on the plaintiff’s experience.

"The idea of the theory is that if you can scare the jury into thinking that there's this reported bad actor out there, their natural instincts will be to protect themselves," Burke said. "And the way they protect themselves is by awarding big verdicts."

So far, the reptile theory seems to be working, because the number of medical device liability cases filed across the country has skyrocketed in federal courts over the past five or six years, and Burke said almost 100,000 cases are filed every year and the plaintiffs in these cases are being awarded huge amounts of money in the verdicts.

That same theory is, in part, what made the Netflix documentary The Bleeding Edge so successful when it premièred in 2018. In telling stories like that of Ana Fuentes, pictured below, the film makers triggered our natural instincts to worry about how the medical device industry's conduct did not merely harm the people featured in the film, but posed a threat to the community – including us and our loved ones. 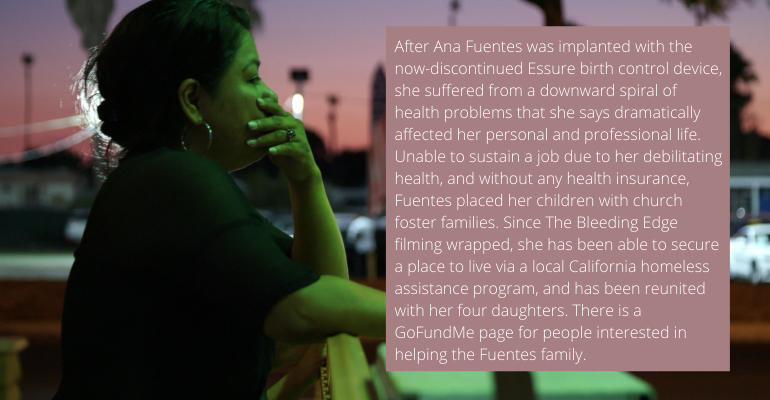 Most medical devices on the U.S. market go through the 510(k)-clearance process rather than the more stringent pre-market approval (PMA) process. The touchstone of the 510(k) pathway is whether or not the company seeking clearance has properly demonstrated that the device is just as safe and effective as a substantially similar product that is legally marketed in the United States.

Unfortunately for the medical device companies and their defense attorneys, the plaintiffs’ bar has latched onto that language in an effort to poke holes in the 510(k) process, Burke said. Their argument in these medical device liability cases is that there is no independent finding by FDA that the device in question is safe and effective, just a finding that the device is similar to another product already on the market. The plaintiff's lawyers then take that argument and compare FDA clearance via a 510(k) to FDA approval via PMA.

"And they will use that to advance their narrative that the 510(k) is nothing more than a rubber stamp, a loophole," he said. "...And the courts, many of them, have bought into this argument, and they found that that evidence is not admissible in court." 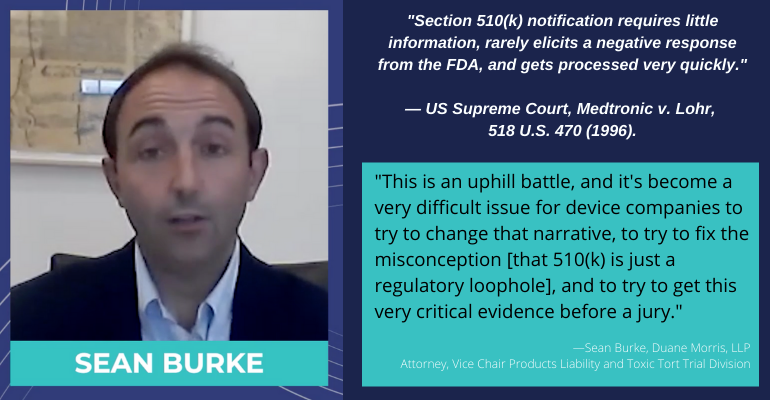 What happens when the defense can't show FDA compliance evidence to a jury?

“I've been doing this for 41 years, and for the vast majority of that time it was a given in product liability suits that there would be some discussion of the regulatory processes that led to the introduction of the product in question to the market,” said John Brenner, senior legal advisor at BD, who served as a panelist during the conference session. "No one ever doubted that the evidence of FDA’s involvement was relevant."

That changed, in a big way, in 2013, in a case against Brenner's client, C.R. Bard (BD acquired Bard in late 2017). Brenner said the plaintiff's attorneys launched an argument during that case that 510(k) evidence was not relevant and would only confuse the jury. Unfortunately for Bard, the judge agreed. Brenner said that kickstarted a trend that worked against the industry, a trend that hit a low point in 2018 when a trial court in New Jersey, in the case McGinnis v. C.R. Bard, took the theory to the extreme. 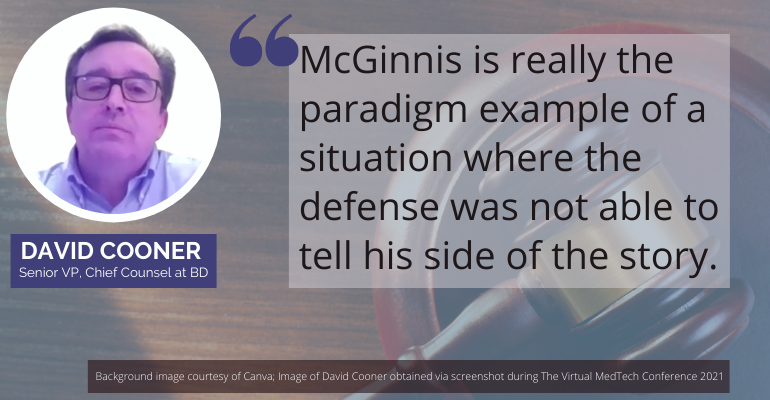 "There could be no discussion ... no reference in any fashion to the fact that the product in question, their transvaginal mesh, did get through the 510(k) process, is properly cleared, and there was a whole lengthy history that actually bore on that particular plaintiff's claims," Brenner said. "We could talk about none it. It was as though the FDA did not exist. So as far as the jury knew from the evidence presented, the product was brought to market [in] a rogue fashion, no oversight at all, because there was not one word, not one syllable about FDA."

David Cooner, a senior vice president and the chief counsel at BD, explained how the plaintiff's counsel in McGinnis v. C.R. Bard took full advantage of that pre-trial order, which resulted in a $68 million verdict.

“He exploited the court’s rulings and presented argument and witnesses stating that pre-market clinical trials were needed and that they were required. Well, as he was saying that they were needed and required, Bard was prevented from telling its story to the jury, one where the FDA was part of the story, and one where the FDA did not require such testing," Cooner said. "Worse, during the punitive portion of the trial, the plaintiff’s counsel scolded Bard for not doing certain testing, and asked the jury to punish Bard.”

Cooner said that Bard "took it on the nose" no fewer than 23 times during the jury trial because the company was prevented from explaining why it did not conduct pre-market clinical trials, and how the company did comply with FDA's requirements.

The McGinnis case has been in the spotlight lately because in 2019 the U.S. Chamber urged the New Jersey Appellate Division to reverse the trial court order that prevented Bard's defense attorneys from presenting evidence related to the FDA 510(k) process. Click here to view the amicus brief filed by the U.S. Chamber, Advanced Medical Technology Association (AdvaMed), and the National Association of Manufacturers. Earlier this year (March 2, 2021), the New Jersey Appellate Division did, in fact, reverse the trial order that prevented Bard from presenting evidence regarding the FDA clearance process. Click here to view the opinion.

"If you have to describe the appeal in one word it would be fairness," Cooner said. "It was telling our side of the story because that’s what's fair. The appellate division, happily, agreed with us, and for the first time a state appellate court recognized that the exclusion of FDA clearance evidence would be unfairly prejudicial to the defendant, and the verdict is overturned."

Brenner and Cooner both noted that there are ongoing proceedings in the matter, so there will likely be more news to come regarding that particular medical device liability case.

How the pandemic has impacted this issue

Pamela White, chief legal counsel at Stryker, said the ability for the defense to tell its side of the story regarding FDA compliance during a medical device liability jury trial takes on even more importance after COVID-19.

"The awareness of the FDA and the role that the FDA plays in regulating drugs and medical devices, although was already very familiar to us in the industry before COVID happened, but for people who don't work in the industry, although they may be aware of the FDA generally, that level of familiarity has certainly increased, and it only strengthens the arguments that David mentioned that the jury expects to hear about the roles that the FDA plays."

In the context of jury trials, the absence of mention of the FDA clearance may have gone unnoticed, or might not have held as much weight in jurors' minds before the pandemic.

"But now if there's no mention of the FDA, red flags are immediately going to go up in jurors' minds, and they may jump to the erroneous conclusion that there was no FDA clearance, or wonder what happened," White said. "They would think that, for sure, if there was a clearance, that they would be hearing about it, and the defendant would be presenting that evidence." 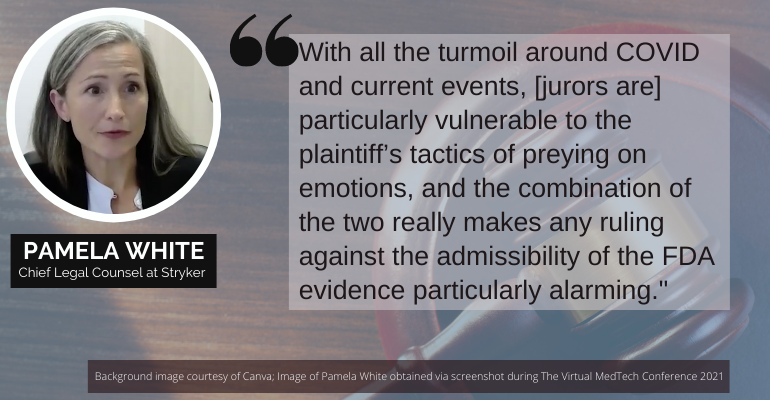 How can medtech counter the court’s misconceptions about FDA 510(k) clearance?

The Supreme Court quote about a 510(k) notification that Burke referenced stems from Lohr v. Medtronic, a 1996 case that has largely been misapplied to medical device liability cases against manufacturers. In Lohr, the U.S. Supreme Court addressed whether complying with 510(k) premarket requirements preempts state law negligence claims against medical device companies. The plaintiff in that case brought a state law negligence claim against Medtronic, alleging that the company breached its duty of care in the design, manufacture, and sale of a pacemaker. Medtronic argued that its compliance with the FDA clearance process preempted state law tort claims, but the high court held sided with the plaintiff.

“Lohr is an old case involving a long-discarded approach,” Brenner said. “…What FDA 510(k) looks like today is nothing like what it looked like in Lohr.”

He simplified the FDA compliance evidence admissibility issue by using a car crash as an example.

“Wouldn’t the jury at least want to know what the speed limit was, and whether I was compliant with it or not? It may not tell the whole story – maybe it was raining, maybe it was late, maybe I was drunk,” he said, adding that none of those other factors make the speed limit, and the driver’s speed at the time of the crash, any less important for the jury.

In an effort to convince the court to allow FDA compliance evidence into a liability trial, Brenner suggested the McGinnis case as a cautionary tale of what happens when that evidence is excluded from trial.

Finding ways to educate the court on the regulatory process can also help get that compliance evidence admitted into trial, White said.

“It’s the FDA that determines what the best pathway to market is,” she said. “It isn’t up to the corporation to say that they’re going to follow the 510(k) process and the FDA to go along with that, it’s the FDA, at the end of the day, who says what’s necessary and what’s not necessary. So, emphasizing that point and that the defendant wasn’t looking for some sort of shortcut or legal loophole [can work].”

Zane Riester, senior counsel at Johnson & Johnson, said the best way to convince a judge to allow FDA compliance evidence into a medical device liability trial is to lean into the punitive damages story.

“It really goes to punitive damages. I think there was a focus, initially with this evidence, that it would go to device effectiveness. I think that’s less effective,” said Zane Riester, senior counsel at Johnson & Johnson. “But when it goes to corporate conduct, and the reasonableness of the conduct, especially under punitive damages, it becomes critical evidence.”