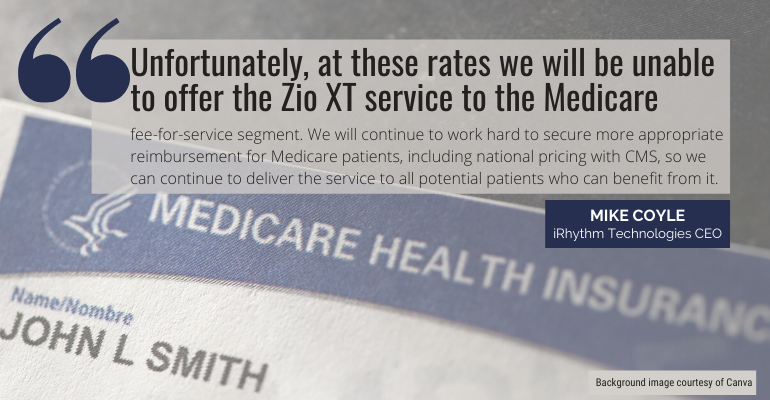 The rates posted by Novitas Solutions, a Medicare Administrative Contractor, are higher than the rate set in late January, but still considerably lower than the reimbursement rate iRhythm was previously receiving for its wearable heart monitoring technology.

iRhythm Technologies' stock took another nosedive Monday after Medicare Administrative Contractor (MAC) Novitas Solutions updated its reimbursement rates over the weekend for codes that cover iRhythm's Zio Patch. The new rates for CPT codes (current procedural terminology) 93243 and 93247 were set at $103 and $115, respectively, and are retroactive to the beginning of the year.

The new reimbursement rates are higher than the rate reported in January (about $43), but are still quite a bit lower than the reimbursement rate iRhythm was previously receiving (about $300 or more) for its wearable heart monitoring patch. iRhythm said Monday that the newly published rates do not appropriately reflect the clinical and economic value that long-term continuous ECG monitoring offers patients, their care teams, and the Medicare system.

"Due to the cost of providing the service relative to the updated rates published by Novitas, iRhythm will not be able to provide its Zio XT service to the Medicare fee-for-service segment if these rates remain unchanged," the company said in a statement. "Accordingly, iRhythm is preparing an operating plan to discontinue serving this Medicare segment with Zio XT that it expects to begin implementing in the second quarter."

The San Francisco, CA-based company said it will continue to work with Novitas and other MACs regarding the clinical and economic value of the Zio XT service. iRhythm said it has also been in talks with the Centers for Medicare & Medicaid Services (CMS) about the potential establishment of national pricing for these codes.

“Unfortunately, at these rates we will be unable to offer the Zio XT service to the Medicare fee-for-service segment,” said Mike Coyle, iRhythm president and CEO. “We will continue to work hard to secure more appropriate reimbursement for Medicare patients, including national pricing with CMS, so we can continue to deliver the service to all potential patients who can benefit from it.”

iRhythm analyzed the impact the updated Novitas rates would have had on full year 2020 reported revenue and gross margin had those rates been in effect in 2020. The updated Novitas rates would have negatively impacted 2020 Medicare revenue by $41.3 million and would have decreased 2020 total company revenue from $265.2 million to $223.8 million, or a decrease of 15.6%. In addition, 2020 total company gross margin would have decreased from 73.5% to 68.6%, iRhythm said. Medicare reimbursement represented 27% of iRhythm’s overall revenue in 2020, with a small percentage of that 27% attributable to Zio AT and Zio XT for wear of less than 48 hours, for which services are priced nationally and not impacted by the updated Novitas rates.

The company's stock price dropped 39.47% on Monday to close at $80.36. This plunge is especially significant considering that the stock was still down from where it was at on Jan. 28 ($251), the last trading day before news broke on Jan. 29 that Novitas was looking to drastically cut reimbursement for those CPT codes.

"We do not see a clear path forward to restore Medicare reimbursement, and believe there is risk that commercial payer rates see downward pressure overtime," David Saxon, a medtech analyst at Needham & Co., said in a report published Monday afternoon.