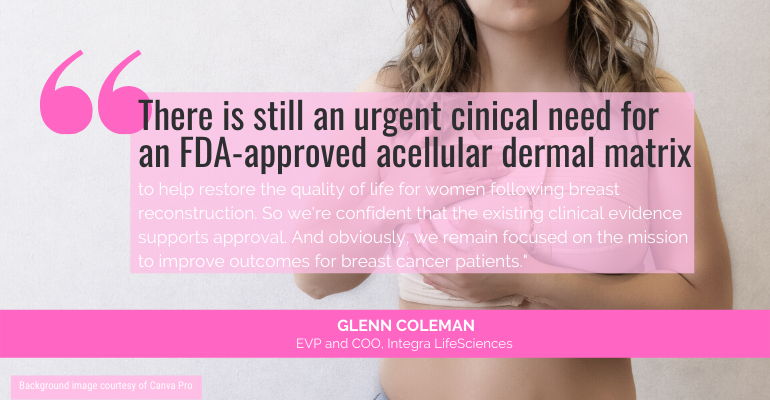 Despite getting shot down by a recent FDA advisory panel, Integra's management team still seems confident that the agency will ultimately approve SurgiMend for post-mastectomy breast reconstruction.

An FDA advisory panel on general and plastic surgery recently shot down Integra LifeSciences' SurgiMend mesh for the specific indication of breast reconstruction, even though the device has been used in breast reconstruction for more than a decade under a 510(k) clearance.

All hope may not be lost, however. During Integra's third-quarter earnings call, the company's management team sounded confident that FDA approval for post-mastectomy breast reconstruction is still within grasp.

A specific indication for breast reconstruction — which no device currently has — would position Integra in a $500 million market that is expected to grow to $900 million by fiscal year 2025. The SurgiMend device is currently indicated for use as a reinforcement for soft tissue where weakness exists, including within plastic and reconstructive surgery.

Glenn Coleman, executive vice president and chief operating officer at Integra, said the panel meeting on October 20 was an important review of the clinical section of Integra's pre-market approval application (PMA), and he called it "one step" in the broader FDA product review and approval process. He explained that Integra worked with FDA to design a statistical analysis plan for the Mastectomy Reconstruction Outcomes Consortium (MROC) study data, which was a large multicenter study that examined outcomes for thousands of breast reconstruction patients.

"This analysis demonstrated that results with SurgiMend PRS (plastic and reconstructive surgery) and post-mastectomy implant-based breast reconstruction are superior to the results in such procedures when no acellular dermal matrix is used," Coleman said during the earnings call. "Nevertheless, we've always recognized that there are limitations in the MROC study data, and this was reflected in divided voting results from the panel regarding safety, efficacy, and whether the benefits outweigh the risk. We appreciate the FDA panel members' insights and discussion regarding our PMA."

The SurgiMend device is primarily composed of intact, extracellular collagen fiber matrix of fetal bovine dermis. Biological meshes are biodegradable and are formed by processing and sterilizing human, cow (bovine), or pig tissue to remove cells, resulting in a collagen, acellular dermal matrix (ADM). In the past decade, surgeons have begun using surgical mesh products to assist with these reconstructive procedures, and ADM mesh products are now used in the majority of implant-based breast reconstruction procedures in the United States, according to the executive summary of the PMA. FDA has not cleared or approved any surgical mesh device – whether synthetic, animal collagen derived, or human collagen derived – specifically indicated for breast reconstruction.

Coleman said there is an urgent clinical need for an FDA-approved ADM to help restore quality of life for women following breast reconstruction.

"We look forward to working with the FDA in the coming months as the agency completes its review of our PMA submission, and we believe the real-world clinical evidence supports approval," he said.

One of the interesting point about the MROC data is that FDA had access to de-identified patient-level MROC study data, but the company was not able to see the real-world evidence heading into the advisory panel meeting. Coleman noted that FDA has stated that all acellular dermal matrix (ADM) products, including human ADM products, require a PMA. So far, Integra is the only company to file a PMA for a breast reconstruction indication. He said the clinical data that is part of the company's PMA is partially based on the MROC study, which he said is considered to be high-quality, real-world data.

Coleman said that because the company recognizes that there are some limitations to the data, Integra is working with FDA to design a post-approval study to supplement the existing data.

Although the panel voted against recommending approval of the SurgiMend device for the breast reconstruction indication, the agency will make the final decision. While FDA rarely disagrees with the panel's recommendations, it has been known to happen. A study published in 2019 sheds some light on how often FDA goes against panel recommendations, and some of the circumstances that lead to a discordance between the committee vote and final FDA decision. Click here to read more about that study.

"Their recommendation is really advisory," Coleman said of the advisory panel. "And so we're going to continue to move forward with the work that's going on here. The vote from this panel obviously doesn't change any current practices that are going on among surgeons. And there is still an urgent clinical need for an FDA-approved acellular dermal matrix to help restore the quality of life for women following breast reconstruction. So we're confident that the existing clinical evidence supports approval. And obviously, we remain focused on the mission to improve outcomes for breast cancer patients."

This PMA process is happening at the same time as the company is undergoing a major leadership change. Peter Arduini is stepping down by the end of the year as CEO of Integra to become CEO at GE Healthcare. As MD+DI recently reported, Arduini will be replaced by healthcare industry veteran Jan De Witte.

"I think the other aspect here about this that is really important is the fact that we believe strongly that SurgiMend has unique characteristics, no other product has, including human-based cadaveric product," Arduini said during the earnings call. "And that is [three] things. It's unbelievable strength that it has. And as the procedure volume changes to new procedures with wider coverage, we believe it's going to bear out to be the leading product. Secondly, our process for how we actually cellularize its acceptance, its body low-rejection rate is second to none. And the third is its characteristics on revascularization, which again becomes very, very important if you want us to be actually an integrated part into the body. And so those are the three things that we keep as the beacon tied to what Glenn said, which is fighting for women to have the right to have a product and reconstruction post-mastectomy. So it's a really important part of the plan, and the journey is long, but we think we're on the right path here."