How to Survive Medtech's 'Death Valley'

Graphic by Amanda Pedersen, based on Marc Oczachowski's recommendations. 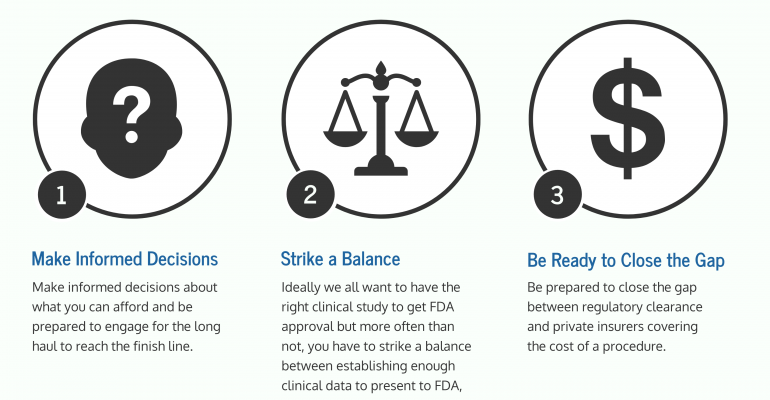 There is a lot to learn from EDAP TMS' journey through the U.S. regulatory and reimbursement process.
A medical device CEO shares lessons learned from his company's 14-year journey from FDA approval to reimbursement in the U.S. market.

Medical device companies attempting to market a new treatment in the U.S. often make the erroneous assumption that winning FDA approval is the final destination, and success is theirs. In fact, going through the regulatory process is only the halfway point. The grueling path from FDA approval to reimbursement is like a treacherous walk through Death Valley and many companies don’t make it through.

In this case study, I discuss the trials and triumphs of bringing robotic high intensity focused ultrasound (HIFU), a non-invasive procedure for localized prostate cancer, to the U.S. I'll shares lessons learned as EDAP TMS began its 14-year journey, starting with the FDA pre-market approval (PMA) process, shifting to the more expedient de novo 510(k), and winning FDA clearance. Then getting through the Death Valley gauntlet to finally win the American Medical Association’s (AMA) approval of a new Category 1 CPT code for treating prostate cancer, and reimbursement from insurers.

Jumping Through Hoops: The Rigors of FDA Approval

We faced a protracted process when we first applied for a PMA for EDAP’s first HIFU device. HIFU is a non-invasive option that had been in use in Europe, Asia, and South America since 2000.  It allows the surgeon to destroy only the diseased portion of the prostate, thereby preserving healthy surrounding tissue and nerves. As a result, HIFU minimizes the risks of side effects typically associated with the more aggressive treatments like radical surgery or radiation therapy, including erectile dysfunction and urinary incontinence.

Based on FDA feedback, we commissioned a three-year, multi-centered clinical study of 135 U.S. patients to evaluate the efficacy of HIFU as a treatment for localized prostate cancer. We partnered with a leading urologist at Duke University, as well as urologists from high-level institutions around the United States to conduct this research.

The study demonstrated the efficacy of cancerous tissue ablation using HIFU. Because the study mandated by FDA was performed on low-risk patients and the two-year follow-up was too short to draw a conclusion about oncological control, panel members could not confirm the effectiveness of our device as a prostate cancer therapy. To win approval of HIFU as a treatment for localized prostate cancer would have required a long term, randomized multi-centered study with more than 1,000 patients.

At that point, FDA recommended that we apply for clearance of the device for prostate tissue ablation, based on a de novo 510(k), rather than seeking approval as a device to treat a particular disease. After about six months (October 2015), FDA cleared HIFU for prostate tissue ablation based on the results of the same 135-patient study. But it took 10 years altogether to navigate the FDA path and receive clearance. We also had to convince urologists and hospitals to take a bet on our first-generation device, as patients would have to pay out of pocket for the procedure because it was not yet covered by Medicare or private insurance.

Fortunately, once a medical device is FDA cleared and new iterations of the same technology are released, the approval process is faster and clinical data outside the United States becomes acceptable. When we launched our second-generation HIFU system (Focal One), we could submit clinical data from several European studies, and that expedited FDA clearance.

When we finally got market clearance for Ablatherm in the United States, Focal One had been approved two years earlier and was already in use throughout Europe, Asia, and South America. Focal One is designed specifically for focal treatment of the prostate. It fuses MRI and 3D biopsy data with real-time ultrasound imaging, which allows urologists to view integrated, detailed 3D images of the prostate on a large monitor and direct high-intensity ultrasound waves to ablate the targeted area. With Focal One, urology surgeons can establish precise contours around the diseased tissue and ablate an even smaller portion of the prostate.  This lessens the damage to healthy tissue and minimizes side effects of incontinence and impotence for patients. Using Focal One, surgeons can customize the HIFU procedure for each patient and each clinical condition.

Brian Miles, MD, a renowned Houston urologist who performed the HIFU procedure at Houston Methodist Hospital using our first-generation device observed Focal One in Germany and wanted to bring the new device to the hospital even before it was FDA cleared.

“Focal One gives Houston Methodist Hospital urologists the ability to plumb the depths of something until recently considered heresy," Miles said. "The possibility of focal therapy to ablate only the diseased portion of the prostate is like performing a lumpectomy to remove only the diseased tissue of the breast in women with breast cancer.  We can now take only the infected tissue and leave the healthy tissue intact.  Focal therapy still leaves doctors with the options of radical surgery or radiation, should the cancer return. They don’t burn any bridges.”

Obtaining Medical Codes and Getting Payers to Reimburse for HIFU

While winning FDA clearance for our first and second generation HIFU devices was a 13-year, complex process and a huge accomplishment, our journey was far from over.  The next hurdle was obtaining medical codes to facilitate reimbursement from public and private payers, which can take up to four years. The pathway to reimbursement is where many companies fail because they don’t produce enough revenue following clearance to take them the rest of the way.

So as soon as FDA cleared our first HIFU device we proceeded with our reimbursement strategy.  First, we worked with the Centers for Medicare & Medicaid Services (CMS) to establish a temporary Healthcare Common Procedure Coding System (HCPCS) C-code. In that process, we had to educate Medicare administrative contractors (MACs) on the value of HIFU. The C-code, which took effect in July 2017, allows hospitals offering HIFU to submit a claim for Medicare patients although it does not include the urologist’s fee for the procedure, nor does it guarantee that the hospital or patient will be reimbursed.

And the C-code was only part of our reimbursement strategy.  In 2018, we also began working with the American Urological Association (AUA) and the American Association of Clinical Urologists (AACU) to submit an application to the AMA for a new Category 1 CPT code, specifically for ablation of malignant prostate tissue. So while we pursued clearance of Focal One, we also began a concurrent path toward securing the CPT code and reimbursement.

We brought in urologists from top medical universities that were using our device, as well as the AUA and the AACU's reimbursement committee representatives. We also worked with our competitor, SonaCare Medical, knowing that the AMA prefers to see competitors work together to develop the CPT code language.

Finally, in May 2019 we presented our case at the AMA CPT panel meeting and the following month the AMA accepted our application to establish the new Category 1 CPT code that will facilitate reimbursement for the HIFU procedure. The CPT code description selected by the panel is "ablation of malignant prostate tissue, transrectal, with high intensity focused ultrasound (HIFU) including ultrasound guidance."

The code will be included in the next CPT Codebook, effective Jan. 1, 2021. The CPT code will make it possible for men with localized prostate cancer who have the HIFU procedure to be reimbursed by their health insurer. By issuing a CPT code, the AMA is validating the clinical benefits of HIFU so it can take its rightful place as a standard procedure, alongside prostatectomy, radiation, cryotherapy, etc.