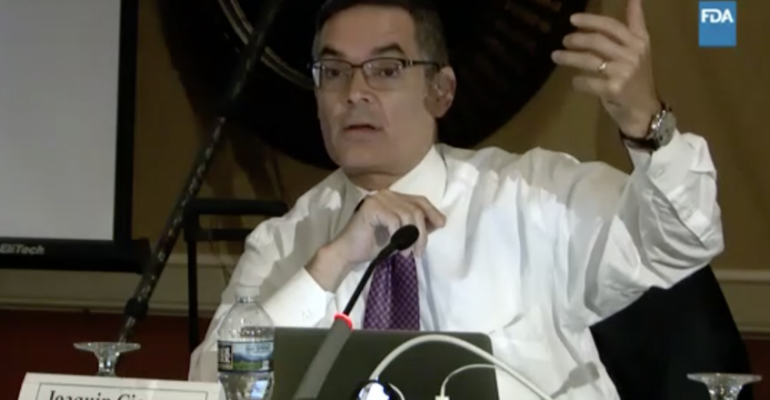 Joaquin Cigarroa, MD, associate chief of clinical cardiology at the Knight Cardiovascular Institute and a voting member of FDA's Circulatory System Devices Panel, talks about the signal associated with an increase in mortality through five years of paclitaxel-coated devices as compared to non-coated devices. "As we saw yesterday each of those histogram bars at five years, in the data that we have access to, with the recognition that that data is challenged ... the signal begins to occur between years three and five and so I think the models that we need to contemplate are different," Cigarroa said.
Becton, Dickinson and Company (BD) disclosed during its quarterly earnings call that FDA rejected the company's application to approve the Lutonix drug-coated balloon to treat patients with below-the-knee peripheral artery disease. Paclitaxel-coated balloons like Lutonix have been heavily scrutinized this year by the U.S. regulatory agency.

Drug-coated balloons and drug-eluting stents that use paclitaxel as the drug have been heavily scrutinized this year, which likely played a role in FDA's decision to reject  Becton, Dickinson and Company's (BD) Lutonix paclitaxel-coated balloon for below-the-knee (BTK) peripheral artery disease (PAD).

BD inherited the device through its $24-billion acquisition of C.R. Bard, a deal that closed at the tail end of 2017. FDA originally approved the Lutonix DCB in October 2014 for patients with above-the-knee PAD (the first FDA approval in the DCB category), and in 2017 the agency approved the balloon for end-stage renal disease patients with stenotic lesions in dialysis arteriovenous fistulae.

CEO Vince Forlenza said the company would continue to review collaboratively and align with FDA on the path forward regarding the submission, including the need to potentially provide additional data. The company had been expecting the submission to be approved in 2019, but that is no longer the case.

"We didn't expect the DCB situation," Forlenza said during the call, as transcribed by Seeking Alpha.

David Lewis, a Morgan Stanley analyst, asked if BD has made any decisions about the DCB commercial organization in terms of its size in relation to the opportunity, given the outcome of the FDA panel meeting and now the rejection of the BTK indication. The company's management declined to provide any details during the call but said that business sells "far more than DCBs."

"And we have seen your positive uptake in stents and other areas. So to begin to affect those, I think would be not a great move," said Simon Campion, president of BD's interventional business. "But obviously as part of this process, we have sought to offset as much of this as possible without impacting the commercial performance of the organization."

Next steps for the technology also depends on what action FDA ultimately decides to take regarding the paclitaxel device concerns and what labeling changes the agency might decide on.

"It remains a very active PMA, our teams are collaborating with FDA and we expect to have face-to-face meetings here with them in the not too distant future," Campion said.

Larry Biegelsen, a Wells Fargo Securities analyst, asked the management team about the current Lutonix indications and whether or not BD has noticed an impact on those sales since the FDA panel meeting.

"As you obviously know, the panel happened in June and I think the industry really did put the best foot forward here and in a collaborative nature," Campion told Biegelsen. "I think many of the main physicians that spoke were speaking on behalf of the role of paclitaxel, not only within PAD but also there is paclitaxel in other areas and [researchers are] not seeing a signal associated with that."

BD has taken a 50% hit on paclitaxel DCB sales as the paclitaxel debate has unfolded, and Campion said the company expects that to continue. The good news, he said, is that DCBs are only about 1% of the company's total business.