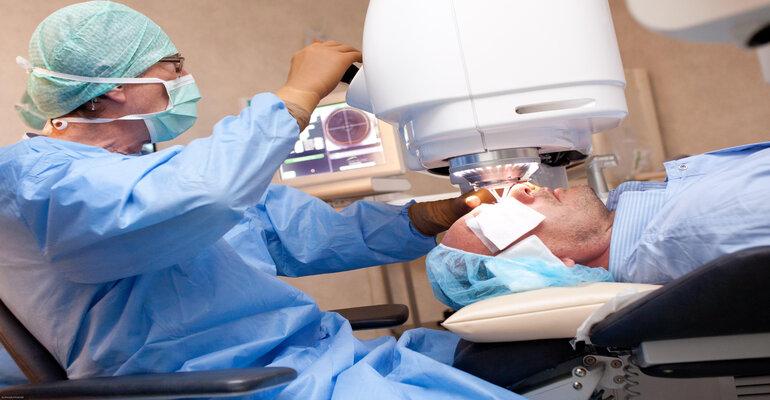 The FDA’s draft guidance on labeling recommendations for Lasik patients has many shouting regulatory overreach.

More than half a million adults undergo Laser-assisted in situ keratomileusis (Lasik) eye surgery every year and the procedure has been long known as one of the most performed, relatively safe, laser refractive surgeries to correct vision problems. Additionally, the surgery results in high rates of satisfaction (96% to 99%) with postoperative vision. During the surgery, a special type of cutting tool is used to precisely change the space of the cornea to improve vision, which normally takes less then 15-minutes per eye.

Recently, FDA published a draft guidance revealing concerns that some patients are not receiving or understanding information on the benefits and risks of these devices before undergoing procedures. Issued in July for comment, the guidance states that the administration has become aware of more potential adverse effects of Lasik treatment and recommended manufacturers update their labeling so that physicians and surgeons can discuss those risks and alternative treatments with patients. These risks involve postoperative double vision, difficulty driving at night and, rarely, persistent eye pain. FDA stated that the labeling recommendations are intended to enhance, but not replace, the physician-patient discussion and proposed a patient “decision checklist” that describes Lasik surgery, highlighting that the corneal tissue is “vaporized” during the procedure and corneal nerves “may not fully recover” from incisions, “resulting in dry eyes and/or chronic pain.” The draft guidance also reported that the cornea will never be as strong as it was pre-surgery.

However, many are seeing the proposed “decision checklist” as FDA interfering with the doctor-patient relationship. Organizations representing surgeons and medical devices say the administration is overstepping its regulatory authority and contradicting its long-established approach of not regulating the practice of medicine by intruding on the patient informed consent process which lies in the purview of physicians and their patients.

“The informed consent discussion has always been between the doctor and patient, which we think makes the most sense because the doctor can speak broadly to all of the treatments available,” the Medical Device Manufacturers Association (MDMA) wrote in a statement given to MD+DI. “More importantly, the doctor assimilates the preoperative workup to determine eligibility for a procedure and identifies any specific risks. The doctor engages the patient to understand their unique needs and concerns and is the only one equipped to ensure the patient understands and accepts the risks.”

MDMA submitted comment to FDA guidance stating that imposing these labeling requirements on the manufacturer would cause undue confusion in the informed consent process and that the discussion should be between the physician and patient.

“To bring the manufacturers into this doctor-patient discussion would add confusion to the process by which a patient makes an educated decision, particularly as manufacturers come from the perspective of the specific risks and benefits of their products only,” according to the association. “This would especially be true if each manufacturer were to develop its own labeling, as patients would potentially receive different information on the benefits and risks of Lasik from each manufacturer’s labeling and surgeons’ own informed consent forms.”

MDMA and other respected industry groups, including AdvaMed, the American Academy of Ophthalmology (AAO), and the American Society of Cataract and Refractive Surgery (ASCRS) state that the information for which the guidance is relaying on is out of date with current improvements to Lasik technology.

“Notably, the draft guidance relies on a panel meeting in 2008 and data from 2009 and does not cite any recent data, such as the Total Product Life Cycle, as the reason for its issuance Lasik has long-established safety and efficacy, which should be reflected in updated, balanced patient information,” MDMA wrote. “In order for patients to make an informed decision on their vision correction procedure, the guidance should be based on the most current data available and medical experts’ assessment of that data. FDA must ensure that the data used is current and the process for collecting that data is transparent to all stakeholders.”

Additionally, AAO stated that the general tone and balance of the document was focused on the risks and didn’t fully describe the safety and effectiveness of Lasik, citing multiple study’s showing highly positive outcomes and noting that the US military continues to be one of the largest providers of refractive surgery in the country.

“Studies have described the safety and effectiveness of Lasik in terms of night vision, night driving, flight performance, and firing performance,” wrote AAO, in a statement provided to MD+DI. “A 2021 study found that both wavefront-guided and wavefront-optimized Lasik provided excellent visual outcomes and were similar to prior reports performed in the military.”

ASCRS pointed to FDA’s own PROWL study that was published in the Journal of the American Medical Association Ophthalmology in 2017 as a key piece of relevant peer-reviewed literature that should have been included when drafting such a guidance, quoting the study in its statement to the Administration, “While most participants were satisfied, the rates of dissatisfaction with vision ranged from 1% (95% CI, 0%-4%) to 4% (95% CI, 2%-7%), and the rates of dissatisfaction with surgery ranged from 1% (95% CI, 0%-4%) to 2% (95% CI, 1%-5%).”

In a review of PROWL-1 and PROWL-2, which had an enrollment of 574, MDMA highlighted that a questionnaire was used to evaluate patient-reported visual symptoms post-Lasik procedure and came back with positive results.

AdvaMed, AAO, MDMA, ASCRS, among other organizations have urged FDA to withdraw its draft guidance and work closely with ophthalmic medical societies to gather the latest data on Lasik treatments and develop preferred practice pattern guidelines that can help with standard of care.

“We agree that it is in the best interest of patients that they be appropriately informed,” MDMA wrote. “However, the draft guidance does not achieve this goal and should be withdrawn. MDMA believes the best course of action is for the agency to continue working with the ophthalmic medical societies to communicate the benefits and risks of Lasik surgery.”