The Essure Death Reports in FDA's Database Are Confusing but Tragic 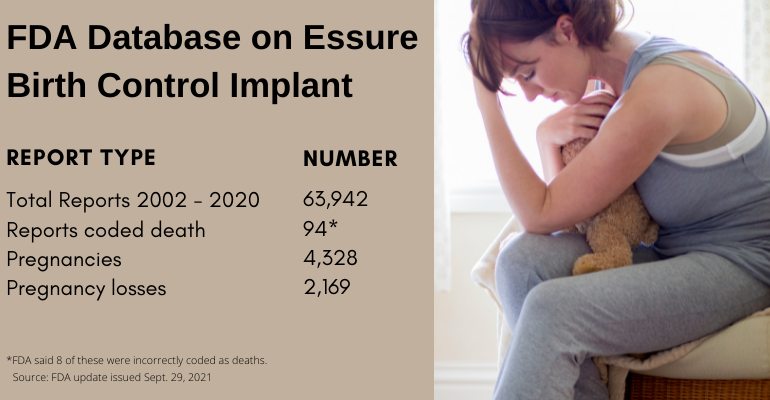 FDA has received 94 reports claiming to link the controversial birth control device to death, but how reliable are those reports?

FDA has received nearly 100 reports claiming a link between Bayer's now-discontinued Essure birth control implant and a death, the agency reported on Wednesday.

The problem is, not all of those reports are reliable. In fact, eight have already been determined to be incorrectly coded, dropping the number of total reports from 94 to 86. It's not until you start dissecting the remaining 86 reports, however, that it really gets confusing.

"It is difficult for the FDA to determine whether the device caused the death with only the information provided in the report," the agency said in its most recent update, issued September 29.

Broadening the scope, FDA recieved a total of 16,086 adverse event reports related to Essure just in 2020 alone. In 2019, the agency received 15,083 medical device reports related to the device, up from just 6,000 reports submitted in 2018, and the 11,854 reports FDA received in 2017. The nature and severity of the reports in 2020 remain consistent with prior years, the agency said.

"The FDA continues to evaluate other sources of postmarket data, including results from mandated postmarket studies, in addition to medical device reports to gather more information about device removals," the agency said.

The most frequent device problems reported about Essure were patient-device incompatibility/biocompatibility, such as a possible nickel allergy, or patient's anatomy related to failure (8,283), migration of the device or device component (5,311), device breakage/material fragmentation/fracture (2,704), dislodged or dislocated device (2,577), device operating differently than expected, for example, implant failure or pregnancy (1,058), malposition of the device (401), device difficult to remove (343), and device difficult to insert (335). Multiple device problems can also be listed in each report, FDA noted.

Thousands of women got the Essure implant, but got pregnant anyway