Colorectal Cancer Screening Pill to Be in US Pilot Study 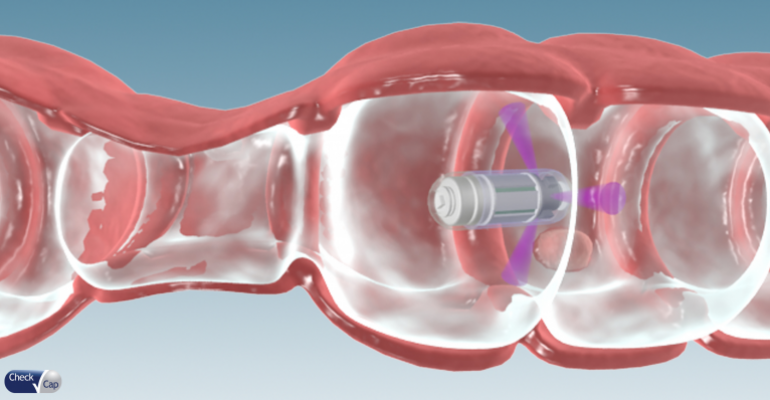 Check-Cap received CE mark for its C-Scan Capsule in January of this year, now the Isfiya, Israel-based company is setting its sights on the U.S. market.

Check-Cap is getting one step closer to having its capsule-based screening method for colorectal cancer on the U.S. market. The Isfiya, Israel-based company has received FDA conditional approval for an IDE to initiate a pilot study of the C-Scan capsule.

FDA’s conditional approval of the IDE requires Check-Cap to provide additional information to the agency and the company may begin enrolling patients immediately upon approval by the study site's Institutional Review Board (IRB). The trial will consist of up to 45 patients and it will be a single-arm study. Patients who are enrolled will be those considered to be of average risk for polyps and colon cancer. The study will also evaluate C-Scan’s safety, usability, and subject compliance.

Alex Ovadia, Check-Cap’s CEO said FDA’s conditional approval for an IDE is a significant milestone for the company.

“Following this conditional approval, we are applying for approval from the IRB and making sure we can start or initiate the pilot at NYU, which is our selected site,” Ovadia, told MD+DI.

Here’s how C-Scan works. After being swallowed in capsule form, the C-Scan system's ultra-low-dose X-ray technology is used to produce a 3-D map of a patient's colon. The system differs from capsule technology already on the market by eliminating the need for a bowel prep prior to ingestion and examining the colon in its natural state without distention.

The system produces a 3-D contour map of the colon that can be viewed in different ways to look for polyps, including a "tube" view a flat "fillet" view, or even the outside of the surface of the colon wall. There's other data from the system that may help clinicians detect polyps too, including Compton backscatter, X-ray fluorescence, and pressure data. If polyps are seen, a colonoscopy would likely be prescribed.

Early last year, Check-Cap began a clinical trial to obtain CE mark for C-Scan. The technology obtained regulatory approval in January of this year. The technology also has approval from the Israeli Ministry of Health. The company hasn’t launched C-Scan in these markets yet, but is working on the commercialization path, Ovadia said.

“Moving forward, I hope this is going to become a larger and more compelling method that could support screening for many people,” he said.