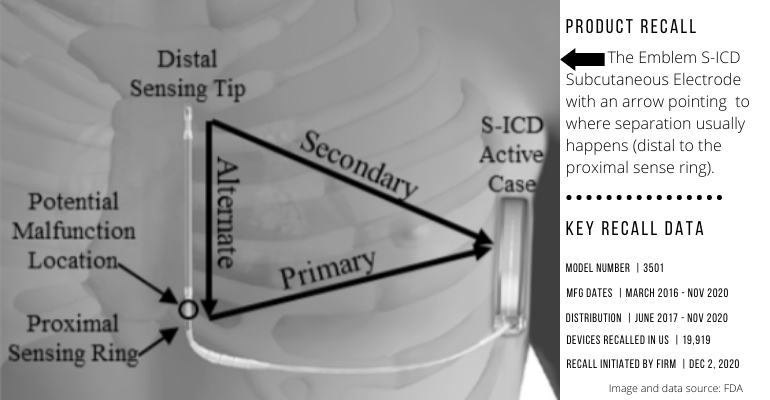 There have been 27 complaints about this device issue, 26 reports of serious injuries, and one death has been reported.

Boston Scientific is recalling the Emblem S-ICD Subcutaneous Electrode because of increased risk of fractures at a specific point (distal to the proximal sense ring), FDA reported this week. The company initiated the recall in December.

If the device fractures during use, it could become unable to deliver therapy to slow very fast heartbeats from cardiac arrest (tachycardia). A failed device may cause serious adverse events, the agency said. Examples include injury or death if cardiac arrest cannot be treated or need for additional surgery to replace failed devices.

So far, FDA said, there have been 27 complaints about this device issue and 26 reports of serious injuries associated with this recall. One death has also been reported.

The company reported strong safety and efficacy data on the Emblem S-ICD in 2019.

A tale of another Boston Scientific S-ICD safety issue

Back in 2017, Boston Scientific had to develop an S-ICD software update after a super rare malfunction caused a device-related patient death. In that incident, the patient died after the device repeatedly delivered an atypical amount of energy because a specific memory location was corrupted by radiation within the environment. This repeated atypical energy delivery prevented an arrhythmia detection and subsequent treatment, and ultimately contributed to the patient's death, the company said.

The probability of the same thing happening to another patient is 1 in 300,000 over five years, Boston Scientific determined after its investigation of the 2017 incident. Still, the company developed software updates for its Emblem S-ICDs and SQ-RX S-ICDs as a precaution. This problem cannot occur with any of the company's transvenous defibrillators or pacemakers because of hardware and software differences, Boston Scientific noted at the time.

Engineers were able to simulate the device behavior in a lab by corrupting two specific adjacent bits of device memory on similar model S-ICDs. The software update would mitigate the effects of memory corruption by preventing atypical energy delivery, Boston Scientific said.

The company said the memory corruption that happened in the reported case was due to a transient change of the device's operating state, caused by what engineers refer to as a single event upset (SEU). An SEU is a change of state in the device memory induced by environmental radiation interacting with a specific memory location.

All electronic devices that use integrated circuits are susceptible to SEUs, but implantable heart devices include mechanisms that are supposed to detect and correct memory corruption before it interferes with the device's function. This type of corruption can't always be detected though, especially if it impacts multiple bits in an area of memory that is expected to change as software performs device operations. That's what happened in this case, Boston Scientific said.

The company also noted that the patient had not been subjected to ionizing radiation therapy or any other readily identifiable external source of ionized particles prior to the incident.

Recommendations for physicians and patients impacted by the current recall

Boston Scientific has made the following recommendations to help physicians and patients evaluate the risks of using affected devices compared to replacing them.