Axonics CEO: We Refuse to Be Intimidated by Medtronic 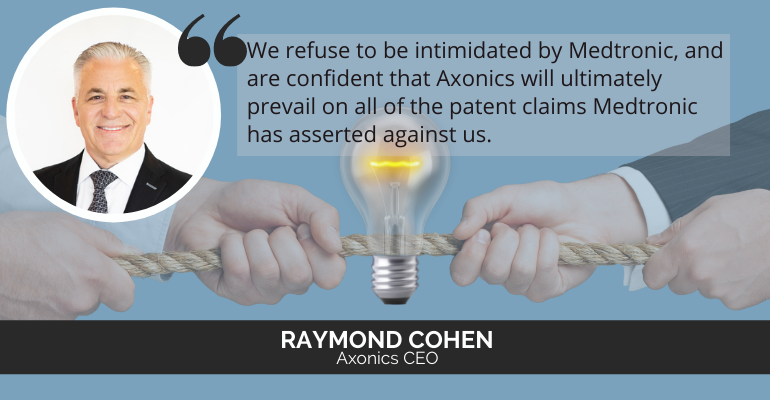 The ongoing war between Medtronic and Axonics is far from over, but the patent board has delivered its final decision.

The Patent Trial and Appeal Board (PTAB) of the U.S. Patent and Trademark Office has officially upheld most claims in the Medtronic patents that Axonics challenged, but this intellectual property feud is far from over.

Axonics plans to appeal the PTAB’s decisions on the claims it declined to invalidate to the Director of the Patent & Trademark Office and to the U.S. Court of Appeals for the Federal Circuit. The PTAB’s decision only relates to the issue of invalidity or patentability of the Medtronic patents and does not mean that Axonics infringes any of the patents.

Medtronic said it plans to ask the U.S. District Court in the Central District of California to lift the stay on the IP infringement case and resume proceedings. Axonics, however, said it expects the stay on legal proceedings to continue until the appeals process is complete.

"Medtronic appreciates the Patent Trial and Appeal Board's efforts in this matter," said Brett Wall, executive vice president and president of the neuroscience portfolio at Medtronic. "We are pleased with the outcome of the review process and look forward to our day in court to protect the proprietary technology that brings SNM therapy to patients around the world."

Last week, after the PTAB issued its decision regarding three of the six patents it reviewed in the case, the company referred to the upheld claims as a victory, which Axonics CEO Raymond Cohen took issue with.

“First and foremost, it is important to understand that the PTAB rulings as to whether the claims in the Medtronic patents are valid or not do not mean that anyone has ‘won’ anything. When one party suggests that another party is infringing, the other party often asks the PTAB to determine if the claims in the patents are actually valid. This is what Axonics has done, and for Medtronic to claim ‘victory’ is purely posturing," Cohen said.

"Moreover, we believe the PTAB’s narrow construction of the claims in the ‘758 patent and ‘148 patent strengthens our non-infringement argument. Axonics remains confident that it does not infringe any Medtronic patents – valid or invalid – and that we will ultimately prevail on the patent claims asserted against us," Cohen said.

"Medtronic took advantage of its monopoly and chose not to innovate for over 20 years. Axonics took a different path and, in effect, created a renaissance in SNM therapy by introducing significant enhancements such as a long-lived rechargeable implantable neurostimulator and making SNM devices MRI compatible for the first time. We refuse to be intimidated by Medtronic and are confident that Axonics will ultimately prevail on all of the patent claims Medtronic has asserted against us. In the meantime, we remain focused on fulfilling our mission of changing the lives of patients suffering from bladder and bowel dysfunction.”

If you haven't already been following this IP battle, here are the key points you need to know: