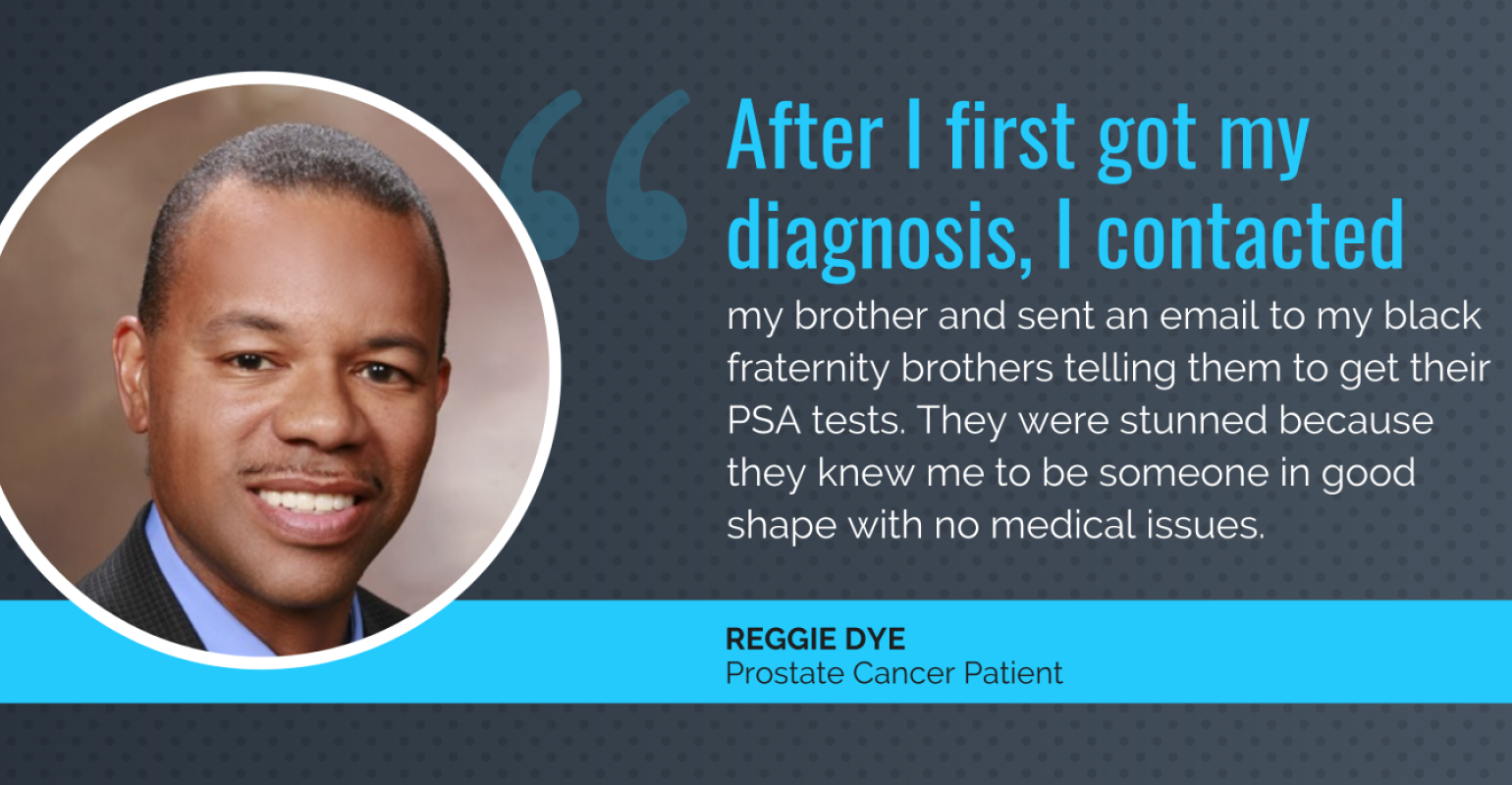 Graphic by Amanda Pedersen, headshot courtesy of Reggie Dye
Reggie Dye, a healthcare executive, chose to undergo high intensity focused ultrasound for prostate cancer treatment because the risks of undesirable side effects are much lower, and because he is aware that African-American men are twice as likely to die from prostate cancer than white men.

Three African-American men who have been successfully treated for prostate cancer with high intensity focused ultrasound met with members of Congress this week to share their stories and push a new legislation that could help U.S. patients gain easier access to breakthrough medical device procedures.

Reggie Dye went 15 years without seeing a physician, in part because he had always been incredibly healthy. He regularly does high-intensity workouts, enjoys hiking, golf, and can't remember the last time he even had a cold. But a preventative health evaluation incentive program his company offered in 2016 taught him that even the healthiest men are not immune to prostate cancer.

After two prostate-specific antigen (PSA) screening tests, followed by additional testing, Dye was diagnosed with localized prostate cancer. At first, he was given the choice of active surveillance, also known as "watchful waiting" or more aggressive treatment options such as radiation, cryotherapy, and surgery – all of which are associated with unpleasant side effects, including incontinence and impotence. Then he learned about high intensity focused ultrasound (HIFU).

Dye was a candidate for HIFU because he had a low-grade cancer that hand not spread outside the prostate gland. He found it to be an attractive treatment option because the risks of "those dreaded side effects" are much lower, he said, and because African-American men are twice as likely to die from prostate cancer than white men.

"After I first got my diagnosis, I contacted my brother and sent an email to my black fraternity brothers telling them to get their PSA tests," Dye said. "They were stunned because they knew me to be someone in good shape with no medical issues. I'm glad to say, they took my advice and got their checkups. One even invited a physician to speak to the men at his church about prostate cancer."

HIFU works by having  sound waves pass through the body and ablate diseased tissue. MRI imaging focused with biopsy data and image-guided ultrasound allow urologists to target only the diseased portion of the prostate and leave surrounding nerve structures intact – reducing the risk of unwanted side effects.

While HIFU presents an attractive option for men like Dye, not all candidates for HIFU can actually afford to go through with it because the procedure is not covered by private insurers and only partially reimbursed by the Centers for Medicare and Medicaid Services (CMS), and even then only for patients who are 65 or older.

Recently, Dye and two other African-American men who have been successfully treated for prostate cancer with HIFU met with members of Congress to share their stories and push a new legislation that could help HIFU and other novel medical technologies become more accessible for patients who can't afford to pay out of pocket. The proposed legislation, dubbed the New Opportunities for Value That Extends Lives (NOVEL) Act, aims to provide expedited reimbursement coding and provisional coverage for medical devices that have been approved via FDA's relatively new breakthrough device designation pathway, and modify current approval and reimbursement pathways.

"One of the big challenges that medical device manufacturers face is that gap between FDA approval and CMS coding coverage and reimbursement and this is the first legislation that we've really seen that addresses that gap," Holly Grosholz, manager of government relations at the Medical Imaging Technology Association, told MD+DI during a recent interview. "... We see this as a step in the right direction for innovative devices and future iterations of focused ultrasound ... anything that provides opportunities for innovative devices like focused ultrasound to be available and accessible to patients sooner is our priority."

Jessica Foley, chief scientific officer at the Focused Ultrasound Foundation, told MD+DI that focused ultrasound is currently being investigated for the treatment of over 130 different clinical applications, prostate cancer being one of them - and many other cancers - but also a lot of neurological disorders such as essential tremor and Parkinson's disease.

Before the development and FDA approval of HIFU, many urologists encouraged the watchful waiting approach because of how invasive other treatment options were. For some low-risk prostate cancer patients, that may still be the best course, and obviously not all men with prostate cancer are good candidates for HIFU, so treatment recommendations continue to be highly individualized.

"The alternative to watchful waiting now doesn't have to be a full-on major surgery, now it can be something much less invasive so I think that makes it much more appealing for patients," Foley said.