3M Is in Hot Water Again Over PFAS 'Forever Chemicals' 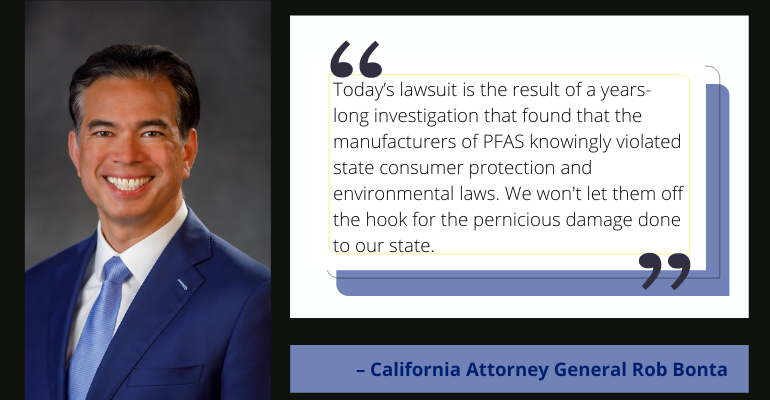 California is suing 3M over its use of toxic substances known as PFAS – and this isn't the first time the company has landed in legal trouble over these "forever chemicals."

It just hasn't been a good year for 3M.

Over the summer, the Saint Paul, MN-based company had to put its Aearo Technologies unit into bankruptcy to resolve a massive lawsuit problem involving veterans and the company's earplugs.

Meanwhile, 3M continues to defend its use of toxic substances such as perfluoroalkyl and polyfluoroalkyl substances (PFAS). The most recent PFAS lawsuit comes from California.

Bonta claims the chemicals are causing irreparable harm to the state's natural resources, and the manufacturers using them are engaging in a widespread campaign to deceive the public. The lawsuit names both 3M and DuPont, but DuPont claims it has been incorrectly named in the suit as it has never manufactured products with PFOA, PFAS, or firefighting foam.

In a statement, 3M Spokesperson Carolyn LaViolette said the company has “acted responsibly in connection with products containing PFAS and will defend its record of environmental stewardship.”

Bonta alleges that 3M and DuPont knew or should have known that PFAS are toxic and harmful to human health and the environment yet continued to produce them for mass use and concealed their harms from the public. As a result, these toxic "forever chemicals" are pervasive across California’s bays, lakes, streams, and rivers; in its fish, wildlife, and soil; and in the bloodstream of 98% of Californians, according to the lawsuit.

“PFAS are as ubiquitous in California as they are harmful,” Bonta said. “As a result of a decades-long campaign of deception, PFAS are in our waters, our clothing, our houses, and even our bodies. The damage caused by 3M, DuPont, and other manufacturers of PFAS is nothing short of staggering, and without drastic action, California will be dealing with the harms of these toxic chemicals for generations. Today’s lawsuit is the result of a years-long investigation that found that the manufacturers of PFAS knowingly violated state consumer protection and environmental laws. We won't let them off the hook for the pernicious damage done to our state.”

PFAS are widely used in consumer products including food packaging, cookware, clothing, carpets, shoes, fabrics, polishes, waxes, paints, and cleaning products, as well as in firefighting foams designed to quickly smother liquid fuel fires. These so-called "forever chemicals" are stable in the environment, resistant to degradation, persistent in soil, and known to leach into groundwater. PFOS, a PFAS chemical exclusively made by 3M beginning in the 1940s, was a component in firefighting foams used by the military, airports, refineries, and fire departments for decades before it was phased out in the early 2000s.

PFAS have been found in the blood of most Californians. Human exposure to PFAS can occur from contaminated air, water, soil, or food, and consumer products. Persons that work or live at or near military bases, airports, industrial facilities, and local fire departments, where firefighting foam has been used, are particularly likely to have been exposed to dangerous levels of PFAS contaminants. PFAS can cause adverse health impacts including developmental defects, liver, kidney, testicular, breast, pancreas, and prostate cancer, adverse pregnancy outcomes, infertility, reduced bone density in children, and impacts on the thyroid and immune system. Exposure to PFOA and PFOS was also found to limit the effectiveness of common vaccines across multiple studies, the lawsuit claims.

Benta alleges in the lawsuit that as early as the 1950s, 3M and DuPont began testing the physiological and toxicological properties of PFAS. Based on these internal studies, the manufacturers knew PFAS were toxic to humans and the environment. By the 1960s, the manufacturers had confirmed PFAS were leaching into groundwater and contaminating the environment, and by the 1970s, they had confirmed PFAS bioaccumulate in humans.

3M solutions that rely on PFAS include the company's Novec Engineered Fluids, 3M Fluorinert Electronic Liquids, 3M Performance Fluids, and fluoropolymer products. Of these, the Novec fluids are most relevant to the medical device industry, and the broader advanced manufacturing industry. 3M said its Novec fluids offer cleaning performance as well as a safer alternative for workers to other cleaning solvents used in key industries, including electronics, transportation, medical devices, and advanced manufacturing.

The company said it makes these products at select facilities worldwide using processes designed to help ensure the safety of 3M workers, and the communities where these facilities are located.

"We are committed to responsible operations and take steps to minimize our environmental impact through the use of state-of-the-art control technologies and continue to explore new and innovative means to uphold our commitment to environmental stewardship and sustainability," 3M noted.

3M has been quietly dealing with PFAS issues all year, while we were distracted by the company’s earplugs litigation

In September, 3M settled the Zimmerman et al lawsuit, a putative class action in Grand Rapids, MI. If the court approves the settlement, 3M and its co-defendant will collectively pay $54 million.

In August, 3M issued a press release commenting on action taken by the U.S. Environmental Protection Agency (EPA) regarding the manufacturing of PFOA and PFOS, which 3M phased out from manufacturing in the early 2000s. 3M said it has engaged in remediation at sites where it manufactured or disposed of these materials, and the company acknowledged that more can be undertaken by other entities.

3M said it wants to work with the EPA on the issue, but the company disagrees with the agency's proposed methods for dealing with PFOA and PFOS, which includes designating them as hazardous under the Comprehensive Environmental Response, Compensation, and Liability Act.

"EPA’s proposed designation of PFOA and PFOS as hazardous substances is unnecessary, inappropriate, and not based on the best available science," 3M said. "This action will not help promote timely or appropriate remediation of these materials and could in fact delay action."

The company said environmental agency leaders, industry groups, and others have voiced concerns about such a designation and sought to find alternatives that would achieve EPA's goal.

"There are better, faster, and more constructive ways to reduce exposure to PFOA and PFOS when and where appropriate, such as infrastructure upgrades, establishment of cleanup standards, use of existing EPA authority, and others," 3M said. "Many such measures are already underway."

In July, the Flemish Government and 3M Belgium reached an agreement under which 3M will invest more than €571 million to benefit the people of Flanders (northern portion of Belgium) and carry out certain previously agreed-upon PFAS-related remedial actions. This agreement cooperatively resolves ongoing disagreements between the Flemish Government and 3M, the company said.

In December 2021, 3M and the City of Guin Water Works and Sewer Board (GWWSB) in Guin, AL reached an agreement to address the presence of PFAS in the Guin area. 3M agreed to contribute to the construction of a new drinking water treatment plant designed to increase capacity and employ new technology to provide treatment to drinking water supplied to GWWSB’s customers, as well as a new wastewater treatment facility.

The California lawsuit seeks injunctive relief, damages, penalties, restitution, and abatement. Requested relief includes statewide treatment and destruction of PFAS, including, but not limited to, the treatment of drinking water by regulated water systems; water drawn from private wells and unregulated systems used for drinking water and irrigation; and water from other wastewater treatment plants and systems. The lawsuit also seeks payment of funds necessary to mitigate the impacts to human health and the environment through environmental testing, medical monitoring, public noticing, replacement water (for period between testing and installation of treatment), and safe disposal and destruction.