Home>Product Development>R&D
Recent
A New Contender in the Diabetes Market
May 06, 2021
'Adversity Can Give Us the Hidden Gift of True Purpose'
May 05, 2021
Is 'Strategic Discrimination' Happening in Medtech?
May 05, 2021
Protecting Hearing Aids Electronics with Parylene Conformal Coatings
May 05, 2021

Courtesy of Massachusetts Institute of Technology 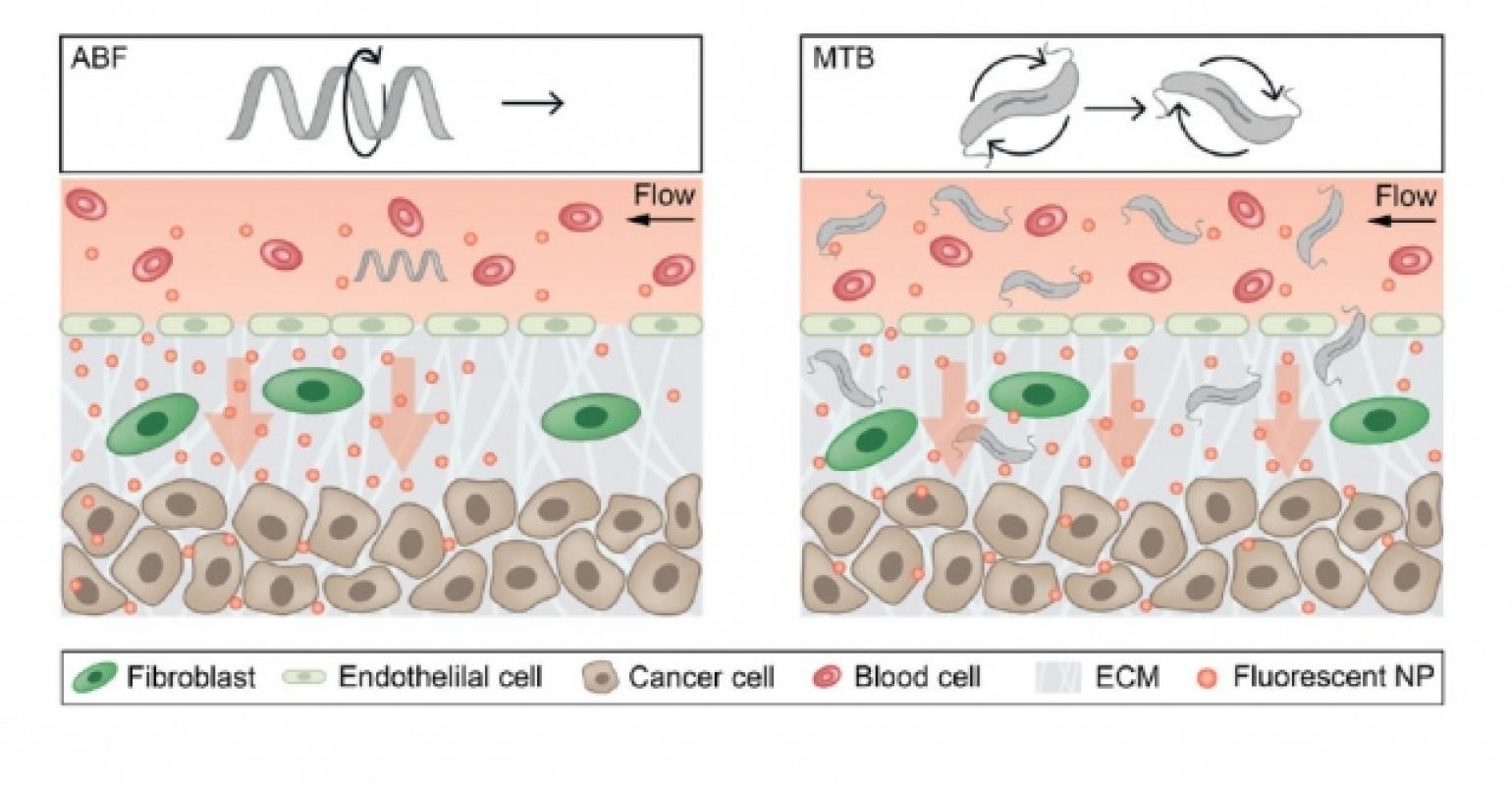 Microrobots positioned in a microfluidic environment enhanced the flow of payload-carrying nanoparticles toward targets outside the channels of the flow.
Recent research highlights a wide range of emerging uses for nanoscale robots in tackling some of the toughest issues in medicine.

New research papers published nearly coincidentally highlight a wide range of emerging uses for nanoscale robots in tackling some of the most vexing problems in medicine, and also might offer clues to common methods of controlling the tiny devices.

One of the experiments,conducted at the Massachusetts Institute of Technology (MIT), explored using a microrobot to facilitate precision delivery of drugs to tumor sites. The other,conducted at the University of Pennsylvania, targets hard-to-dislodge biofilms on a wide variety of surfaces, from human teeth to catheters, water lines, and pipes.

Simone Schürle, an assistant professor for responsive biomedical systems at the Swiss Federal Institute of Technology in Zurich, was the lead author of the MIT paper; she said the field is simultaneously exploring numerous implementations while coalescing on some common principles, such as creating some sort of standard design for magnetic control of the devices.

"We all have to obey the same laws of physics, so it is very likely there is a standard design that could come up," Schürle said. She also said the angle the Penn researchers are working on illustrates the wide variety of roles these microrobots might someday be able to fulfill.

"I find it's a really cool application [the Penn Researchers] came up with," she said. "Something I never would have thought about, because I am really driven by the challenges the medical community is facing in areas such as cancer therapy."

The Penn research is a serendipitous product of existing projects from the university's dental and engineering schools: led by Hyun (Michel) Koo of the dental school and Edward Steager from the engineering school, the project demonstrated two configurations of robots that successfully attacked biofilms catalytically. One design suspends iron-oxide nanoparticles in a solution and is steered magnetically to remove biofilms on a surface like a plow. The second platform embeds the nanoparticles into gel molds in three-dimensional shapes. These were used to target and destroy biofilms clogging enclosed tubes. The researchers found the devices effectively degraded and removed biofilms on flat and tubed glass surfaces as well as from both the surface of teeth and the narrow corridor between root canals.

Steager and Koo said the robots' effectiveness, versatility, and cost-effective design have stimulated interest from other academic labs as well as industry. For example, Koo said, while the cleaning product associated with the robots can be any of several materials, cheap and abundant hydrogen peroxide works very well.

"Those things are important in terms of applicability," he said. "Our goal, aside from showing proof of principle, is to push this toward product development, and it's important to have things that can be easily acquired."

Steager said, "one of the big contributions of this paper is just saying this is an appropriate application space for robotics. We can have some precision and there isn't a high bar as far as FDA approval – the mouth is different from the bloodstream, for instance. Or even with biofilms on an industrial pipe or catheter, it's not an in vivo application. So, I think it will spur more research from other labs because there is a lot of opportunity to apply robots to biological systems without the restrictions or requirements of something like FDA approval."

Another aspect of the Penn work that may see some applicability elsewhere is the magnetic control technique of the nanoparticles.

"I think magnetism will be the primary method of moving nanoparticles for the foreseeable future," Steager said. "One of the big challenges with controlling a microrobot is having some kind of line-of-sight access and with magnetism we don't have to worry about that – magnetic fields will penetrate most materials, and you have much higher magnetic fields in an MRI than in either of these works."

Enhancing convection to a tiny target

The MIT work's microrobots weren’t used as end point instruments as the Penn robots were, but rather as devices to enhance the flow of payload-bearing particles to targets such as cancer cells.

Schürle, who led the study while a post-doctoral researcher at Sangeeta Bhatia's lab at MIT, said nanotherapy's extremely low rate of efficiency – about 1% delivery to target, as cited by a 2016 study – serves as a benchmark for researchers trying to improve treatment.

Much of nanoscale drug delivery is targeted through "leaky" blood vessels near tumors, but the low efficiency rates have proven frustrating. Schürle said the group's experiment focused on improving the convective flow through an artificial microfluidic system, in which two configurations of robots – one a single artificial helical robot and the other a collection of naturally magnetotactic bacteria – did not try to drag the payload along, but rather provided an environment that increased convective flow around them and toward the target opening in the constructed blood vessel. For example, the artificial robot, called an artificial bacterial flagellum (ABF), works by being magnetically manipulated to swim upstream or remain stationary while the payload-delivering fluid flows around it at a higher rate than the flow would be without the presence of the device.

While substantial work still needs to be done to prepare either approach for in vivo analysis, Schürle said one example in which the single ABF approach might work well would be as an integrated component in an appliance such as a stent, where it could trigger drug release and enhance penetration counteracting inflammation on demand. The bacterial approach, she said, would be advantageous in applications where precise device orientation is not a concern as it is with the ABF: "They naturally accumulate at the tumor site because of chemotaxis, and as long as you know where you want to activate, you can just propel them without caring about the orientation."

Given the positive results of both the MIT and Penn experiments, Schürle said optimism and determination are abiding sentiments in the research community.

"Nothing is impossible and we all work on different angles," she said. "It would be stupid not to work on one technique because you say the rest of the field is not far enough along, because we are really moving rapidly."