The ultrasound treatment brought a 25-year-old brain injury patient back to full consciousness. 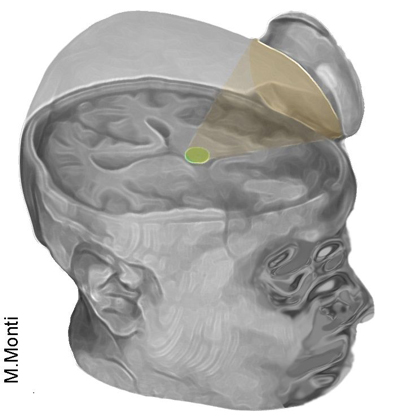 A new study out of UCLA has shown promise with ultrasound techniques that use sonic stimulation to excite the neurons in the brain's central core for processing information, known as the thalamus. The procedure, known as low-intensity focused ultrasound pulsation, has potential as a therapy to help coma patients awake from comas and recover from serious brain trauma.

The researchers created a device about the size of a tea cup saucer that can create a small sphere of acoustic energy targetting different regions of the brain to stimulate brain tissue. In their latest study, the device was used to help a 25-year-old patient recover from a traumatic brain injury. Researchers say that the technique could eventually be transitioned into a portable device like a helmet to provide a cost effective treatment that could be used to "wake up" patients into a more conscious state.

Before the ultrasound treatment, the 25 year-old patient had shown minimal signs of consciousness and could only perform the smallest movements when asked. After one day of treatment with the new ultrasound technique his responses showed significant improvement, and after three days of treatment the patient had gained full consciousness and language comprehension. Eventually he was able to communicate through head nods and even make a fist bump gesture to one of his doctors.

However, these emerging new diagnostic methods are only half the battle as researchers continue to explore new and innovative therapeutic solutions that can actually treat traumatic brain injury. This new technique aims to be the first to explore the use of ultrasound techniques to target and treat specific areas of the brain that have experienced trauma non-invasively--specifically the thalamus, an area of the brain that usually experiences significant impairment following a coma or serious brain injury.

Given that there aren't many recognized treatment options for patients in a coma or vegetative state, UCLA researchers remain hopeful that this new technique could have a significant impact on patients who are left with few other alternatives. The ultrasound device only emits a small amount of energy, so the technology is extremely safe for human trials, and also provides a non-invasive approach to therapy.

Following their most recent results with the 25 year-old patient, UCLA researchers plan to begin testing the procedure on more individuals this fall at the Ronald Reagan Medical Center in Los Angeles. The group hopes to learn more about the effects of the device, and fine tune its ability to target specific areas of the brain once they're able to gather more data from additional patient responses.