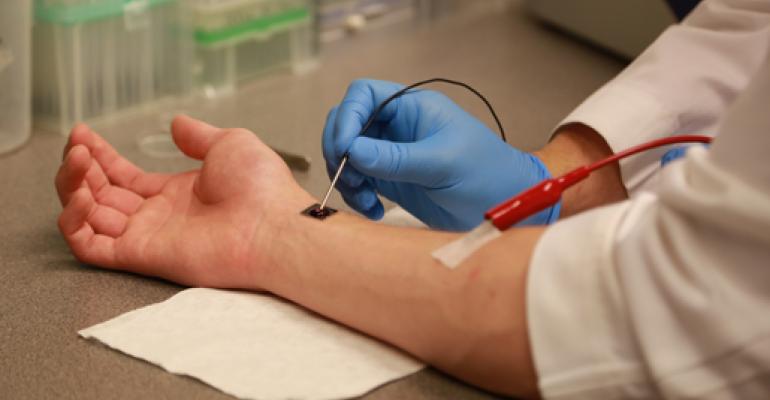 The research has implications for people with diabetes-induced ischemia and stroke.

Researchers have developed tissue nanotransfection, a process for regrowing tissue inside the human body.

Researchers at Ohio State University have developed breakthrough stem cell technology that can regrow tissue inside the human body, rather than in a laboratory.

Their work has implications for critical limb ischemia, brain disorders, and possibly even organ engineering and bone regrowth, according to Chandan Sen, PhD, director of the Center for Regenerative Medicine and Cell-Based Therapies at Ohio State's Wexner Medical Center in Columbus. Sen led the team that developed the technology.

Here's how the process, known as nanotransfection, works: The scientists make synthetic RNA and DNA to match that of the patient. They load it into nanochannels inside tiny needles embedded in a chip and apply the chip to the skin. The needles electrocute about 2% of the cell surface with the patient's nucleic acid. The procedure takes 1/10th of a second, and has been shown to work with up to 98% efficiency.

In experiments on mice, the technology restored blood flow to injured legs by reprogramming the animals' skin cells to become vascular cells. With no other form of treatment, active blood vessels had formed within two weeks, and by the third week, blood flow returned and the legs of the mice were saved.

The researchers also induced strokes in mice and used the chips to grow new brain tissue from the animals' skin and transplant it to their brains. Bodily function damaged by the strokes was restored. The study of the technique, which worked with up to 98% efficiency, was reported in the journal Nature Nanotechnology.

The technology marks an advance over cell regeneration conducted in a laboratory, because those cells mostly underperform or die once transplanted into the body, according to Sen. The researchers use skin cells in their work because, as Sen explained, everybody has some to spare.

"We grow it in you and we move it over to the organ so you have your own cells populating your organ," he said. "It's all coming from you."

The synthetic RNA and DNA reprogram cells in the same way that fetal cells develop different functions to become different body parts, Sen added. The researchers worked on the technology for more than four years, also conducting successful blood flow restoration experiments on pigs. When they begin human trials, their first patients will likely be those whose critical limb ischemic has reached the stage where amputation is the only option.

The scientists' work has generated interest in Europe, Asia, the Middle East, and in the United States. Ohio State will decide where to pursue human trials first, and is searching for industry partners.

Sen and his team acknowledge that their work will be met with skepticism.

"Whenever you do something that is sort of transformative, you will expect that," Sen said. "Therefore, we actually published this in the most rigorous journal possible. We went through 16 months of criticism and response, after which this was published."