HomeProduct DevelopmentR&DMIT Team Develops Joystick-operated Robotic Stroke Surgery
Recent
Product Development
J&J MedTech Lands Clearance for INHANCE Shoulder System
May 19, 2022
The Robot Will Do Your Angioplasty Now
May 18, 2022
XACT Is Changing the Tone of Robotics in Healthcare
May 18, 2022
Medtronic Touts Cusp Overlap Technique in TAVR
May 18, 2022 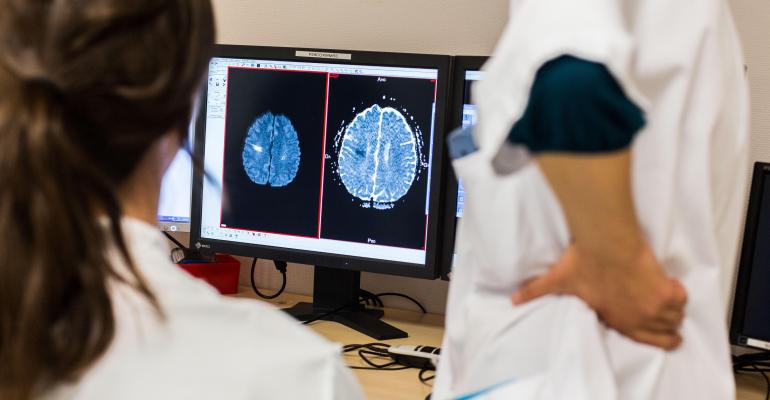 The new system could expand access to neurovascular surgeons through remote-operated robotics.

After a stroke time is of the essence, with a window of about an hour to avoid significant impairment. But few facilities around the country can surgically address stroke or aneurysm symptoms within that timeframe, or with a surgeon adept at the procedure. MIT researchers have developed a system that could expand access to neurovascular surgeons through remote-operated robotics. The system achieves this with a joystick that moves the arm of a robotic surgical system.

Treating stroke or aneurysm patients quickly – within what is referred to as the “golden hour” – is critical, however travel in rural regions or finding an appropriate clinician can tick that time away. With the system created by engineers at MIT, small and remote facilities could have access to stroke experts. The system itself consists of a live imaging interface, robotic arm, and joystick. The robotic arm is controlled with magnets which are attached at the wrist and used to remotely manipulate the device.

On the opposite end of a live video feed, a neurovascular surgeon would remotely manage the robotic arm and complete the procedural intervention to clear the clot that is blocking the vessel. Surgeons generally achieve this by guiding wires into the vasculature and when reaching the blocked area, they either manually clear the clot or apply therapeutics to break up the clot.

With a relatively short training session of about an hour, neurosurgeons were able to use the joystick-guided robotic arm to reach target areas. The MIT team, led by Xuanhe Zhao, professor of mechanical engineering and of civil and environmental engineering, tested this approach on a vasculature model that was clear.

While robotic systems are helpful in assisting surgeries, the intricate movements needed for delicate procedures such as treating stroke require a human touch. This is where the joystick and magnetic guidance comes into play, as it transfers the expertise of the surgeon to the robotic arm.

Based on earlier MIT research that found magnets could provide a high degree of control, the team attached magnets to the robotic surgery arm. Each magnet is also attached to magnetic wires which can carry a movement. Together, the system can simulate natural human movements like tilting and moving backward and forward.

The research was partly funded by the National Science Foundation, the National Institutes of Health, and Phillips Research of North America.