10 Nanotech Breakthroughs You Should Know About (Updated) 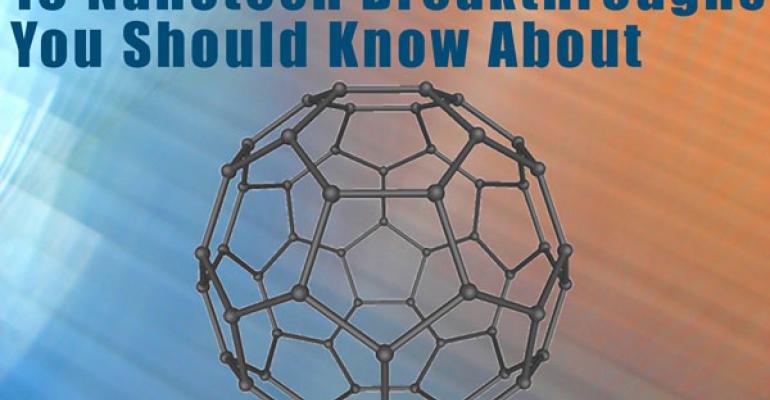 Nanotechnology has been hailed as the next big thing for decades, but it is only now that it is truly becoming a reality in the medical device space.

The term nanotechnology itself dates back to the 1980s when it was coined by U.S. engineer Eric Drexler. In the past few decades, nanotech has found a steadily growing number of applications in everything from computing to textiles. It remains to be seen to what extent nanotechnology will reshape medicine, but nanotech advances are continually being announced.

We asked Roger Narayan, PhD, professor at the University of North Carolina/North Carolina State University Joint Department of Biomedical Engineering (Chapel Hill and Raleigh, respectively), about what areas he and his team have been examining, to get a preview of what the next crop of graduates might bring to the party. We also spoke with Chris Folk, principal engineer, Device Strategy Group at Amgen Inc. (Thousand Oaks, CA), to get his take on some other areas that bear watching.

"We have looked at using atomic layer deposition to grow films of titanium oxide and zinc oxide in a conformal manner on nanostructured surfaces for use in medical devices. In addition, we have used chemical vapor deposition to grow a hard carbon material known as ultrananocrystalline diamond on nanostructured surfaces." Narayan said. "This is also for use in medical devices. We are examining the processing of many types of medical devices, including microneedles, both for drug delivery and for biosensing."

"I find this to be a very interesting time. In terms of medical nanotechnology there are changes happening," Folk said. "In terms of drug delivery, there are new platforms being built. Generally, there are new ways of interacting with the body. There are a lot of challenges right now. I think there are more opportunities for innovation and more positive inertia in creative thinking than we've seen in a while, so I'm excited."

"I look at the devices themselves," Folk said. "Many of them are getting smaller. There are a bunch of different ways that nanotechnology is being involved. There's a lot going on in terms of wearables, and in the cardiovascular and diagnostics spaces."

Here are 10 recent advances that could be commercialized in the relatively near future.