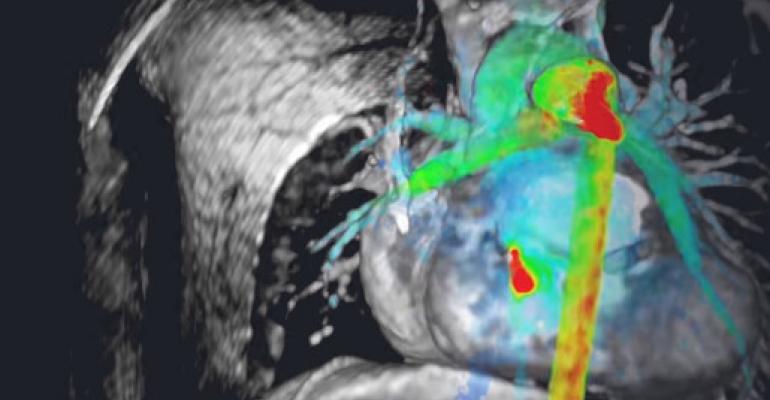 A California startup aiming to transform the world of medical imaging has forged a partnership with GE Heathcare by which doctors reading cardiac MRIs will now be able to see and quantify blood flow.

The company - Arterys - claims that its cloud-based software as a service platform is the first technology to visualize and accurately measure blood flow in the body using any MRI. The launch of the technology occurred at the recently concluded annual meeting of the Radiological Society of North America in Chicago, and the first application is in the cardiovascular space. Arterys uses 4D Flow MRI that allows doctors to measure and see the "temporal evolution of complex blood flow patterns within an acquired 3D volume."

The Arterys System provides seven-dimensional data — three is space, three in velocity direction and one in time — and was launched as part of GE Healthcare's ViosWorks. It is a new and novel cardiac solution that reduces the time it takes for a conventional cardiac scan significantly. Once commercially available, ViosWorks will provide "3D cardiac anatomy, function, and flow in one free-breathing, 10-minute scan with cloud-based, real-time processing of images at resolutions previously unattainable," according to a news release from Arterys Monday.

"With cardiovascular disease as the leading cause of death in the world, we believe that this cloud-enabled technology will help us to provide value not only for clinicians by delivering advanced visualization and quantification of cardiovascular function, but also help simplify cardiovascular examinations and address significant patient needs in cardiovascular disease," said Ioannis Panagiotelis, chief marketing officer, Global MR at GE Healthcare, in the release.

In November, GE Healthcare announced that future GE MRI machines would incorporate the software platform from Arterys, which is FDA cleared and has CE Mark, but did not disclose the terms of the agreement. Arterys also announced the completion of a $7 million fundraising round from investors such as Norwich Ventures, AME Cloud Ventures, Morado Ventures and Asset Management Ventures. The San Francisco startup was previously known as Morpheus Medical.

The real-time analysis of the MRI data is based upon both machine learning and Big Data. The hope is that by quickly and accurately measuring blood flow in the heart, cardiologists would be able to make quick diagnostic decisions about the status of a patient. This would make the management of heart disease patients simpler.

Here is a video of the blood flow visualization that is available using the Arterys system, compared against the standard echocardiogram which can visualize blood flow but not measure it.