Scout Marks the Spot in Soft Tissue for Cancer Treatment 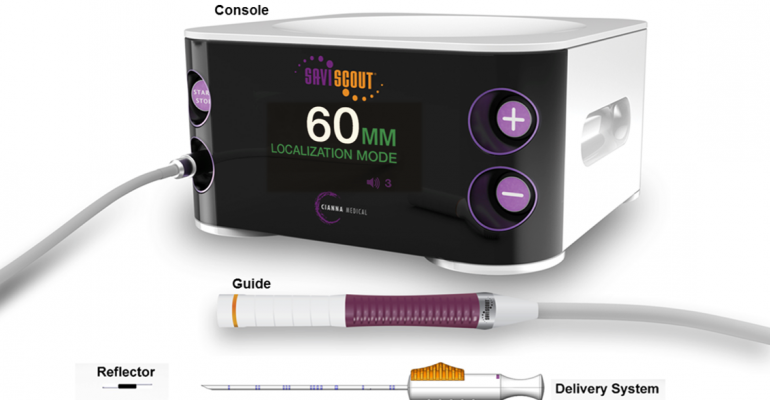 FDA extended the indication for Cianna Medical's Scout reflector, allowing the device to be used to mark soft tissue sites including lymph nodes.

Cianna Medical celebrated another regulatory milestone this week after FDA cleared its Scout reflector for an extended indication, allowing the tiny device to be used to mark soft tissue sites, including lymph nodes.

The non-radioactive wire-free localization device is smaller than a grain of rice (4mm) and won the gold award in the 2017 Medical Device Excellence Awards for the category of ER and OR tools, equipment, and supplies. Last year FDA cleared the device for implantation in breast cancer patients without restrictions on the length of time that it can remain in the breast. The reflector is completely passive until activated by a handpiece, which acts as the radar system, at the time of the procedure to locate the reflector.

"The first FDA clearance for Scout was really about using it to target and remove breast tissue, so that would essentially be the tumor and the area surrounding the tumor," Jill Anderson, president and CEO of Cianna Medical, told MD+DI. "When we take care of women who have a diagnosis of breast cancer, sometimes they have a suspicious lymph node ... this indication expansion allows the physicians to use this to remove those lymph nodes."

It also means that if the physician chooses to biopsy the node first, before removing it, they can leave the Scout reflector behind in a single procedure. Then, if they later decide the node needs to be removed, the patient doesn't have to go through a second localizing procedure because the reflector is already in place, Anderson said.

"Being able to expand the use of Scout into all soft tissue is a nice milestone," Anderson said. "It allow doctors to use this to localize the tumor or lymph node anywhere in the body, anywhere in soft tissue ... that allows us to expand outside of breast cancer into other cancers where it's important to be able to locate with precision and accuracy the tumor and to spare how much tissue you're taking out when you remove that tumor."

Some areas that come to mind would be colorectal cancers, melanomas, and even lung cancer.

"Scout is broadly relevant in any surgery where we need to remove tissue and removing less is important," Anderson said.

The Scout System has been in use for wire-free breast tumor localization since 2016 and has been evaluated in more than 42,000 procedures in more than 325 U.S. medical centers, according to the Aliso Viejo, CA-based company.

Cianna Medical also noted that the device does not have a clinically significant MRI artifact so it does not interfere with MRI studies and there is no restriction on the imaging modalities that can be used throughout a patient's treatment while the implant is in place.

Beyond the technology, Cianna Medical has a program designed to provide financial assistance for uninsured patients and multi-modality training for radiologists, surgeons, and allied health professionals, the company said.