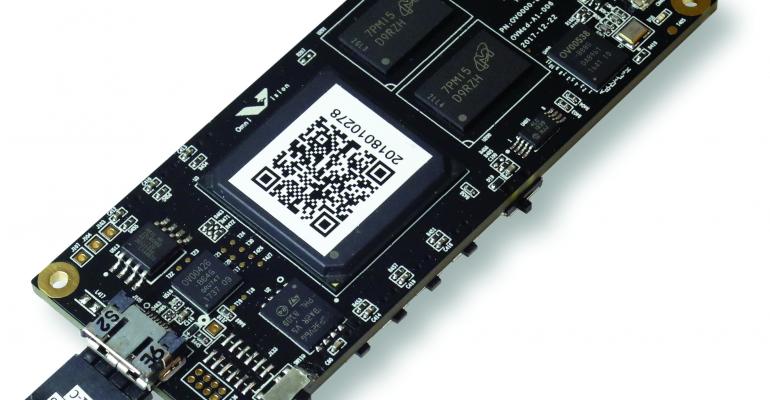 Tazeeb Gunja holds up a case containing a dot the size of a period at OmniVision’s booth during MD&M East. This “dot” is a highly functional imaging technology created by OmniVision to be used in medical devices.

“We plan to make some even smaller,” Gunja, who serves as principal market and development manager at OmniVision.

The Santa Clara, CA-based company had a full display at MD&M East, showcasing its technology as it seeks to increase its market share in the medical device industry. The company, which was founded in 1995, revealed two new partnerships that could help give it a stronger push into the medtech market.

Gunja noted that when compared to some other industries OmniVision serves – healthcare is slightly behind in adopting technology. Gunja is echoing a similar sentiment that MD+DI has heard throughout the years.

In its first collaboration, OmniVision is teaming up with BioVision for a Turnkey Medical CMOS Camera Platform for a disposable in-office endoscopy.

In-office endoscopy and catheterization are becoming more popular as the healthcare industry trends toward point-of-care diagnosis and treatment to reduce costly and delayed hospital visits. This trend, in turn, is driving the need for low-cost, high-quality imaging, as well as the ease of use and time savings of disposable handhelds, which do not require cleaning between patients. The firm’s second partnership is with Myriad Fiber for an endoscopic surgery tool prototype with an integrated camera.This reference design retrofits off-the-shelf endoscopic forceps with OmniVision's ultra-compact OVM6948 CameraCubeChip camera module with built-in wafer-level optics. The concept is also ready to be implemented in a wide variety of other surgical tools, including scissors, suction devices, pliers and clippers.

The company said this new prototype solves a real problem that surgeons face when performing endoscopic procedures. The CMOS camera at the distal tip of today's standard endoscopes is spatially offset and set behind the working channel through which the endoscopic surgery tool is passed. Setting up the camera as such can obstruct the surgeon's view of the target region, provide an image with a shadow or even provide a misleading view of the tool. This lengthens the time required for surgery, causes more patient discomfort and complications, and creates the risk of an incomplete therapeutic procedure. In this prototype, the OVM6948 is incorporated directly into the tool, resolving the above-mentioned imaging issues encountered in more traditional setups.

The company said these partnerships were part of its plan to have a growing presence in the rapidly-changing healthcare industry.

“We truly believe that medicine is changing,” Gunja said. “We believe we are in many ways transforming this business, along with our partners and our customers It’s an exciting time and we’re very happy to be a part of that renaissance of medicine.”