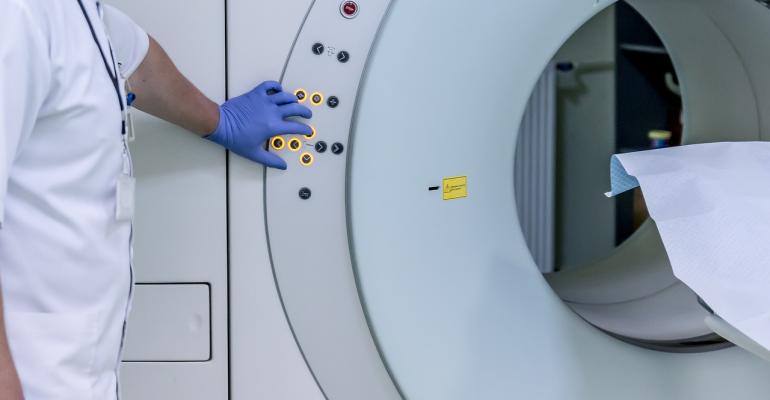 Hospitals are looking for more ways to maximize the value of their imaging purchases, and manufacturers are looking for new ways to meet shifting customer demands.
The shift toward value-based care has changed the radiology game for both the providers and the companies making new imaging technology.

At the end of 2016, MD+DI an industry report correctly predicted that value-based care was here to stay. Fast-forward two years and we're beginning to see hard evidence that the industry is not only accepting this shift but some medtech companies have even learned to embrace it.

One area of the healthcare system where value-based care has had the most apparent impact is radiology. Of course, other trends have fed into this as well, such as precision medicine and population health management. MD+DI recently spoke with experts on both sides of the table to find out just how much these trends have impacted purchasing decisions from the perspectives of both the provider and the vendor.

Here are the key takeaways from these conversations and how the biggest trends in imaging could ultimately impact the healthcare system at large.

It's About More Than Just Bells and Whistles

Going back 15-20 years ago, there was a constant technology race in the marketplace where each provider wanted to be the first to install the next best machine, said Karim Boussebaa, senior vice president and general manager of CT and AMI for Philips. Back then, he said, it was all about getting the fastest machine, the best image quality, the highest number of slices, etc.

"A lot of that, you could argue, was driven by the fact that the modality was in constant growth, the technology limits were far from being achieved ..." Boussebaa told MD+DI. "Over time, maybe more so over the last five years, there's been a shift in the marketplace which is now not only are we interested in diagnosing the right disease in our patient but it's also important that we do it in the most effective and the most efficient way."

What has occurred in recent years is that healthcare costs have continued to rise and hospital margins have continued to shrink so the justification for expenditures has become much more scrutinized, said Samir Patel, MD, value management program director at Radiology, Inc. in North Central Indiana, and a member of the American College of Radiology's Council Steering Committee.

"As people are looking to purchase new pieces of equipment it is no longer just about the latest and greatest, but it is going to be more focused," Patel told MD+DI.

Hospitals and healthcare systems are approaching purchasing decisions from the standpoint of how a new piece of equipment ties in with the organization's strategic goals and whether or not the equipment will impact other specialty areas beyond radiology.

Both Patel and Boussebaa talked about the role of the quadruple aim: improved patient outcomes, reducing costs, improving the patient experience, and improving the well being and experience of the healthcare provider.

"Because if the studies were never appropriate or if the outcomes were never great," he said, "what's the value of that piece of equipment other than producing this charge?"

As for physician well being and population health, Patel offered two examples that he's seen in local practice. The first example was a decision about whether or not to purchase a digital breast tomosynthesis machine for mammograms. The decision makers had to ask themselves if they were buying a digital breast tomosynthesis just because the competition was offering it, which, in the past, may have been reason enough.

But in today's healthcare environment the more important considerations were things like whether or not the new technology would reduce the organization's call-back rate for mammograms, and if so what impact that would have on the organization. Also, would the technology enable the organization to detect more cancers and if so, does the organization have the proper support to treat those cancers in an efficient way? In other words, are there enough oncologists and surgeons to ensure that the patients would be treated in a timely fashion?

Another example Patel shared involved the decision to purchase an artificial intelligence-based system for coronary CTA to calculate fractional flow reserve. The technology is much faster than performing traditional stress testing, he noted, so there was an efficiency component to purchasing the device. Also, the technology enabled the detection of significant disease that might have been missed previously. And finally, the technology enabled the organization to reduce the number of patients referred to the cath lab unnecessarily, meaning that one purchase impacted both the radiology department and the cath lab.

"Those are things that we're looking at today that we may not have necessarily looked at in the past," Patel said.

"Here's a perfect example of something we did several years ago," Patel said. "The hospital was looking at purchasing four CT scanners. Three were going to be replacements and one was going to be new."

If the hospital wanted to purchase the latest and greatest 128-slice or 64-slice dual-source CT scanners that would have made for an expensive purchase.

"So what we did was say 'okay, where are these scanners going to go? What is the demand for the types of studies? And can we address the supply-demand relationship with a lower cost solution?'" he said. "So what we ended up doing – and this was over five years ago –  is we purchased not four 64-slice CT scanners, but we purchased four 20-slice CT scanners."

"So we brought the highest-end 20-slice CT scanners with the latest dose-reduction technology and were essentially able to make that meet the needs for all four of these sites at the reduced cost," he said.

The Vendor-Customer Relationship Is Evolving

Both Patel and Boussebaa also talked about the evolving customer-vendor relationship in the industry.

"It's not good enough today to come in and sell the CT scanner and then be gone," Boussebaa said. "What our hospital customers are looking for is a partnership. They're saying, 'look, we know everybody has reliable CT scanners, great image quality, but at the end of the day what really matters to us is that we have a great partner with whom we are going to do business with for the next 15 to 20 years and therefore, it's not enough to have a good CT scanner, you have to have solutions and services attached to it that are joining us on this journey for many years to come'."

"I think what would be great is for the manufacturers to continue to engage with physicians and with the administrators together, and continue to have the dialogue," Patel said. "Don't just have the dialogue when it comes time to purchase a piece of equipment, but after something is installed and during the lifetime of that equipment, have a longterm, ongoing relationship."

Patel said he has been involved with offering user input to several manufacturers during the design phase of a new device, and after those products are developed the hospital he works with typically ends up negotiating a reduced price to purchase that device so that the vendor can get feedback and Patel, as a provider, gets to use a device that he had input on.

It's a "win-win-win" for the vendor, the hospital, and the provider, he said.

Service contracts are also an important part of the equation, Boussebaa said.

"Let's say a hospital has only one system that is used for multiple specialties and that system goes down," he said. "Suddenly it's a major issue for the hospital because they have to reschedule patients, they're losing revenue for that day, and there's discomfort for the patients who want to get through [their exam] as soon as possible."

That said, not all customers are the same. Boussebaa described three basic types of customers Philips works with.

One type is the customer that says 'at the end of the day, I'm running a business and this business needs to be profitable, so cost is going to be the biggest stipulation'. Those are the customers that will typically bring multiple vendors to the table and establish a list of system criteria related to what they're trying to purchase. The vendor with the most complete list of specs at the lowest cost wins the deal.

Other customers are more clinically driven like Patel's organization in that they are looking for a partnership and they want to be able to do research together and have input on new innovations to help further the industry.

The third type of customer is the one who wants the best system with the best performance, they're not worried about cost as much as they are the service contract and shared-risk partnership.

And then there are "all flavors in between," Boussebaa said, with customers whose criteria falls somewhere between each of those types.

As Customer Expectations Change, Manufacturers Must Rise to New Challenges

Manufacturers like Philips must rise to the challenge to meet these shifting customer expectations because the competitive landscape is much different than it was 20 years ago, Boussebaa said.

A couple of decades ago there were essentially three big players in the imaging space – Philips, GE Healthcare, and Siemens – but over time several new entrants have emerged, which has raised the bar for suppliers.

"You need now to be excellent in all areas. You need to have the best innovation, the best service, and the best [partnership opportunities] for research," he said.

With the economic pressures facing hospitals today, manufacturers have to become more creative on how to reduce costs from the system while also maintaining the level of performance and service that customers expect. But that challenge is not unique to the imaging space, he said, that is something everybody in the healthcare industry is facing today.

There's also the expectation customers have regarding the speed of innovation. Boussebaa compared it to the automotive industry where today consumers are far more demanding when they go to buy a new vehicle and they want a car with all the latest features and performance metrics.

"In the healthcare industry, there is a far greater expectation about how fast we innovate and bring new innovations to the marketplace while reducing costs, reducing footprint, and maintaining [performance]," he said. 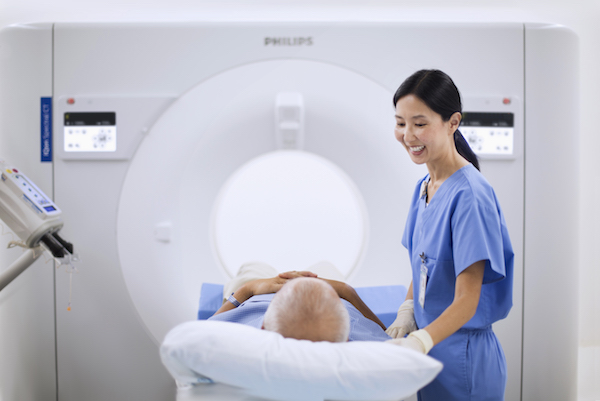 Boussebaa said Philips' IQon Elite Spectral CT Scanner, which debuted in 2017, is an example of how the company has responded to the shifting demands of customers in the value-based care era.

The IQon Elite Spectral CT was the first detector-based spectral CT of its kind, and Philips says it delivers more confident patient diagnoses in the first scan.

"When we designed that product originally it was all about precision diagnostics, meaning with the Spectra you'll be able to see far more details in your image," he said.

What ended up happening, he explained, is that the improved precision diagnostics that the new system offered ended up influencing economic benefits for customers as well because the clinicians were more confident in their diagnoses so they were less likely to re-scan the patient or refer the patient for an MRI to verify the diagnosis. That in itself is saving the customer time and money, Boussebaa said.

"The machine pays for itself over time, thanks to its ability to see better and satisfy workflow and execute scans in a more efficient way," he said. "That's an example of an innovation that was designed to improve clinical confidence but turned out to be a major economical play ... and that's really resonating with our customers."