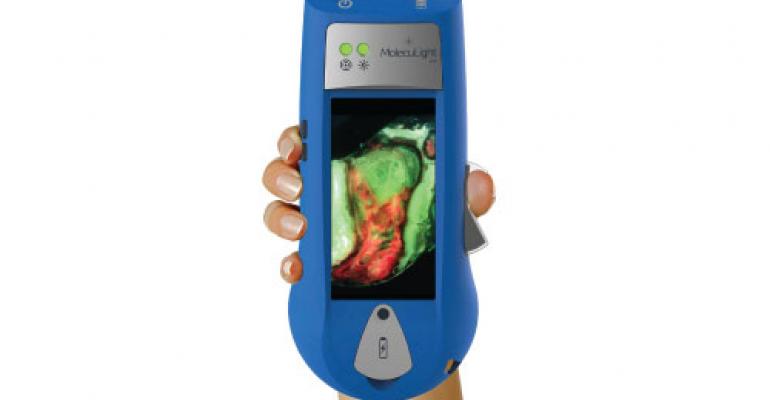 MolecuLight i:X is already available in Canada, where its inventor stumbled across the idea for the device. Ralph DaCosta, MD, now a principal investigator at Princess Margaret Cancer Center in Toronto, was a PhD student researching fluorescent imaging of gastrointestinal cancer in 2007. The big, expensive device he was using didn’t produce any green images, which would have indicated cancer, but a red image that he couldn’t identify.

DaCosta took a photo of the image on his flip phone and sent a tissue sample of the red area for a biopsy, which found a large number of bacteria. Conversations with colleagues led him to believe he was onto something that could help wound patients worldwide, he said in an interview with Qmed/MD+DI.

DaCosta began researching how to make a device that used only light -- no patient contact or contrast dyes -- to image bacteria in wounds. He filed for a patent in 2008 and conducted the first clinical trial on 30 patients the following year. He also began raising money and cold-calling CEOs of major wound care companies.

MolecuLight ultimately won Health Canada approval and a CE mark, and the company is pursuing FDA clearance, with an answer possible in spring 2018, according to DaCosta.

While MolecuLight is valuable for diabetic patients who suffer from hard-to-heal wounds, “it can be used for any wound, any opening in the skin where there’s a risk of infection,” DaCosta said.

Clinicians have traditionally assessed wounds with the naked eye. An estimated 2 million people are living with a chronic wound across Europe and an estimated 16% of all chronic wounds remain unresolved after a year or longer, according to a variety of studies cited in a statement by Smith & Nephew. Clinicians can use MolecuLight to create and store wound images and measurement data, guide wound sampling and debridement, monitor wound progression and improve patient engagement, the company said.

Conversations about improving wound care used to center on improvements in dressings.

Smith & Nephew launched MolecuLight sales in Europe in September, and the MolecuLight company, headquartered in Toronto,  expects FDA clearance in the summer of 2018, DaCosta said. The device is priced at $5,700.

“We are looking at other techniques to add onto the camera to and onto the value proposition for the entire care team,” he added.

The company is in a phase III clinical trial of a camera that can perform margin assessment during breast cancer surgery. It recently hired a new CEO, Anil Amlani, who has extensive experience in the medtech industry.