Finding Lung Cancer Outside the Airways Just Got Easier 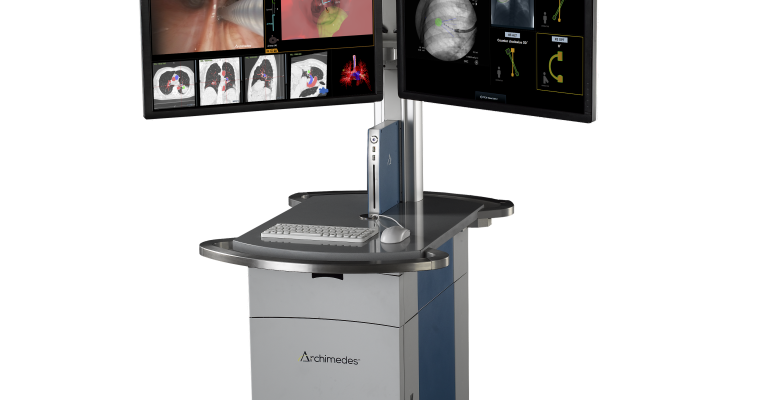 Diagnosing solitary lung tumors located outside of a patient's main airways has long been a challenge, but evidence is building around a technology designed to improve access to such tumors.

According to data unveiled this week at the European Respiratory Society International Congress in Paris, Broncus Medical's Archimedes virtual bronchoscopy navigation system helped to more than double the diagnostic yield for nodules with negative bronchus sign or an airway leading to the nodule.

The six-year-old, San Jose, CA-based company said the Archimedes System is the only system of its kind offering real-time virtual bronchoscopic navigation with embedded intra-procedure fused-fluoroscopic guidance, providing a 3D view and access to nodules anywhere in the lung.

“It has been historically challenging to accurately diagnose solitary lung tumors located outside of the main airways, especially when they are small, with diagnosis rates only in the 30% range,” said Felix Herth, lead author of the study and chairman of the Department of Pneumology and Critical Care Medicine at Thoraxklinik University of Heidelberg, Germany. “By pre-plotting a path to the nodule that avoids the vasculature and navigating through the lung anatomy with three-dimensional, real-time, fluoroscopic guidance, the Archimedes System demonstrated in this study that it aided in more than doubling the diagnostic yield of these challenging tumors to 77.8%, thereby significantly improving existing guided transbronchial biopsy.”

The multi-center study was conducted at five clinical sites and encompassed 18 single pulmonary nodules (SPNs) lacking an airway path for biopsy. The Archimedes System was used for bronchoscopic transparenchymal nodule access (BTPNA) to select an avascular path to a point of entry on the airway wall and to provide real-time navigation for hole creation, dilation, and biopsy.

These results demonstrate that combining virtual bronchoscopic navigation with fused fluoroscopy in the Archimedes System with bronchoscopy allows the bronchoscopist access to nodules located anywhere in the lungs. Prior to the Archimedes System, small nodules without a bronchus sign would have most commonly required a more invasive trans-thoracic approach requiring a puncture through the chest wall to access the nodule, Broncus said.

The company is currently enrolling at least 100 patients in a larger study of the Archimedes System, which is expected to be completed by the end of the year.

“The evidence is building that BTPNA under the guidance of our Archimedes System can navigate to and access nodules anywhere in the lung without major complications,” said Broncus President Henky Wibowo. “We are demonstrating that we can address a critical need in lung cancer by enabling accurate diagnosis of nodules, regardless of the presence of a CT bronchus sign, improving overall lung cancer diagnosis and treatment.”

Earlier this year, Medtronic and Philips unveiled the jointly developed LungGPS patient management platform. Part of the genesis of that partnership was the recognition that clinicians need better tools to help transform lung cancer from a death sentence to a more manageable disease.

Another company making strides in the way lung cancer is detected include Salt Lake City, UT-based ProLung , which has a radiation-free test intended for use at the front end of lung cancer screening and possibly as an adjunct to low-dose CT screening. Other companies, like Melbourne, Australia-based 4Dx, are working to improve lung function imaging.