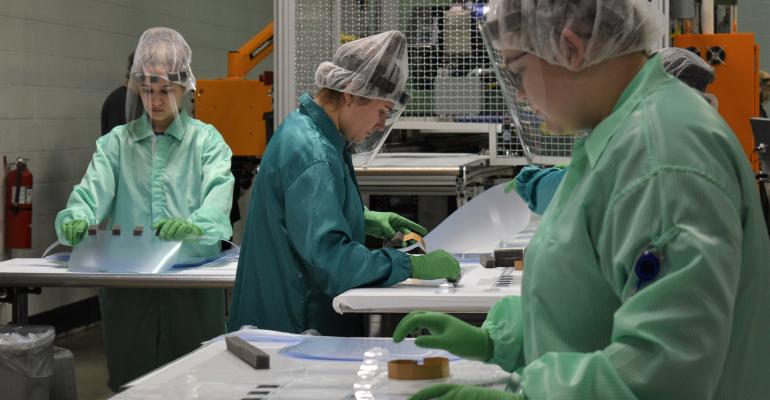 Prent Corp., a thermoformer of custom plastic medical device packaging, has designed a new face shield for healthcare workers and dedicated a new line to producing the shields, in just 48 hours. As of March 30, the company had produced and donated more than 20,000 shields to Mercyhealth Hospital and Trauma Center and other local healthcare facilities, Joseph Pregont II, vice president of corporate sales at Prent, told MD+DI. The company is planning to ramp up production to offer face shields to healthcare workers throughout the United States.

“We heard there was a dire need in our community and we knew we could help, so we dedicated a team to work on it immediately,” explained Pregont in a news release.

Pregont told MD+DI that Prent typically adds “a new line, which we build, in one of our facilities about every 6-8 weeks, which is what this line was. We have kept it out of our regular production to build these face shields.” Dedicating the new line in this way won’t impact the company’s other operations.

Because the shields can cover a healthcare worker’s entire face, they can be used to keep face masks clean, according to Prent. The company initially sought to create what it calls a “traditional face shield with three parts (shield, foam cushion, and elastic headband)” but then to expedite production decided to design a two-part shield made of only plastic and foam. Prent employees are shown wearing these face shields in the above photo.

Prent consulted Kathleen Agard, a doctor from Mercyhealth, during development. “Less than 12 hours after I first spoke to Prent, they had prototypes for me to see,” Agard stated in the release. “I’m really impressed that they were so responsive and giving of their time. The face shield is very important because it helps keep our staff and patients safe. ”

The shields are made from “scratch-resistant, recycled PETG plastic material from sister company GOEX,” Prent reported, and “the machine die was developed by local Millenium Die Group in just 5 hours.”

When asked whether the shields could be reused and if so, whether the plastic would stand up to disinfectants, Pregont told MD+DI that “from a material strength standpoint, yes, these face shields could be used multiple times, but I would have to defer to health experts if they should and how to disinfect. The plastic we are using is a copolyester, which generally can withstand disinfectants well.”

Prent estimated that it has the capacity to make millions of face shields per week and that it plans to continue making face shields until there is no longer a shortage at medical facilities.