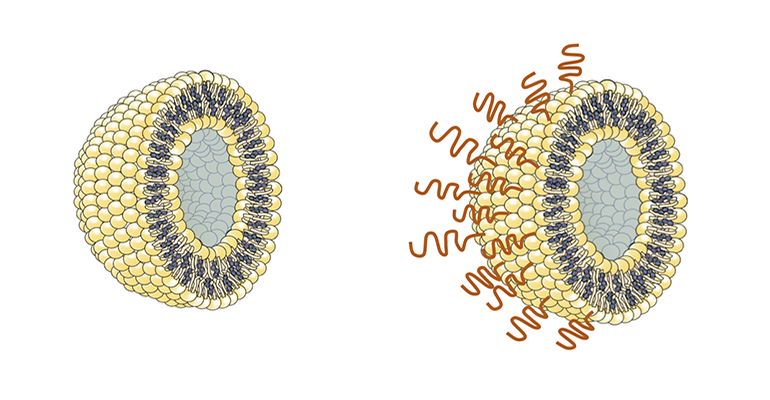 A liposome (left) containing a vaccine is commonly coated with polyethylene glycol (PEG), which can trigger an allergic reaction among some recipients. A newly developed lipid (right) could serve as a safer liposome coating while retaining the vaccine longer in the body.
The newly developed coating reduces the risk of anaphylaxis in vaccine and drug recipients, a rare but potentially fatal reaction to conventional polymer coatings.

Vaccines typically are encased in poly(ethylene glycol), or PEG, tiny spherical packages known as liposomes. In rare cases, the flexible, water-soluble polymer may cause an anaphylactic reaction in recipients, with symptoms ranging from skin irritation to nausea and, in extreme instances, unconsciousness and sudden death. Researchers at the National Institute of Advanced Industrial Science and Technology (AIST) in Japan have developed a polymer that could help deliver vaccines and drugs with a reduced risk of anaphylaxis.

The alternative polymer is a form of fatty biomolecule called a lipid, and is conjugated to 2-methacryloyloxyethyl phosphorylcholine (MPC) polymer. It spontaneously binds to the outside of liposome particles when mixed with them in water. When ingested, the polymer is not recognized by antibodies that can be generated in response to PEG, according to the researchers, and tests suggest it does not stimulate any other antibodies that could cause an allergic reaction. This should allow coated liposomes containing a vaccine to be retained in the body for a longer period of time without being cleared by the immune system, in addition to avoiding anaphylaxis.

“We have also found that the polymer avoids other interactions with proteins in the blood that might otherwise interfere with its effects, and it also prevents liposomes from aggregating together,” said molecular engineer Yuji Teramura of the AIST team.

“All the indications suggest that our technology should be suitable for delivering vaccines into patients who develop anaphylaxis in response to PEG,” Teramura added.

An article in Science and Technology of Advanced Materials describes the research.

Next step for the researchers is to test the polymer in various real vaccine applications. Provided the animal and subsequent clinical trials go well, the technology should offer opportunities for delivering drugs, in addition to vaccines, into the body. Delivery systems such as liposomes are sometimes needed to protect drugs from biochemical processes that might degrade them. This can ensure that they reach the target disease tissues while remaining in their active form, said the researchers.

A liposome (left) containing a vaccine is commonly coated with polyethylene glycol (PEG), which can trigger an allergic reaction among some recipients. A newly developed lipid (right) could serve as a safer liposome coating while retaining the vaccine longer in the body.