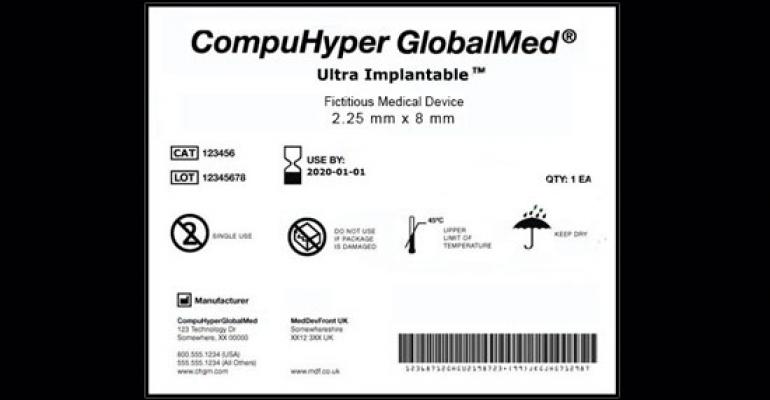 The agency received 270 comments on its proposed rule for a unique identification system for medical devices, and a number of the industry's requests were reflected in the final rule.

FDA today released its long-awaited final rule on a unique device identification (UDI) system for medical devices, and it makes several concessions to the industry.

The final rule comes nearly six years after the FDA Amendments Act of 2007 authorized the agency to establish a UDI system and more than 14 months after the agency issued its proposed rule on the matter. Individuals, organizations, and industry players submitted 270 comments, and FDA incorporated a number of the suggested changes into the final rule.

“Industry is going to be happy,” says Frank Pokrop, director of regulatory affairs at Carefusion and chairman of MD+DI’s editorial advisory board. “FDA made a point of being very interactive and responsive to industry comments.”

For starters, the final rule does not require direct marking of implantable medical devices, which would have required manufacturers to request supplemental approval for such products.

The file rule also allows single-use devices sold in multipacks to carry an identifier on the package as opposed to on each discrete device.

“Some of these packages have 20, 30, or 50 parts in it, and if you only have to put one UDI on [the package] as opposed to [each single-use device], that’s much simpler, much easier to manage,” Pokrop says.

Other significant differences from the proposed rule include the following:

Makers of Class III devices will have one year to display a unique device identifier on their products, though companies can petition FDA for a one-year extension. Implantable, life-supporting, or life-sustaining devices outside of Class III will have two years to comply. Class II devices must display a unique device identifier within three years, while Class I devices must comply with the rule within five years.

That's a timeline the industry should find acceptable, Pokrop says.

"People should already know about this by now," he says. "It's been talked about for years, and some of the larger Class III comapnies, they've already got this done and in place. There should be no surprises. Everybody would like more time, but industry should be OK with this."

The unique device identification system will require the lion’s share of medical devices to be labeled with a number identifying the version or model and including information such as lot or batch number, expiration date, and manufacturing date when it appears on the label. Unique device identifiers will be catalogued in a publicly searchable database administered by FDA.

The UDI system is intended to help identify medical devices quickly and efficiently when recalled, improve adverse event reports, and help companies secure their distribution chains, according to FDA. But Laura Bix, associate professor in the school of packaging at Michigan State University, says it could help bring transparency to the healthcare system by enabling CMS, for example, to track the effectiveness of specific products.

"I think that's really part of the intention, being able to look at how effectively they are spending those precious few healthcare dollars they have," Bix says.

She also gives FDA high marks for its engagement with industry in establishing the final UDI rule.

"I think FDA has done a very good job of being pretty transparent with everything," she says. "They set up the UDI information Web site quite some time ago, and it's been easy to track what's been happening...If you're not prepared, it's really because you haven't been paying a lot of attention."

"Jay Crowley, [senior advisor for patient safety at CDRH], should really be commended for all his hard work and diligence on this," he says. "FDA's been very good about offering consultatins and exemptions. It’s a major change for the industry, but everybody should be happy with it."

“While we continue to review this final rule, it appears that FDA addressed a number of issues raised by stakeholders,” Mark Leahey, president and CEO of the Medical Device Manufacturers Association, said in a statement.

"...AdvaMed commends FDA for addressing many of the concerns industry raised in the proposed rule," she said in an e-mailed statement. "We have long supported a UDI system for medical devices that, if appropriately implemented, holds the promise of more accurate and useful postmarket surveillance and more rapid medical technology improvements. And this rule is a good step toward achieving that goal."

Still, Trunzo said, “implementation of a UDI system will be a costly and challenging endeavor."

The rule will be published in the Federal Register September 24, 2013, and goes into effect 90 days later.